First off, in the NBA, if you give a team not named the 76ers 17 points on the spread, you should lay the hammer. That applies in this one.

I get it. The Pelicans are the only winless team in the Western Conference at 0-6 and injuries have derailed their roster. Lance Stephenson is the latest Pelican to catch the injury bug. New Orleans is already depleted at the guard position with Tyreke Evans and Jrue Holiday sidelined.

However, this is a Pelicans' team that has a lot of fight in them. Aside from one double-digit loss to San Antonio, New Orleans lost five of their games by an average of 4.8 points.

Moreover, the Warriors aren't exactly the superteam we expected. Of course, it's early and Golden State can very well become that all-time great team many thought they would, but their 2-4 against the spread thus far. The Warriors are licking their wounds after a 20-point loss to the lowly Lakers, knocking them down to 4-2. Amazingly, Golden State didn't lose their second game until December 30 last season.

These two teams already met once, with Warriors edging the Pelicans 122-114 in New Orleans. Anthony Davis took advantage of Golden State's lack of size in a 47-point and 17-rebound effort. Expect Davis to continue his monster season as he enters the matchup fifth in scoring and seventh in rebounds across the NBA. 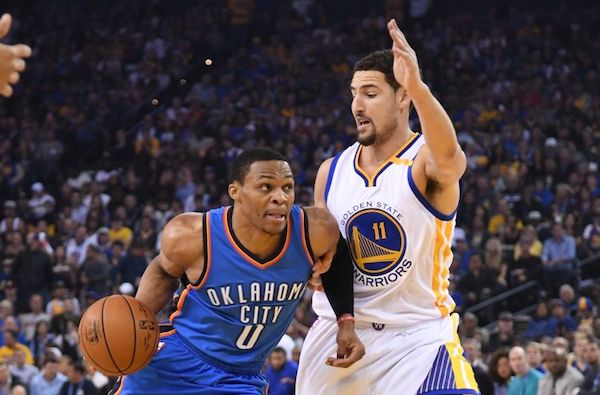 Despite a 26-point rout courtesy of former teammate Kevin Durant and the Warriors, the Thunder are still one of the best teams in the West. The loss came on the heels of nail-biting win against the Clippers the night before. Instead of judging Oklahoma City on that tired effort, look at their other five games, where they are undefeated.

Three of those wins have been by double-digits, including the latest 20-point victory against the Timberwolves. Russell Westbrook is on a tear and a triple-double threat each game. Westbrook is averaging 33 points, nine rebounds, and nine assists in six games. Moreover, Victor Oladipo is proving to be a solid sidekick with a 15-point per game average.

For the Heat (2-3) to have a chance in this road game, they'll need to find production from a player not named Hassan Whiteside. The max-contract player has double doubles each game this year and is averaging 20 points and 14 boards per game. Miami might find that outside production from starting shooting guard Dion Waiters, who will be facing his former team.

Waiters left the Thunder in the offseason, but has been maddeningly inconsistent with the Heat. He went off for 20 points two games ago, then followed that up with a four-point outing.

Oklahoma City is a tough place to play in and with the superior team, the Thunder will cruise to victory.

This matchup features two of the best teams in the league at hitting the over. The Suns are 4-2 in overs, while Portland is 5-2. Together, the teams are averaging a whopping 215 points per game. Between Damian Lillard, C.J. McCollum, T.J. Warren, Devin Booker, among others, there will be scorers all over the court.

History suggests defense will be non-existent in this one. The two teams met last week with Phoenix gutting out a thrilling 118-115 overtime victory.  Point guard Eric Bledsoe provided the heroics, with a buzzer-beating three-pointer in front of the home crowd.

The rematch shifts to the Moda Center where Portland has one of the fiercest home-court advantages across the league. It will be loud, which doesn't bode well for the turnover-prone Suns. Phoenix is averaging 15 turnovers per contest — just two away from the league leaders. Expect the Trail Blazers to take advantage of the errors for easy buckets to push this game past the over.