Rookie Kareem Hunt of the Kansas City Chiefs was named AFC player of the month this week, while Todd Gurley of the Los Angeles Rams took the honors in the NFC. Both running backs lead the league in scoring with six touchdowns. Hunt is also the first player in NFL history to have a touchdown of at least 50 yards in each of his first three games.

Hunt and Gurley also led their teams to victory last weekend, and that’s what counts in this league. Let’s try and pick two winners against the spread in a Week 4 NFL parlay (odds provided by bovada.lv). A $25 parlay bet of New Orleans (-3) over Miami and Denver (-3) over Oakland pays $70.30. If either team fails to cover the spread, the ticket is void.

That’s a Lot of Air Miles

New Orleans over Miami — Hurricane Irma forced the Dolphins to leave Florida earlier in September and head to California to practice. They beat the Los Angeles Chargers in their opener and then traveled across the country last weekend to play the Jets. After a loss in New York, the Dolphins (1-1) now cross the Atlantic to battle the Saints in London, England. Miami may not be leading the league in wins, but they are at the top in air miles.

New Orleans (1-2) comes into their fourth game of the season off a huge win in Carolina where they dominated the Panthers. Drew Brees threw for 220 yards and three touchdowns. Now he faces a Dolphins defense that has allowed the highest passer rating in the NFL to opposing quarterbacks. The Miami D is also allowing 8.6 yards per pass play, the worst mark in the league.

This could be a long day for the Dolphins secondary.

Miami’s offense was dismal against the Jets. They must make major improvements, or this game could be over in a hurry. The Dolphins, playing one of the worst teams in the league last weekend, scored on the game’s final play to avoid a shutout. They lost 20-6. 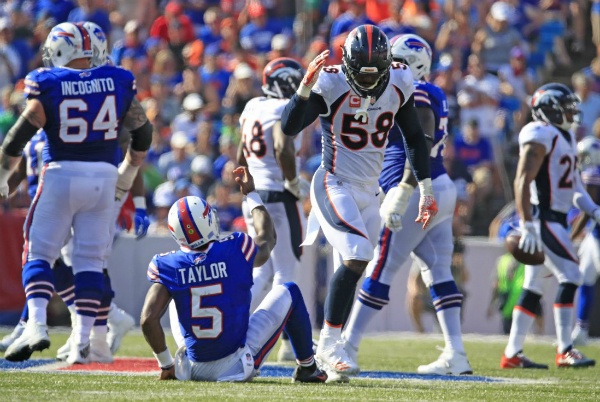 Denver over Oakland — These two teams don’t like each other. They have been in the same division since the AFC West was started in 1960, so they have a lot of history. Both have won three Super Bowls and both would like nothing more than to beat the other, especially when divisional games like this can have huge playoff implications at the end of the season.

Here’s the thing, though.

Both teams were undefeated and favored heading into their Week 3 matchups. They both lost. The Broncos (2-1) looked respectable in defeat, the Raiders (2-1) were downright awful.

In the Raiders prime time loss to Washington, they gained just 128 yards in total offense. It’s not like the Redskins are an NFC powerhouse, not yet anyway. And what has happened to Amari Cooper? He’s caught 10 passes all year and just one last weekend. He’s now questionable for this game with a knee injury. The Raiders need Cooper at his best to make any playoff run at all.

Dallas traveled to Denver in Week 2 and were crushed by the Broncos 42-17. Ezekiel Elliott gained just eight yards. The Raiders have their work cut out for them in a very unfriendly environment.