What is Pedigree Handicapping?

As the three-year-old colts that will race for the Kentucky Derby championship have moved through their racing careers, they've stretched further out in distance, with most starting to race at six furlongs and progressing from there. The last five major qualifying races for the Derby were all run at 1 1/8 miles, but with the exception of European-based Mendelsshon, none have raced further than that, and not even Mendelssohn has run the Derby distance of 1 1/4 miles.

Whether any horse in the Derby has the ability to win a race at that distance is the great unknown factor that makes the Derby particularly intriguing as a betting race. At the same time, figuring out that question requires handicappers to delve a bit into a horse's pedigree, trying to figure out if past results of the horse's sire and dam line indicate the horse has the breeding to last the distance.

There are lots of sources for pedigree information on the Derby horses, and almost any type of past performance information will include the name of the horse's sire, dam, and damsire, or grandfather. With those names, you're able to search online databases such as at Equibase for North American horses and The Racehorse in the UK. On these sites you can easily click through a horse's bloodlines and find past racing records and results. 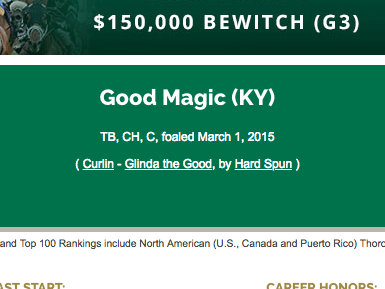 From there it's just a matter of looking at the race results going back a couple generations on each side and looking at whether the horse has wins - or was at least competitive - at longer distances or not. Usually you'll find distance races more on the sire side than the dam, partly because there are very few races for female horses in North America beyond even 1 1/16 miles.

You'll often find dams that actually never raced, but that alone isn't necessarily a reason to completely dismiss the horse, and why you need to look into the results back a couple generations. An unraced dam could be out of a sire or grandsire that was a Grade 1 winner at 1 1/4 miles.

You're also often going to find on one side or the other, but usually with the dam, that she was a pure sprinter, never running beyond six or seven furlongs. The question then becomes whether she was winning those races or not, at what level, and what was her running style? If she was winning by stalking the lead and taking over in the stretch, she may have been able win going further if asked. If she also shows any distance ability from her sire or grandsire, that may indicate distance ability in her offspring.

Obviously, if you find successful distance pedigree on both sides of a horse's line, you can be reasonably sure the distance in the Kentucky Derby won't be a problem. There's a line of thought that having a great sprinter on one side together with a great distance horse on the other is the ideal pedigree for a thoroughbred, but you want to find that distance ability somehwere in the horse's background, and the more, the better.

Pedigree Examples in the Kentucky Derby

Taking the the horses at numbers one, five and ten on the current Kentucky Derby qualifying leaderboard as random examples we'll look at the pedigree information for Good Magic, Bolt d'Oro and Bravazo:

This is just a superficial look into the pedigree of these horses, but it gives the general idea of what to look for, and indicates that all for all three of these, and especially Good Magic and Bolt d'Oro, distance doesn't have to be a handicapping concern.

Other Pedigree Factors in Horse Racing

Some handicappers place a lot of emphasis on pedigree, and a person could spend a lot of time teasing out information. Other things to look at are the race results of other offspring - the brothers and sisters of the Derby horses - to determine whether a certain sire or mare consistently produces good distance horses. It's also a fact that certain sires will produce one or two crops of very good horses in consecutive years early in their breeding career, and any offspring of these "hot" sires at the time is worthy of a second look in handicapping.

One other aspect of pedigree that is often considered is the type of surface the horse's sire and or dam line have been racing on. This is less of a consideration for the Kentucky Derby, as the vast majority of the qualifying races are run on dirt, as is the Derby, and by virtue of being in the field it's a given that the Derby horses have a proven ability on a dirt surface.

It is worth noting, however, that the above-mentioned Mendelssohn has only raced once on dirt - winning by a huge margin. Expected UK-based Derby starter Gronkowski has won on all-weather track surfaces, but has never actually run on dirt.

Betting Pedigree at the Kentucky Derby

Once you've weighed all the handicapping angles, and you've decided which horse has the right combination of form, class and pedigree to win the big race, you can make a more confident bet at Bovada or another top-rated online racebook.