A popular futures betting line is the relegation market for the English Premier League. Wagering on this market is simple, all that you need to do is choose one of the 20 Premier League teams and if they finish in the bottom three places in the table come the end of the season, you win your bet.

Bookmakers price Huddersfield Town as the favorites to be relegated from the Premier League this season and the only team to be odds on for the dreaded drop to the Championship. While bookies do sometimes get this market wrong, I have to side with them because I cannot see the Terriers staying up. They do not score enough goals, they concede too many at the other end, and there recruitment during the summer has not been Premier League quality. I would be surprised to see them amass 30 points over the 38 game season. 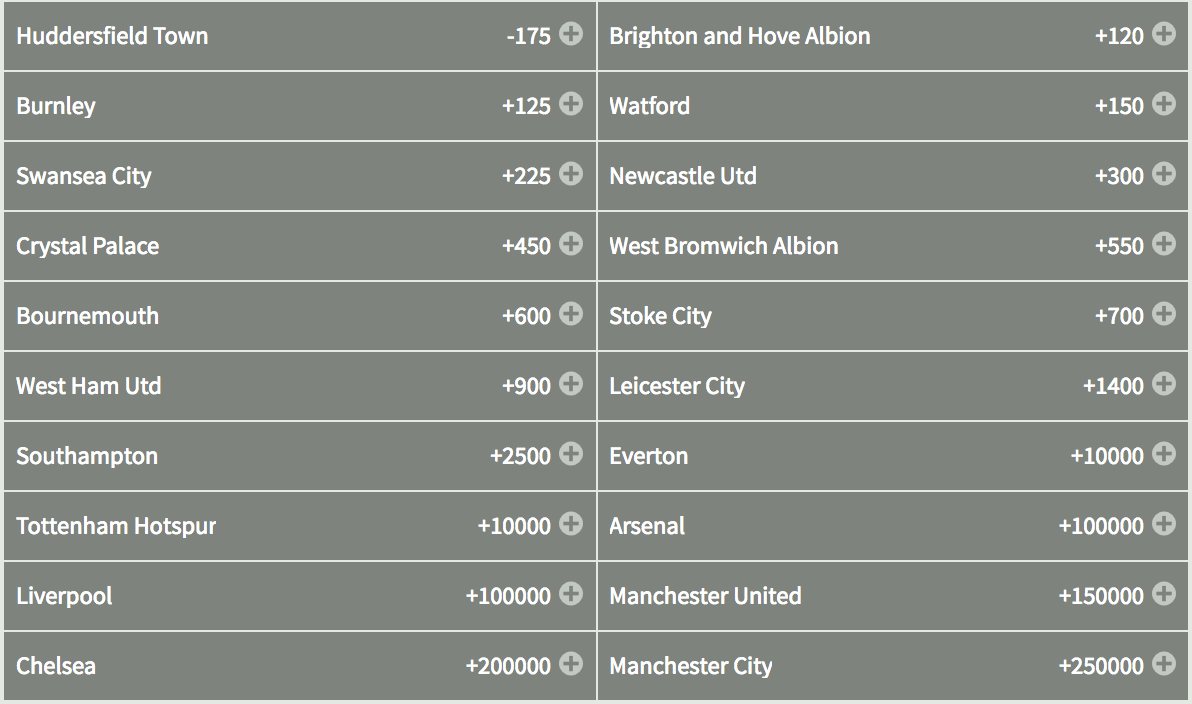 Looking at the odds to stay up, it looks like bookmakers have Huddersfield as being doomed then the other two relegation places being contested by Brighton, Burnley and Watford. Of those sides, I believe Brighton will struggle due to a lack of investment and although Burnley seem to struggle in front of goal (they only scored 39 goals last season) they are defensively sound and that should stand them in good stead. I’ll be opting for Burnley to stay up at -165 because I think Swansea will be one of the teams, with Brighton and Huddersfield, to be relegated.

Last season’s relegation battle almost went down to the wire because there were several teams who were not mathematically safe going into the last few games. Both Crystal Palace and Swansea City rallied late to ensure Premier League survival while Burnley and Watford finished six points clear of the drop zone. Palace aside, I expect all those teams to struggle again this season so it may be worth checking out the futures lines for those teams to be relegated.

Swansea City were awful last season, particularly in defense where they conceded 70 goals. Only relegated Hull, with 80, conceded more. The Swans look like they could lose their two star players in Gylfi Sigurdsson and Fernando Llorente and if that happens Swansea could be in serious trouble and those +225 odds on them being relegated could be a real bargain.

One team that nobody seems to be talking about is newly promoted Newcastle United. Promoted teams traditionally struggle and I can see the Magpies following this trend. There haven’t been any marquee signings by Rafa Benitez’ team and although Newcastle went up as champions, there squad isn’t Premier League quality throughout.

There are certainly three teams worse than Newcastle in the Premier League this season, but those +300 odds on the Geordies being relegated do look tempting.