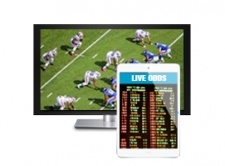 It can be hard to keep track of when betting lines are first released for individual games and tournaments. Every sport is different. Some grant you plenty of notice. Others are more fluid out of necessity. Our look at Bovada's updated posting schedules across the board ensures you won't ever wonder when to check out the freshest lines. Bookmark this page immediately. You won't regret it.

The NFL is an anomaly among the four major North American leagues. Games are played three nights a week, and most teams have a full seven days in between contests. Bovada does a great job getting odds up for the following week on Sunday night. Jumping on these initial projections is a great way to maximize your return before oddsmakers adjust the lines to reflect the opening action. At the same time, if you're worried about injury reports or player returns, you're better off revisiting the spreads during the middle of the week, most likely on a Wednesday, when money lines drop.

College football is similar to the NFL, in that teams are only playing once a week. So you'll want to follow the same protocols. If you're not waiting to hear about key injuries or news, pounce on the opening spreads sometime Sunday night, before the lines move throughout the week. Otherwise, if you're waiting for storylines to develop or updates on available personnel, revisit the spreads on Wednesday, once the money lines get sent out to the masses.

Betting on the NBA doesn't afford you the same luxuries as the NFL and college football. Teams play a few times a week, often on consecutive days. Lines move quick, so you'll want to act immediately and decisively when the situation calls for it.

That being said, don't rush the process. Definitive lines drop around 11:30 a.m. ET on game day. If you're waiting to hear whether a star player is suiting up on the second end of a back-to-back, or whether an injured player is sitting out, it's best to ride out the process until early evening. But try making your decision no later than two hours before tipoff, to maximize your returns. If you're still not sure by then, simply pass on the game altogether.

Though college basketball teams don't play nearly as often as the pro squads, lines still don't go public until the day of. In this situation, it's best to act immediately.

Collegiate round-ball teams aren't prone to offering late scratches, and with the exception of the March Madness tournament, you'll have had at least a few days in between the last game to monitor any availability issues. So either place your bet at 12 p.m. ET (or 5 p.m. ET should you be wagering on money lines) or defer until the next slate of games.

*For early games the odds will be available 2 hours before the game.

If you're betting MLB money lines, submitting your wager the night before the game, when they first release, is best. But if you're in the runlines biz, you have some flexibility. These lines aren't huge to begin with, since baseball is an inherently low-scoring game. So unless you're trying to capitalize on a larger-than-normal spread—something like four or more runs—feel free to wait for morning and midday the night of games to see whether anything about either team has changed.

The NHL combines elements of MLB and the NBA. On the one hand, the low-scoring nature of the sport gives way to dead-evenish moneylines and curtailed totals. On the other hand, though, the day-of posting times don't allow you to act too far in advance. Your best course of action is to submit early. Hockey teams don't rest a bunch of players at a time, and the absence of one or two guys in a sport with so many in-game line changes won't impact the betting lines too much.

*Closed during any tournaments and reopened after the games.

Gambling on soccer can be a tad complicated. You're dealing with a low-scoring sport with varying windows of line releases, as you can see below. For tournaments in which odds are delivered well in advance, you're probably best suited hitting the early action, especially if you're investing in what figures to be a popular bet. For more imminent matchups, bet the evening before whenever you can, since the closely contested nature of these sparrings won't give way to any favorable line adjustments later in the process.

The approach to betting on golf is simple: Place your bets as soon as the lines release. You typically know well in advance whether players are or aren't participating in the upcoming tournament. If you're worried about them suddenly pulling out, the official solution is just not to bet on them. For mid-tourney bets, stick to investing in underdogs. The foremost leaders on the scoreboard won't get great odds, so you don't want to bet on the top one to five finishers—particularly during the first two days of action, when the leaderboard is prone to more stark swings.

Tennis' betting process is similar to golf's, only you have more time to plan your macro, tournament-winner bet. Unless you're worried about a player recovering from injury or equivocating on whether they'll participate in the festivities, pick a winner early. If you're betting strictly on individual matchups, you have more leniency. The odds won't change much in that 12-hour window unless they're abnormally disproportionate.

*Odds will remain closed during practice or qualifying.

Follow the betting rules of golf with NASCAR. You know who's partaking in the upcoming race for a while. Don't be afraid to submit wagers at the release of the lines. Tweaks to the docket are seldom made, and the earlier you bet, the better odds you should get.

When wagering on futures, you're going to get the most lucrative returns early in the process. We sound like a broken record; we know. But this advice is particularly paramount—infinitely so if you're betting on big-picture futures, like inevitable champions. Title favorites won't get better odds as the season unfolds, so the offseason is a great time to invest.

If you are going to holster your wager, trying waiting until a favorite hits a rouch patch you know they'll escape. Odds on futures are very reactive, so you'll want to time your bets just right to maximize your potential winnings. Of course, if you're working the underdogs, you're pretty free to bet whenever, so long as it's before they begin an upward trek in the championship pecking order.

Horse racing allows you to bet as soon as possible with a layer of protection. If, for instance, you place a future bet on the winner for the Kentucky Derby when those lines are released on Tuesday at 2 p.m., and the horse in question is inevitably scratched from the docket, your wager will go down as a "no action," and you'll keep your money. Odds for more imminent races will be posted by 3:30 p.m. ET two days in advance.  Those lines won't shift too much over those 48 hours, so you have a bit of leeway if you like to place last-minute dice rolls.

Help Yourself to Apps

Remaining up to date on the latest news, injury reports, tournament participants, etc. is an imperative part of successful sportsbetting—especially if you're investing in teams that play on a daily or semi-daily basis, such as those in the NBA, NHL and MLB.

Downloading certain apps onto your mobile phone is best way to stay in the real-time loop. Some sportsbooks will offer their own options, but you can also install apps from ESPN or Bleacher Report and tailoring them to the sports and teams you're most likely going to bet on. This way, if something pertinent to the lines takes place—like a trade, injury or participation scratch—you'll be among the first to know and can place your initial bet or adjust a previous wager accordingly.