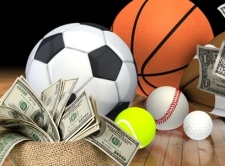 You like betting on sports. Most of all, you enjoy betting on the NFL. You see that the Dallas Cowboys are three-point favorites at home against the New York Giants, and you figure that's a good play, so you take the Cowboys for $100 and and give the points. You're feeling good about your wager, but the next thing you know, Dallas is down to a two-point favorite. And then the day after, the odds drop to Dallas minus-one. Now you are worried. Does somebody out there know something that you don't?

Relax. There's no reason to panic. Lines move all the time in the sports betting world, and it may have absolutely nothing to do with something being wrong with one of the teams. There are myriad reasons why a line on a game will move, and we're going to explore some of them right now. But first of all, let's discuss an example of an actual line movement.

We're going to talk about the line movement that occurred during the days leading up to Super Bowl LII between the New England Patriots and Philadelphia Eagles. Sportsbooks originally established the defending Super Bowl champion Patriots as 5.5-point favorites over the NFC champion Eagles. Within a matter of a couple of days, that line had been reduced and now the Patriots were only 4.5-point picks to defeat the Eagles.

What caused this seismic shift in the line? Well, there were actually a number of variables in play here. There was huge money being wagered on the underdog Eagles, including a reported multi-million dollar bet. Some of that was generated due to Philadelphia's impressive 38-7 rout of the Minnesota Vikings in the NFC Championship Game, while the Patriots required a fourth-quarter rally to topple the Jacksonville Jaguars in the AFC Championship Game.

There was also the hatred factor. The thing about dynasties, whether it be the Patriots in the NFL, the New York Yankees in MLB, the Golden State Warriors in the NBA or the Pittsburgh Penguins in the NHL, is that they are really a lot like the views Americans hold of U.S. President Donald Trump. You either love them, or you hate them. There is no middle ground in this debate. When it comes to the Patriots, some people bet against them simply because they can't stand them.

Another key factor in the shifting line was injuries. Patriots all-world quarterback Tom Brady was nursing a cut on his throwing hand, while All-Pro tight end Rob Gronkowski was an uncertain starter due to a concussion. That's two key cogs - arguably the most important pieces - in the New England offense that you knew going into the game were unlikely to be at 100 percent efficiency.

They've Got To Move It, Move It

Regardless of the circumstances, line shifting is a natural and organic occurrence in the sports betting industry. It shouldn't necessarily strike fear into you if you've already wagered on the game. But like any other aspect involved with wagering on sports, it's the wise bettor who is the best bettor. If you've already got your bet down and you see sudden movement in the line, look into it. Discover the reasons why and act accordingly.

If it appears that there is legitimate cause for concern in the shift in the line - let's say that bet you played on the Cowboys has gone in the other direction, and now Dallas has grown to a seven-point favorite over the Giants - it might be time to consider middling your bet. In this scenario, you place a second wager of equal amount on the Giants at plus-seven.

In that instance, were Dallas to win the game 21-17, you'd cash in on both your bets - Dallas would have covered at minus-three but the Giants will have beaten the plus-seven spread. This situation doesn't develop very often, but when it does, it's a uniquely profitable method to take advantage of line movement.

The No. 1 cause for adjustments in the line is the money wagered on a game, and more specifically, to sudden and major action on one side of a wager. In the case of Super Bowl LII, the line movement was in reaction to significant wagering on the underdog Eagles.

A sportsbook, like any business, is in the business of making money. When they move the line, it has nothing to do with their opinion of either team or player involved in the wager. The oddsmaker is merely seeking to balance the book. They want to see the same amount of money wagered on both sides of any bet, so the sportsbook is ensured of making a profit no matter who wins the game.

By moving the line, they are looking to encourage wagering on the side of the bet that is moving slowly, while discouraging action on the other side of the wager. In the mind of a sportsbook, a perfect world is when 50 percent of the money wagered on an event is on each side of the card.

Other Causes of Movement

As mentioned earlier, injuries can play a major role in sudden line movement. Think of last season, when red-hot Houston Texans quarterback DeSean Watson suffered a season-ending knee injury in practice just four days prior to their next game. All of a sudden, the Texans were no longer the same team. That impacted betting on their next game, and in turn, caused a significant shift in the line on the game.

The sharps - professional bettors - can also move a line by wagering heavily on a favorite. Bookmakers will give more credence to a large bet played by a pro player, because they recognize these bettors have strong connections. But the general betting public can also dramatically move a line. Consider the 2017 boxing bout between boxer Floyd Mayweather UFC fighter Conor McGregor. There was so much public action on McGregor, that he dropped from a plus-950 underdog all the way down to plus-265 by fight time.