Over Under Betting Strategy 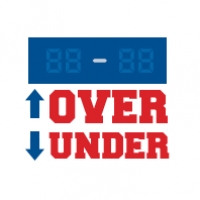 Betting overs and unders is routine practice for most sports gamblers. Point spread wagers are more popular, moneyline investments are simpler and parlays can be more lucrative, but over and under plays are arguably the second-most common wager among sportsbook users. Though you are not necessarily betting on the outcome of the game, over/under wagers to take acute knowledge to execute. [+]

Team play styles, injury reports, game locations, past results and everything in between plays a part in shaping the final score—which, remember, is the object of any over/under venture.

What Is An Over Under Bet

Over/under bets are simple enough to understand: You're deciding whether the combined final scores of both participating teams at the end of a game will be below or above a certain number.

Let's go through some examples.

Sportsbooks often like to use inexact—so, impossible—over/under totals to avoid push situations. If the over/under for an NBA game is tabbed at 202.5, the under banks on the final score totaling 202 or less, while the over estimates it'll be 203 or higher.

When whole numbers are involved—say, 52 points for the over/under of an NFL game—potential pushes are at play. If the participating teams combine for 52 points, you neither win nor lose; your money is returned to your sportsbook account.

Some websites will charge a fee—a percentage off the top—if there is a push. There are some that will record your wager as a loss, too. Keep those tidbits in mind when going on the hunt for reputable and appealing sportsbooks.

When To Make Over Under Bets

There are many instances in which betting overs and unders make sense. In the best cases, the teams you're betting on will have clear identities—play styles that clue you in to how much or little they will score.

The NBA is a perfect case study for this, which is why over and under wagers are so popular in basketball betting circles.

In the event you have two top defenses squaring off against each other, you can expect an inherently low scoring total. If you're dealing with two high-octane offenses, the over comes into play.

The projections change if participants are more balanced; teams that dominate on both ends of the floor, field, pitch, etc. are arch enemies of the over/under, since it's harder to project which side of the ball they will be better on. But if you can detect an identity, a specialty, be it offense or defense, you can determine whether a team is a good over/under gambit.

Pace of play is an important factor when deciding on overs and unders as well, no matter which sport you're betting on.

Take the Brooklyn Nets of the NBA. They aren't a good offensive or defensive team, which would suggest they don't really have viable over or under appeal. But they're also the fastest team in the league. Playing at such high speeds will drive up their number of possessions, which in turn increases the number of scoring opportunities they will have. Even if they aren't hyper-efficient, they will get enough touches for their scoring total to explode. The same can be said for their opponent, even if they too aren't a good offensive team. They are going to get extra possessions as well, allowing their final tally to balloon. So that makes the Nets great over investments.

It works in the opposite way for slow teams. The San Antonio Spurs and Utah Jazz are very efficient offensive squads, but they play so slow it's not worth working their over—especially when their limited number of offensive sets are combined with stingy defenses.

Scoring methods should be taken under advisement as well. If an NBA or college basketball outfit shoots and makes a ton of threes, it instantly becomes a good over play. If an NFL or college football squad likes to throw the ball a ton, go for two-point conversions and avoids kicking field-goals, it will also be a good over option. Apply the inverse to each scenario, and you'll end up with great under ventures.

Over/under betting is all about monitoring the participants. Their play styles and scoring tendencies should help you figure out whether they're a team prone to high-scoring affairs or low-scoring competitions.