How To Profit Off Line Movement 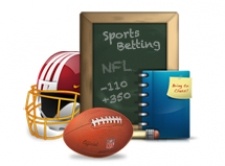 Balance is a vital compenent in virtually everything. A healthy lifestyle involves eating right, regular exercise and getting enough rest. That doesn't mean you can't order pizza, or eat a bowl of ice cream and a piece of pie. It merely means that you do it in combination with the other elements mentioned. It's OK to splurge, but don't binge. Everything in moderation is the best policy.

Believe it or not, that's also the wisest course of action in the sports betting industry. Sportsbooks are all about balance. Oddsmakers are well aware that in order to keep the ship moving efficiently, they cannot allow it to list to one side of the other. If wagering grows too heavy on a favorite, then they need to act immediately in order to initiate more wagering on the underdog. It's not just a case of wanting to be fair to both sides of the bet. For the sportsbook, it's a matter of survival.

That is why betting lines move. Sportsbooks are not registered charities, nor are they non-profit organizations. They are businesses, set up to make money in the profit margin system that is capitalism, and hey, there's nothing wrong with that. If you ran a business, would you set it up to fail? Of course you wouldn't. This is why flexibility and sometimes even volatility can take place in a betting line.

When a sportsbook's oddsmaker sets the opening line, they do so by utilizing a variety of elements. They will look at the history of the match up, with special emphasis always placed on home and away records in head to head meetings between the teams. Recent trends will also be viewed. Is one team on a roll, while the other team keeps getting rolled? Of course, injuries are a major factor in the line, especially ailments at any of the skill positions, the players who generally have the most impact on the outcome of the game.

Let's look at a hypothetical situation to explain how and why the line on a game would move. Suppose the Pittsburgh Steelers are three-point picks to win on the road against the Bengals in Cincinnati. The opening line is posted and the vast majority of the money is being wagered on the Steelers to cover. This puts the sportsbook in a precarious position, because if Pittsburgh does win and cover, they stand to pay out a substantial amount of money and take a major financial hit.

To combat this potentially devastating loss, what the sportsbook does is adjust or move the line. They might bump the Steelers to minus-five and see the impact that has on wagering. If that doesn't do the job and entice more wagering on the Bengals, you might see the line move again to Pittsburgh and minus-seven. The objective of this line maneuvering is to encourage increased wagering on the underdog to a point where the wagers are split 50-50 between favorite and underdog.

Sportsbooks take juice or vigorish, as it's also known, generally to the tune of 10 percent on wagers. But if they are paying out on 70 percent of all the bets they take in, that 10 percent isn't going to help much. They'll be hanging a going out of business sign on their door in rapid fashion.

It Keeps Going And Going...

Perhaps the greatest example of vastly fluctuating line movement in recent years came during the 2017 boxing bout between world champion boxer Floyd Mayweather Jr. and UFC world champion Conor McGregor. McGregor had never boxed professionally prior to this fight and he was about to step into the ring with a fighter who was 49-0 as a pro and considered by many to be among the finest pound for pound fighters in the long and storied history of pugilism.

Naturally, with such an odd scenario in play, the opening odds were ridiculously lopsided. The opening line at Bovada listed Mayweather as the overwhelming -2250 favorite - meaning you'd be required to wager $2250 on Mayweather in order to win $100 - while the odds on a McGregor victory opened at +950. So if you bet $100 on McGregor and he won the fight, you'd stand to garner a $950 profit.

The fight had barely been officially announced when the wagers began to pour in on McGregor. Mayweather quickly dropped to -800, while McGregor was down to +500. Nothing could seem to stem the betting love for the Irish mixed martial artist. By the morning of the fight, Mayweather's odds had plummeted to -400, and McGregor sat at +300. By midday, Mayweather was down to -375 and McGregor stood at +285. When the fighters entered the squared circle, Mayweather's final odds were -350 and McGregor's were +265.

Once the fight began, it rapidly became evident that this was the mismatch that was originally predicted. McGregor had little to no chance against Mayweather, and what few punches he landed had no sting behind them and did no damage. Mayweather toyed with his opponent before finally delivering a 10th round technical knockout victory. All that money wagered on McGregor were simply bad bets, but the sportsbooks coludn't take that chance. They needed to move the line significantly or risk being wiped out financially.

It's Supply And Demand

Line moving is simply Economics 101. The sportsbooks aren't looking to create a line that gives both sides of a bet an equal chance at winning, they are looking to create lines that give them an equal chance of making a profit. If the Cleveland Cavaliers are 5.5-point favorites to to defeat the Milwaukee Bucks, with -110 the line, if the sportsbook can get $110,000 wagered on each of them, they stand to earn a $10,000 profit on the game no matter which team wins.

If moving the line doesn't balance the betting books for the sportsbook, they can also adjust the odds on the line. Perhaps they drop the Cavaliers to even money and increase the Bucks to -120. It's just another way of enocuraging money to be wagered on both sides of the equation, which is always the endgame of moving the line.