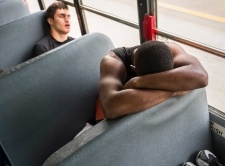 Are you tired of waking up tired? Well, imagine if you were a professional athlete in the midst of a long road trip, waking up in a different hotel bed every morning, facing that momentary uncertain of trying to remember which city it is that they currently reside? And that's just the emotional impact of the long grind of life on the road. The physical toll can prove to be just as taxing both on a player's psyche and their well-being, and these aspects should never be discounted when considering a wager.

Betting And The Wear And Tear Of Sports

Travel is one of the unavoidable negatives of playing pro sports. The amount of travel and the burden it puts on players varies from sport to sport, but each element is something that you should always take into account when placing a wager on an upcoming game. Is one team in the midst of a long road trip? Are they playing outside of their normal time zone? Is it a long trip traversing over several time zones? Factor all of these examples into your decison before you lay that wager.

There was a time when travel wasn't that much of an issue. In earlier eras, for the most part, pro teams resided in the Eastern time zone and there were far fewer games and travel was much less arduous. That certainly isn't the case today, and one of the most important aspects of setting up a team's season is in how they lay out their schedule.

The Long Grind: Travel In The NBA And NHL

No North American sports teams find themselves away from home so often and in such an arduous manner as do the players who ply their trade in the NHL and NBA. Back-to-back games, three games in four nights, six, seven and occasionally even 10-game road trips are not uncommon occurrences. This is a fact of life for those players, and is most definitely an element you must factor into play when wagering on games in either league.

Is one team nearing the end of a long road trip? Are they struggling on the journey, or enjoying success? Has sickness infected the team during the grind of their sojourn? In the case of hockey, it's not uncommon in the second game of back-to-back road games for the visiting team to deploy its back-up goaltender, another element your should factor into your wagering decisions. Basketball teams will likely be forced to utilize their bench more during long road swings, so keep in mind the quality of a team's depth when you wager.

Another aspect to ponder is whether one team is in a stretch of many games in a few nights, while the other club is well rested? Or perhaps one team is sitting in a city awaiting the arrival of the other team coming in from a game the night before. And it isn't always the home team enjoying this scenario. Plenty of teams on road trips get to their next stop early while the home team is still playing a road game the night prior to when they are scheduled to meet.

An NHL coach who'd been in charge of teams that played in both the Pacific and Eastern time zones during his career once explained how it was easier for a Western team to go East than it was for an Eastern team to go West. His theory was that if a team was playing a 7 p.m. game, in the case of a West Coast team - say the Los Angeles Kings were in New York to play the Rangers - well that would be like playing at 4 p.m. back home. No different than an afternoon game for them.

On the other hand, suppose the Boston Bruins are in Anaheim to play the Ducks and it's a 7 p.m. start local time. Back home in Boston, where their body clock normally ticks, that's 10 p.m. and it's getting close to bed time. Instead, these players are being asked to gear up and get their bodies ready for the ultimate physical test, 60 minutes of NHL hockey. The coach's theory was that this just wasn't natural, and it only made sense that the longer the game went on, the more the advantage swung to the West Coast club.

A trend that is evident in sports is another one your should consider in regards to travel. Often, when teams come home from long road trips, they don't perform as well as they usually would in familiar surroundings. Perhaps they relax and breathe a sigh of relief to finally be home, or maybe they just don't maintain that normal sharp focus that comes from being at home. Whatever the case, when a team comes home for that first game following a road trip, that's a good time to make a wager on a road underdog.

Major League Baseball teams also spend plenty of time away from home with 81 road games in the schedule each season, but it's a different formula than what NHL and NBA teams face. Since for the most part baseball teams play three and four-game series, they get to situate themselves in one city and can grow accustomed to their surroundings. Still, there are games that travel will impact. One such example is getaway day, when teams are packing to move on to their next series.

If one team is on the move, their mind could already be elsewhere. But if both teams are about to hit the road, the home team's advantage may not be as strong as normal.

You would think that football would be a sport where travel would make the least impact, but that isn't the case at all. There are NCAA teams that have gone decades without winning in certain road stadiums within their conference. As well, there are NFL teams that simply can't find success when they trek cross country and out of their time zone. Knowing these ongoing trends is vital if you want to be a winner when betting on the gridiron.

There is one time of year when you can throw the whole issue of road weariness and team fatigue out the window, and that's during the postseason. In a seven-game series, the travel is identical for both teams, since they are traveling back and forth between the two cities, so neither team gains an advantage. Except in one instance - Game 7. Traditionally, the home team holds a significant edge in successful outcomes during Game 7 of a playoff series. It's why teams strive to earn that home advantage, to play Game 7 in their own building.