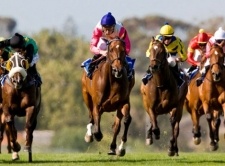 One of the big changes in handicapping tools and information over the past couple decades is the wide-spread availability of video of past races on Youtube and other video media platforms. While reading past performance information and the official charts of races give a lot of clues as to how a specific horse ran in a race, nothing beats a visual to get a clear idea how a particular race was run.

How Trip Trouble Can Effect a Horse Race

One of the most useful ways to use video is to find horses that had "trip trouble" in a race that caused them to end up in the back of the pack at the finish line, when otherwise they may have had a good shot at getting in the money or even winning the race. A poor result in these cases can sometimes lead to a horse being a very live longshot in their next race, with the chance of a big payoff if they get a better trip.

A good example of this goes back to the 2016 Triple Crown series, and concerns a colt called Creator, who finished 13th in that year's Kentucky Derby, but came back five weeks later to win the Belmont Stakes. Looking at the video below, Creator breaks from the #3 post, the gray horse with white blinkers and white silks. He's a notoriously slow starter, and quickly falls to the back of the pack. He's easy to pick up as they move down the backstretch, sitting third from last and then fourth last starting to skim up the rail as they approach the far turn.

Into the turn he's steadily moving up, but when jockey Ricardo Santana moves him off the rail as they come off the turn, things start to get hairy. He immediately finds himself up against not one, but two horses to his outside. As he tries to find a way through, he runs right up on the heels of three more horses right in front of him.

Given a clear path, he had the momentum to get past all of these horses, but instead he has to pull up hard, losing all chance of getting a clear run on the leaders through the stretch. Whether Santana made the mistake of trying to find a hole through were none existed or not is irrelevant.

The fact is Creator was never able to get into a position to use his best ability, that being his strong closing kick. In large part due to this result, Creator (after skipping the Preakness Stakes) went off as a better than 16-1 after thought in the 2016 Belmont Stakes. The savvy handicapper who recognized the consequences of Creator's poor trip in the Derby and decided to give him another chance - and hope for a better trip in the less-crowded Belmont field - was rewarded with a $34.80 Win payout when he came flying late to win the Belmont by a nose.

Another, similar example of a horse that would likely have had a better result without trip trouble that then goes on to win its next start concerns the filly Wonder Gadot, who finished sixth in the 2017 Breeders' Cup Juvenile Fillies.

In this one, Wonder Gadot breaks from the #11 post, and like Creator, runs near the back of the pack early, but unlike Creator she starts to pick off horses on the backstretch, with the eventual race winner, Caledonia Road to her outside. While that one is able to make a big sweeping move on the turn as they set down for the run toward home, Wonder Gadot starts to encounter traffic, being pressed from both sides.

Still, she appears to have lots of forward momentum, and if she's not going  to catch Caledonia Road for the win, the place or show money is definitely in reach. Instead, less than 1/8 of a mile from the finish, she runs right up behind a tiring Seperationofpowers, and has to check hard. Seperationofpowers goes on to finish fourth, while Wonder Gadot, who obviously would have passed her, and perhaps one or two others if not having to all but stop in her tracks, ends up sixth.

Looking simply at results, Wonder Gadot had previously been winning at her homebase at Woodbine, and her finish out of the money in the BC Juvenile Fillies at first glance would indicate that up against tougher US-based runners, she couldn't compete.

But if you watch the video, you know that her chances were compromised by the traffic trouble she had in deep stretch. In her next start, the Grade 2 Demoiselle Stakes at Belmont Park, she broke much better from the gate, had a clear run on the leaders at the top of the stretch, and won going away. All of this points to the value of watching race video as a handicapping tool.

If you're looking at the past performance information for a certain horse, note the comments for the race, and if the horse in its previous start was said to be "in tight", encounters "traffic" or especially is "checked" at any point in the race, try to find video of that race and determine how much the traffic trouble had an impact on the final result.

You very well might find a horse that just needs a clean trip to pull off a win at big odds.