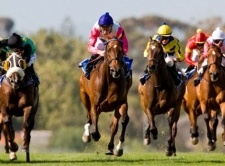 The old saying in baseball is that "you can't tell the players without a scorecard". As it applies to horse racing, it could be said that you can't handicap the horses without understanding past performance and handicapping terms. One of the most difficult things for people new to horse betting is simply understanding all the information presented in the PPs as well as by racing analysts and race track commentators. In an effort to help you be a better horse bettor, here we'll define some of the most essential terms in horse handicapping.

Obviously, not all horses are the same. Knowing what type of horses are running in a race is a big factor in handicapping the race and figuring out which horses are most likely to win.

Juveniles - Most horses begin racing at age two, and these are referred to as Juveniles. Juvenile horses only race against other juveniles, at distances up to 1 1/16 miles.

Older Horses - This refers to horses aged four and older. You'll often hear commentators mention a three-year-old horse is "facing older horses for the first time". They are often considered to have an edge based on physical development and experience.

Speed Horses - Horses that typically get out of the gate quickly and race to the lead to set the pace or run close to the pacesetter. You'll hear that a horse has "lots of early speed", and if there are more than one of these horses in a race, you can usually expect a fast pace in the first part of the race.

Stayers/Distance Horses - Horses that run their best at distances of 1 1/8 miles or more. You might hear someone say a certain horse can "stay the distance", "stay the course", or that it "stays on very well".

Closers - Horses that typically race near the back of the pack, and then make one big run late in the race. Theoretically, the faster the early pace, the more chance a closer has to win the race, passing the pacesetters as they get tired.

Shippers - When a horse is brought from another track or state to run in a particular race, it's said to have been "shipped in" for the race. If an owner goes to the expense to "ship" a horse, he must have a good feeling the horse can win the race.

Dirt/Turf Horses - Most horses run better on one surface or the other, and generally will only race on that surface during their career. Turf is also referred to as "grass".

Maiden - A horse that has not yet won a race. When a horse does win its first race, it's said to have "broke its maiden".

There are several versions of past performance information available from companies such as the Daily Racing Form or Brisnet, but they all basically contain the same or very similar information. The PPs, as they are called, are the guide to handicapping horse races.

Here's a breakdown of the basic information.

Jockey Info - The PP will indicate the name of the jockey riding the horse that day, and his/her record, both overall for the year and at that track's current racing meet.

Racing Record - The top right-hand corner of the PP gives the horse's overall racing record, broken down by current year, previous year, and lifetime. It indicates the horse's record at that particular track, and over dirt, turf and wet surfaces, as well as in distance races.

Date, Track and Race Information - The first section in the PP gives the dates the horse has previously raced, the name of the track, the track condition (ie; fast, firm, sloppy), the distance of the race, and if the race was run on the turf.

Type of Race - Following the time information, the PP gives the "conditions" of the race, including age of the horses running (ie; a 3 with an up arrow indicates the race was open to horses age three and older) and whether it was a claiming race, allowance or stake, and the claiming price or purse money.

Race Line - The next section of information gives the position of the horse when it immediately breaks from the gate, and its positon at each timed segment of the race. It indicates how far ahead it is (by lengths) if leading the race, or its postion and how far behind the leader.

Jockey, Weight and Odds - The next section of the PP line gives the name of the jockey that rode the horse, the weight the horse carried, and its final odds. An asterisk next to the odds indicates it was the race favorite.

Commentary - After the top three, there is a brief commentary on how the horse ran in that race. This is followed by a number indicating how many horses ran in the race.

Again, this is just a basic look at the Past Performance information, and leaves out a few things such as speed ratings, medications and equipment, and workout times. On other pages here on Be A Bettor Better we'll take a more in-depth look at different aspects of using the PPs to handicap races, and include all of this type of information.

For handicapping purposes, it's important to understand the different levels of racing (or class), so you know if a horse is facing tougher or easier competition than it has been running against in previous races. Horses either stepping up or dropping down in class is a key handicapping angle.

Claiming Races - Horses that are entered in these races can be "claimed" by another trainer for a set price. Claiming prices vary from race-to-race and track-to-track, depending on the quality of the horses in the race. These are the most common types of races in North America.

Allowance Races - One step above claiming races, the name comes from the fact horses in the race are "allowed" to carry less weight depending on certain conditions. You'll often see something like "non-winners of two races allowed 2 lbs." meaning those horses carry 2 lbs. less than the standard race weight.

Stakes Races - The highest level of racing, so named because the owners will put up a "stake" to enter the race which then forms part of the total purse. There are several types of stakes races.

Restricted Stakes - Races that place certain "restrictions" on what kinds of horses can enter. The most common restrictions are stakes only open to female horses, and stakes restricted to horses bred in the state where the race is located.

Graded Stakes - These are the highest level of races in North America (in Europe they are called Group races) and are divided into Grade 1, 2 or 3, with 1 being the highest. They are typically designated by the (G1) symbol. Grades are assigned to races by a national grading committee, and each grade level must offer a minimum purse amount. As of 2018 this is $100,000 for Grade 3, $200,000 for Grade 2, and $300,000 for Grade 1.

Handicap Races - These are stakes races where certain horses are given a "handicap" of having to carry more weight based on certain factors, such as whether they have won stakes races in the past. Handicaps can also be graded stakes.