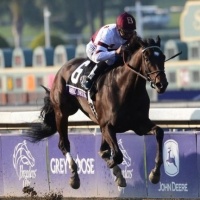 The Breeders' Cup Distaff, also known for a time as the Ladies' Classic, is the feature race of the Breeders' Cup World Championship for female horses aged three and older. Originally, the race was run at the "classic" distance of 1 1/4 miles, but since 1988 has been run at 1 1/8 miles on the dirt track, and offers a purse of $2 million. Since the Breeders' Cup expanded to a Friday-Saturday event in 2007, the Distaff has historically been run as the closing race of the first day. In 2018, the Distaff will be run on November 2.

If you can't get to the track to wager on your Breeders' Cup Distaff picks, you can always make your bets and enjoy great bonusus and rebates on your PC or mobile device with any of these top-rated online racebooks.

Over the past few years, the older female division of North American thoroughbreds has been dominated by a handful of horses, and this is an important factor to keep in mind when analyzing previous Breeders' Cup Distaff results. Typically, the race will attract two or three closely matched strong contenders, and historically the favorites for the Distaff tend to win the race, perhaps more so than any other Breeders' Cup race.

Looking back over the past 10 years of the BC Distaff, we find the average winning odds to be less than 4-1, with the favorite winning four of those races. No winner has had double-digit odds. In fact, the favorite has won the Distaff in 14 of the 32 runnings of the race, and while there have been a couple of big longshot winners - such as 47-1 One Dreamer in 1994, or 56-1 Spain in 2000 - only six times in the history of the race has the winner been in double-digit odds.

The Distaff in 2017 was no exception to this trend, as winner Forever Unbridled went off at odds just under 4-1. The top four finishers were at 5-1 or less, with 2-1 favorite Elate running fourth.

Due to the fact there are often a couple of dominant mares in the race, the Distaff tends to attract smaller fields than many of the other Breeders' Cup races - there were only eight starters in 2016, with three of those being under 3-1, and only six starters in 2013, again with three of those under 3-1. Once again, the 2017 race followed a similar trend, as there were only eight mares in the field, with five of those in single-digit odds of 5-1 or below.

How To Bet On The Distaff

So how to bet the Distaff and try to get a decent return on your wagering dollar? The Distaff is clearly a race that cries out for exotic bets. Keying one or even two of the top favorites on top of trifectas has produced fairly good payouts over the past few years, even when the favorites finish on top, with payouts in the $150-$200 range on $2 trfiectas being quite common. Despite the relatively low odds on the top three finishers in 2017, the $2 trifecta paid out $294.40.

Another way the Distaff can prove valuable is using the race in Pick 3s or Pick 4s. When trying to manage a betting bankroll, you're able to cover more horses in the races proceeding the Distaff when you can key on one or two of the top contenders in the Distaff, knowing that the race historically is won by those types of horses.

Another betting angle for the Distaff, much like the Breeders' Cup Turf, is that the top horses tend to run the race more than once, and typically produce good results. Beholder, for example, won the race in 2013, and then again three years later, while Royal Delta won consecutive races in 2011 and 2012. Music Note finished third twice in a row, in 2008-'09, as did Heritage Gold in 1999-'00. Banshee Breeze, Heavenly Prize and Versailles Treaty were all two-time runners-up in consecutive runnings of the Distaff, Bayakoa won the race twice in a row, and Life's Magic and Lady's Secret both finished second in the race one year before winning it the next.

Forever Unbridled was third in 2016, before coming back to take the win this last year.

What this indicates for handicapping is that horses that have produced good results in the Distaff one year should be given serious consideration the next time they run in the race, and if they happen to be at high odds should definitely be included on any exotic wagering tickets.