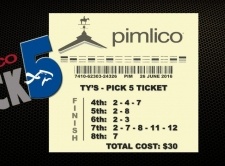 Multiple-race wagers - often called horizontal wagers - are essentially Win bets spread over three to six successive races. These have become very popular bets for horseplayers over the past few years and so here we'll go in depth on handicapping multiple-race wagers to bet at your preferred online racebook.

The single most important aspect of betting multiple-race wagers is to do all of your handicapping homework before the races begin.

It may seem obvious, but if you're going to be betting the winner on three, four or more successive races, you should have a pretty good idea of the horses you like in each race well before post time.

As many tracks offer rolling Pick3s you don't need to handicap every race, but you should handicap beforehand which of the three races you want to bet, so you're making informed decisons and not just rushing to get your bets in at the last minute.

For years, most race tracks in North America have offered a Daily Double, usually on the first two races of the day, and then they added a late Daily Double on the last two races of the day. Mutilple race wagers have simply expanded on this idea, with Pick3s, Pick4s, Pick5s and Pick6s, with the last of these two usually rolling over to the next day's racing if they are not won.

These bets, particularly the Pick5s and Pick6s, can accumulate huge carry-over betting pools, into the hundreds of thousands of dollars, which is one of the reasons they have become so popular.

Calculating The Cost Of A Bet

It is entirely possible, when betting a $2 Pick3, for example, to simply pick one horse to win in each of the three races and leave it at that, meaning the bet will cost $2. It's possible, but not really a very effective betting strategy. Even if you simply bet the three favorites in each race and the favorites win, the payout will be fairly low because everyone will be including the favorites on their tickets.

The goal with betting mutiple race wagers is to find at least a couple higher-priced contenders or even big long shots to include on the ticket to increase the chance of a big payout for getting it right. This means that you have to use multiple horses in at least a couple of the races and every horse you add to the ticket increases the cost.

In order to manage your bankroll, you need to know how much the ticket will cost when putting together the bet. Sticking with a basic $2 Pick 3, if you wanted to bet two horses in the first race, two horses in the second race, and two horses in the third race, the calculation would be: 2 x 2 x 2 = 8, and then 8 x $2 = $16.

The same formula is used to calculate Pick5s and Pick6s. As you can see, the cost of these bets can get pretty expensive and the race tracks have recognized this fact by offering 60 cent, 20 cent and even 10 cent Pick 5s and Pick6s.

Even though you will be making a single bet on multiple races instead of just one race, all the normal rules of good handicapping still apply.

Once you have followed these handicapping guidelines for making multiple-race wagers, you're ready to place your bets at one of these top-rated online racebooks.