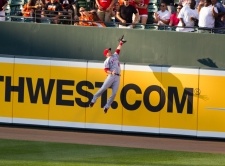 The rivalries that develop between baseball teams fuels passion among both the players and the fans of the sport. The narrative that develops between a pair of rivals can run its course over a single season or stretch out to last for over a century. One of the finest rivalries in the MLB is between the San Francisco Giants and the Los Angeles Dodgers, which actually began when both of the teams were situated in New York. There are a couple of different revenge betting systems that bettors look to when seeking profitable wagering opportunities, including the quick revenge system and the long-term revenge system.

Baseball's quick revenge system focuses on teams that have been defeated by three or more runs by a visiting team. If the home team is the favorite for the next game, players wager that the team will be more motivated to win, thus achieving vengeance. The reason that favorites are played in the quick revenge system is due to the fact that underdogs may not have enough skill to carry out a revenge win.

Baseball's long-term revenge system deals with teams that have been swept in a previous series with the idea that they will do whatever it takes to avoid being swept again. As such, this system stipulates that the swept team will win at least one game in the next series to avoid the embarrassment of being swept again. Some people place increasing wagers when using this system, covering a loss by betting big that a team will win at least once in the series. Others utilize this system by placing moneyline bets on favorites and run line wagers on the underdogs.

Both of these systems rely on the motivational boost that players should receive as professional competitors when they lose in an embarrassing fashion. That extra bit of focus and energy that players feel in the quest for revenge can often be the difference between losing and winning.

This system is best used as a tool that adds context to an individual wager, rather than a system that involves automatically placing wagers on teams that fit the conditions of the wagering rules. If you're sitting on the fence when making a decision to place a wager on an MLB team, knowing that a team has a bit more motivation to win due to revenge can help guide you to making a logical betting choice.

By nature, sports are an unpredictable entertainment product, which means that you should never believe that a sports betting system will guarantee success. If a player becomes injured or some other unknown factor influences the end results, the odds and the percentages may become skewed. Any time you place a bet, always perform due diligence before placing a final wager.