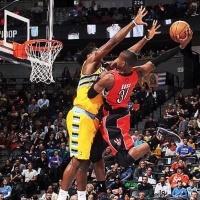 There are a vast array of NBA fantasy games that can be played, but each of them follows similar principles. The objective is to create your own team of NBA stars and then accumulate points for your team based upon their real-life performances on the hardwood.

To succeed at NBA fantasy basketball, you will have your work cut out for you but that’s why you got into the league and the sport in the first place, because you love basketball. Let that passion continue to drive you, but as is the case with an actual NBA GM, if success is your goal, make decisions with your head and not your heart.

Pay attention to trends, keep tabs on who is hot, and know which of your players are situated to help you win, and which are in tough, say in the midst of a long road trip or nursing an injury. Most of all, remember to enjoy yourself and have fun. It’s fantasy basketball, after all. It isn’t reality.

In a rotisserie or roto league, the most common form of fantasy basketball, you compete in a number of statistical categories with other teams. Some of the categories generally utilized are points, rebounds, assists, blocks, and steals.

In a 10-team league, for instance, the team whose players accumulate the most rebounds would be awarded 10 points, down to one point for the last-place team in this category.

This format is followed in every category and all of the points are tabulated to determine the overall winner of the league.

Head to head NBA fantasy leagues operate in similar fashion to an NFL fantasy format. Teams are drafted and starting lineups are selected, generally consisting of a center, two forwards, two guards and a sixth man. Your team is matched up against another from the league each week, with games usually running from Monday through Sunday.

Your team’s totals are matched up against those of your opponent and the team that comes out ahead in a majority of the categories used – usually field goal percentage, free throw percentage, points, rebounds, assists, blocks, three pointers, steals and turnovers – wins the game.

Most leagues tend to go with a five-category format, with a balance among offensive and defensive statistical categories, though some are more complicated and there are even leagues that establish a salary cap that your roster may not exceed.

The simplest and easiest to follow of the different types of NBA fantasy games, points-based leagues assign a numeric value to each of the statistical categories designated to detemine each team’s score. At the end of the game, the scores are tabulated and the team with the most overall points is the winner.

The advantage to this style of fantasy basketball is that you aren’t severely punished if your team is weak at, say, rebounding or three-point shooting, because you can make up for those lost points by excelling in other areas of the game.

Newcomers to fantasy basketball tend to prefer this format since it is less complicated than the other games.