Bolster by the offseason acquisition of former Cy Young award winner Max Scherzer, Washington is the preseason favorite to win the Fall Classic. Knocking on the door for a couple of years now, the Nationals may finally be ready to just kick it in at this point. Playing in the very weak National League East will certainly help the Nats playoff chances as well. Do they have enough to get past the Dodgers?

As one of the bigger movers and shakers over the winter, Los Angeles looks to improve on their 94 wins from last season. The Dodgers have made several key moves to get younger and we see them as being an even more complete ball team this season. With Clayton Kershaw and Zach Greinke trotting out to bump for two of every five games, they will be backed by a solid if not spectacular supporting cast, the Dodgers will once again have one of the best pitching rotations in the Majors.

MLB World Series Futures Prediction: Still slightly stinging, due to the Dodgers collapse in the 2014 MLB playoffs, we are going to get back on the Big Blue horse. We are backing Los Angels with a 200 unit wager on their World Series futures line posted on the betting board at the TopBet sportsbook. Surf over to TopBet for the best MLB Championship futures prices – before the regular season opens. 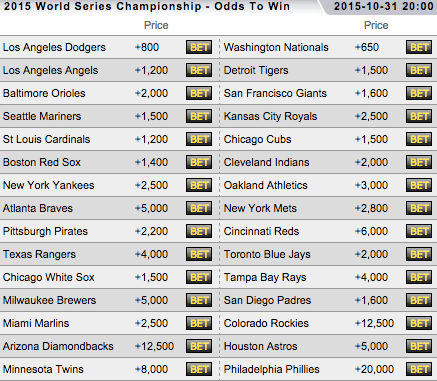