Betting lines brought to you by Topbet.

The 2017 Wimbledon men’s Singles competition could be one of the most-exciting on record thanks to Andy Murray looking to defend his title, Roger Federer looking back to his best following a knee injury and Rafael Nadal climbing to number two in the world on the back of two titles from his previous three tournaments. Here are my two men to watch at Wimbledon 2017. 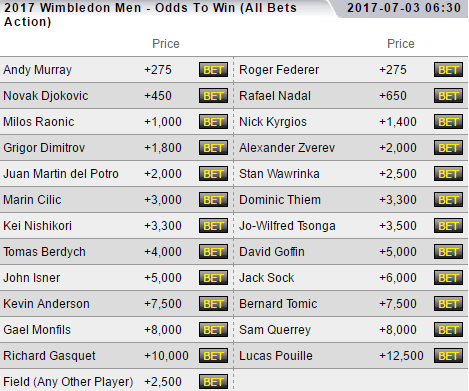 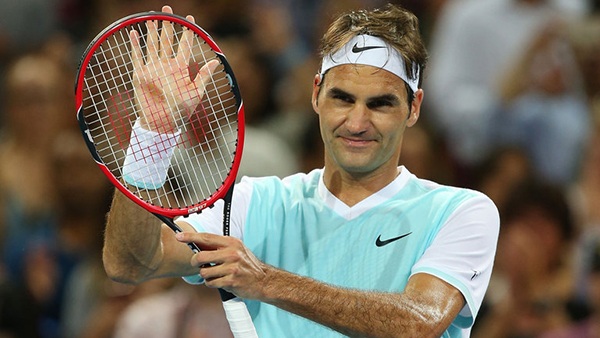 Federer, currently ranked fifth in the world, didn’t play at the recent Roland Garros tournament in order to ensure he was fully rested for Wimbledon. The soon-to-bet 36-year-old already has seven Wimbledon titles to so it would take a brave bettor to wager against him securing his eighth winner’s trophy.

Like Murray, Federer is a solid player on grass, as proved by his domination of Wimbledon in recent years.

Federer has only dropped one set in his previous 12 matches and won back-to-back titles at BNP Paribas Open, where he beat Stan Wawrinka in the final. He was then victorious in Miami where he brushed aside Nadal in straight sets.

Miami was the last time Federer played so he has enjoyed a two month break. If he hasn’t lost his sharpness during this downtime, Federer should be the man to beat. 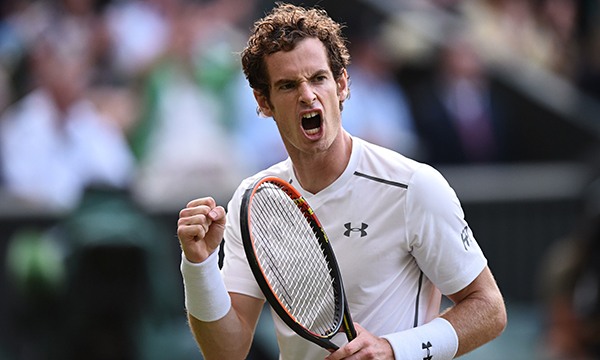 World number one and reigning Wimbledon champion Andy Murray is the +275 join favorite (with Roger Federer) to win the 2017 Wimbledon Men’s Singles. Unless Murray meets one of the so-called “big three” before the final, I would fully expect the Scotsman to reach the final of this year’s competition.

Murray has struggled for form this year and has a 21-8 record in 2017 and a 10-5 record in Europe. Murray fell in the Round of Eight in Madrid then in the Round of 16 in the Internazionali BNL D’Italia before losing in five sets to Stan Wawrinka in the Roland Garros semi-finals.

Despite his relatively poor form, Murray will be looking forward to Wimbledon as he excels on a grass court. Murray has only lost three of his previous 42 matches on grass while the majority of his high ranking opponents prefer a hard or clay court.

The women’s single has been dominated by Serena Williams for the best part of a decade but, as she's with child, will not be competing at 2017 Wimbledon. Williams’ absence means the betting is wide open this year.

Could an underdog take the title? 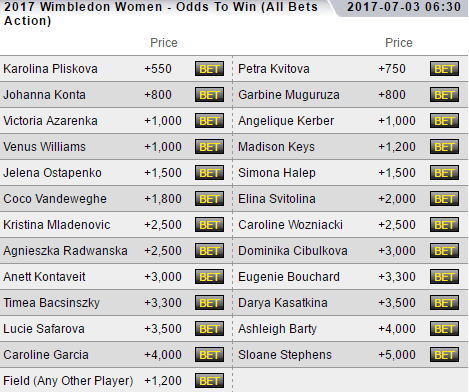 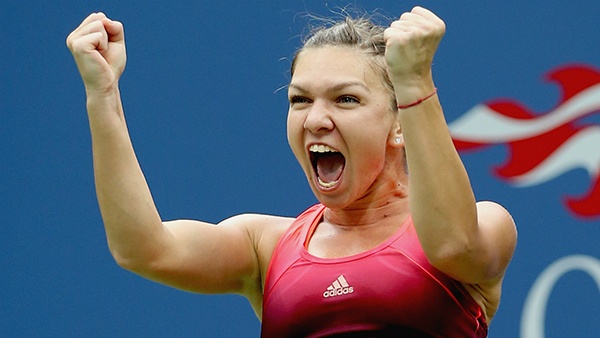 Romania’s Simona Halep has only progressed past the second round of Wimbledon twice, reaching the semi-finals in 2014 and the quarter-finals in 2016 yet I believe she could triumph in this year’s women’s single competiton.

Halep is in superb form having won the Mutua Madrid Open, was the losing finalist in the Internazionali BNL D’Italia and also lost in the final of Roland Garros, all in May.

It was Halep’s Roland Garros loss that was the most impressive result as she beat world number five Elina Svitolina and world number three Karolina Pliskova on her way to the final, including beating Svitolina 6-0 on the third and final set of their quarter-final match.

She’ll need a lucky draw if she is to win her first Wimbledon title, but Halep has the ability to beat anyone on her day, and at +1500 on TopBet, she looks a shrewd bet. 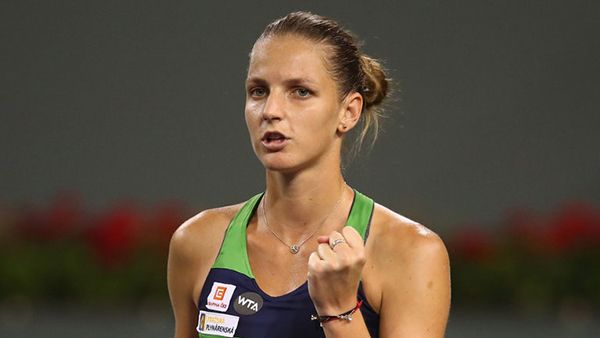 Karolina Pliskova has a poor record at Wimbledon having never progressed further than Round 2. She is also still waiting for her first Grand Slam title, but the wait could soon be over for the Czech star.

Pliskova is ranked third in the world, her highest-ever ranking, and will be brimming with confidence. A disappointing Round of 16 exit in Madrid was followed up by a more impressive quarter-final appearance in Italy (she lost to Elina Svitolina) and a semi-final appearance at Rolland Garros (lost to Simona Halep in three sets).

The women’s single tournament is wide open this year and Pliskova has the attitude to take full advantage. If she doesn’t emerge victorious, Pliskova will have a major say in who does win 2017 Wimbledon.