Will The Home Team Continue to Roll Out The Welcome Mat?

Home Sweet Home? Not In These Sets

After winning two games in Anaheim, Edmonton did a pratfall on home ice in Game 3. Pittsburgh did likewise in Game 3 against Washington Can the home teams regroup? We've got all the answers for you, with odds provided courtesy of Bovada.lv and TopBet.eu:

The lack of success by the home teams in this series is reflected in the odds provided by Bovada on the visiting Ducks. It's rare that you will see a visiting club rated as an even pick, especially in the Stanley Cup playoffs, although this is not unfamiliar territory for Anaheim.

The good news for Oilers backers is that Anaheim lost both of those series in seven games. After the 6-3 shellacking they absorbed at the Rogers Centre in Game 3, the Oilers need to regroup and they also need a better effort from their checking line.

Both Milan Lucic and Jordan Eberle of that unit were minus-three in Game 3 and Oilers coach Todd McLellan called out Eberle after the loss, saying he needed more from one of the team's supposed leaders. Lucic, a Stanley Cup winner with Boston in 2010-11, is another Oiler who has been playing poorly in his own end of the rink.

Smacked 7-0 in Game 4 of their opening round series with the San Jose Sharks, the Oilers rebounded to win the next two games and take the series. They've proven a resilient bunch so far and have yet to lose back-to-back games in the playoffs.

The Ducks got offense from expected sources, with a goal and an assist by captain Ryan Getzlaf, who leads the Ducks with 5-4-9 totals, and from less likely sources. Forward Jakob Silfverberg scored twice, giving him a team-leading six goals, and Shea Theodore collected two assists. He leads all rookie defensemen and is second among rookie scorers with 2-5-7 numbers.

The oddsmakers aren't ready to give up on the Oilers yet. Bovada still lists Edmonton as the -225 favorites to win this series. The Ducks are a +185 choice to take the set and advance to the Western Conference final for the second time in three years. 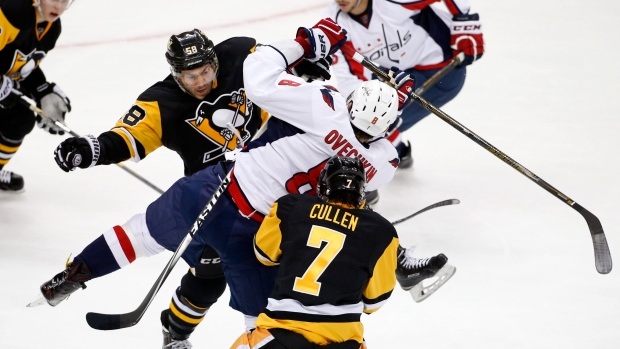 Penguins captain Sidney Crosby has been ruled out of Game 4 with a concussion. He left Game 3 after taking a cross-check to the head from Washington defenseman Matt Niskanen, his former Pittsburgh teammate. Crosby has a history of concussions - he missed the first six games of this season due to a concussion - so this is an alarming development for Penguins backers. Niskanen was assessed a five-minute major for his illegal stickwork but will face no further discipline for his action.

Following a 6-3 drubbing on home ice to fall behind 2-0 in the series, the Capitals rebounded to win and got goals from Evgeny Kuznetsov and Kevin Shattenkirk, two players who'd been missing in action during the first two games. Goalie Braden Holtby also responded after getting the hook in Game 2.

Minus Crosby, anticipate another low-scoring affair, so you'll want to play the under at +120.