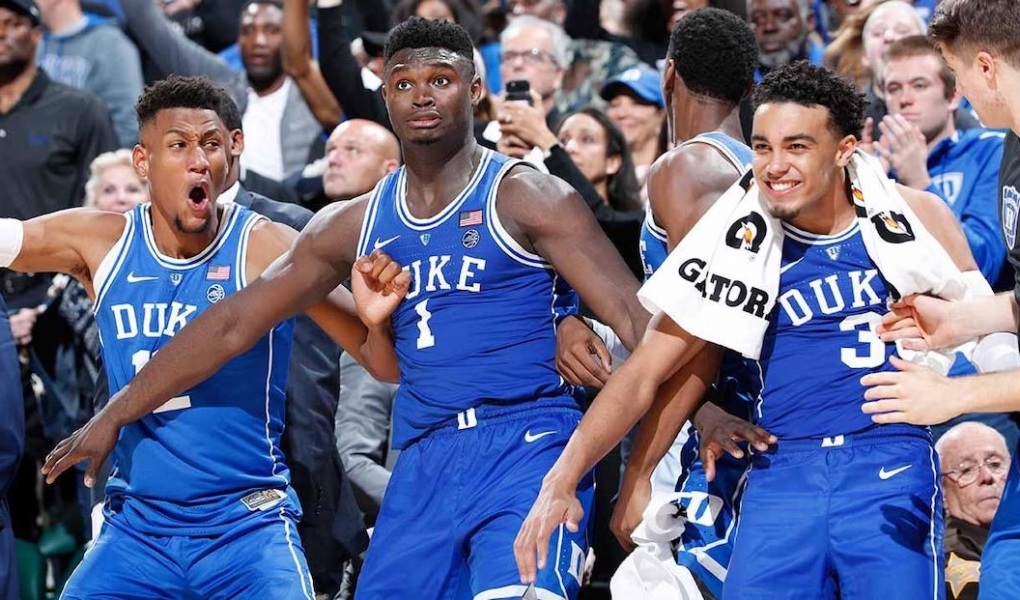 Picking the best candidates to win college basketball’s National Championship is among the hardest wagers bettors must make. Constantly changing rosters give way to wild shifts in the pecking order, and whenever there’s youthful talent involved, you must always account for a level of unexpected variance.

To keep you in the know for this year’s championship-hunting crop, we’re going over everything you need to know about the big picture. Our breakdown includes:

Please note that all our odds in this article come via Bovada and are accurate as of Thursday, Nov. 8. Make sure you’re confirming these lines with your preferred sportsbooks, as they will wax and wane—particularly in the early going.

Here are the five teams with the best shot at finishing the year as national champs, according to oddsmakers.

Raise your hand if you’re surprised. No takers? Didn’t think so.

Duke is absolutely stacked this year. Their three top guys—Zion Williamson, Cam Reddish and R.J. Barrett—all have a shot at going in the top five of next year’s NBA draft. Their fourth-best player, Tre Jones, brother of Minnesota Timberwolves point guard Tyus Jones, is also believed to have NBA chops.

There are only three certainties in life: Death, taxes and the Kentucky Wildcats beginning every regular season with top-five championship odds.

Head coach John Calipari has put together more impressive products in the past, but with scorers like Keldon Johnson and Reid Travis, this team figures to be in the thick of contention deep into March Madness.

This year’s Nevada Wolf Pack squad has a Villanova-like feel to them. Head coach Eric Musselman is bringing back three All-Conference talents, which gives this team a serious leg-up in the depth department.

Remember: While scouts and fans are often enthralled by one-and-done prospects, it’s often the teams who get continuity from upperclassmen-stacked units that prevail on the biggest stage.

A lot of people will disagree with the Gonzaga Bulldogs laying less favorable odds than Nevada. They have a point. They, too, bring back a lot of experienced players.

Unsteady point guard play figures to hurt them as they get closer to the March Madness tournament, but if Josh Perkins plays with a semblance of consistency during the regular season, the Bulldogs will remain a formidable title threat.

Some have entertained the Kansas Jayhawks as the second-best team in college basketball. That might be a bit of a reach. But also, maybe not.

As noted ad nauseam, the Jayhawks have a trio of players who can man the point guard position, giving them almost-unrivaled playmaking versatility. Time will tell how much that matters. Their schedule to start the year verges on brutal. If they drop too many tilts against potential top-25 teams early on, their championship stock will fall.

If you’re looking for a high-risk, high-reward National Championship wager, these teams are going to be your best bet.

The Loyola Ramblers made the Final Four last year, which basically should have guaranteed them better odds than this. Though they lost a few key players, they’re returning Marques Towns and Clayton Custer.

Don’t sleep too hard on them.

Working off an 18-win effort last year, the Illinois State Redbirds are returning many of their top scorers and boast a brand-spanking-new offense to boot. They seem like a lock to waltz past the 22-victory marker, which sets them up nicely in the ultra-brutal Missouri Valley Conference—the same conference that includes the ramblers from above.

The Oregon Ducks don’t face much resistance in the Pac-12 conference this year. They’re very clearly the team to beat. It helps, too, that they boast one of the best frontcourt rotations in college basketball—a fantastic blend of size, mobility and general athleticism.

Look, this isn’t another one of those cliche best-odds picks. Duke appears legitimately terrifying. They absolutely eviscerated Kentucky, widely considered the second-best team in the country, on opening night.

One-game samples aren’t everything, but Duke’s Big Three of Zion Williamson, Cam Reddish and R.J. Barret are the real deal. Not only do they all have superstar potential, they are all on record as saying they want these Blue Devils to be the best college basketball team in history.

That ego-less approach should not be taken for granted. Star power often breeds selfishness with the NBA draft right around the corner. Judging by their play and the way they carry themselves, Duke doesn’t have to concern itself with such perils or pratfalls.