There was a time back in the days of Alan Page, Fran Tarkenton, Merlin Olsen and Lawrence McCutcheon when the Minnesota Vikings and Los Angeles Rams were the scourge of the NFC. Between 1973-79, at least one of these teams competed in the NFC Championship Game, including 1974 and 1976, when they faced each other for the conference title.

Things have changed plenty since then. The Rams moved to St. Louis, where they won a Super Bowl, and then back to L.A. The Vkiings, who appeared in four NFC title games between 1973-77 have played in four since, and haven't been to the Super Bowl since Super Bowl XI. And this is a team that played in four of the first 11 Super Bowl games.

Both teams have surprisingly gone back to the future this season, and few but the faithful would have bet on this happening. The Vkings are atop the NFC North at 7-2, despite the fact that they are down to third-string quarterback Case Keenum. The Rams, who haven't enjoyed a winning season since 2003 and have incurred double digits in losses six times since 2005, are also 7-2 and out front in the NFC West.

The clash between these two shocking division leaders heads the NFL Week 11 card that also sees the Pittsburgh Steelers and Tennesee Titans meet in a key AFC match-up, and the Philadelphia Eagles looking to put a dagger through the Dallas Cowboys. 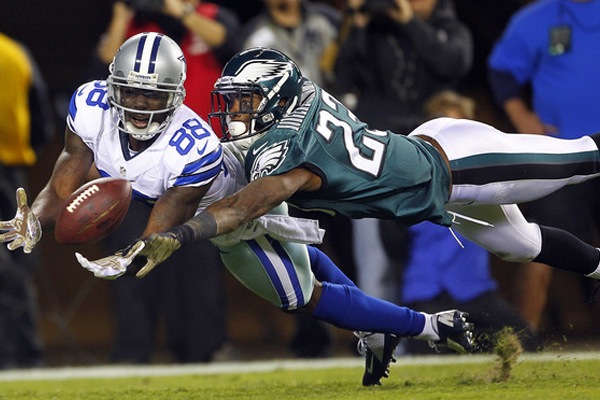 The Carolina Panthers, Indianapolis Colts, New York Jets and San Francisco 49ers enjoy the bye this week. Here are all the Week 11 picks straight up and against the spread. The underlined teams, with their money line odds, are the straight up picks, based on odds provided by Bovada.

Titans Steal Away With One

Tennessee (+250) at Pittsburgh (-300) - Another showdown between division leaders. You see that this one is being played at Heinz Field and are immediately inclined to lean toward the hometown Steelers. Not so fast. The Steelers are just 2-1 at home this season, the loss a 30-9 setback handed them by the Jackonsville Jaguars, co-leaders with the Titans in the AFC South. The favorite in this series has gone 1-6 against the spread in their last seven meetings, and Pittsburgh has gone under in eiight of its last nine games.

Baltimore (-125) at Green Bay (+105) - The nightmare continues for Packers QB Brett Hundley. Green Bay found a way to win against the equally QB-challenged Bears but the Ravens defense will be no picnic. Hundley, in for the injured Aaron Rodgers, is ailing with a hamstring tweak. Aaron Jones (sprained MCL) and Ty Montgomery (ribs), the top two running backs on Green Bay's depth chart, are out. That will force Hundley to the air more against a Baltimore secondary with an NFL-best 13 interceptions.

Detroit (-155) at Chicago (+135) - This is the kind of game the Lions are traditionally known to lose, because they often fail when it seems most implausible. They lost in Chicago last year after all, and the Bears were 3-5 at home. Detroit is on the cusp of the playoff picture and can ill-aford to stub its toe on this one. And the Lions have a QB in Matthew Stafford who can put points on the board. That will be the difference in this one.

Kansas City (-500) at New York Giants (+350) - The Chiefs are a disappointing 1-3 since their impressive 5-0 start but after the bye week, they get well in a hurry against what might just be the NFL's worst team. Yes, the Giants have one more win than the winless Cleveland Browns, but after watching last week's debacle against previously winless San Francisco, it's evident that the team has quit on coach Ben McAdoo and is just playing out the string.

The Saints Keep Marching On

Washington (+300) at New Orleans (-400) - When you see a dome team roll into Buffalo and completely steamroll the Bills, you can't help but be impressed. These Saints are for real. Winners of seven straight, a streak built around their running game and their defense, Redskins QB Kirk Cousins will show the Saints some wrinkles they haven't seen before. Washington has a way of hanging around in games but overall the team is simply too inconsistent to win on the road in New Orleans.

Los Angeles Rams (+110) at Minnesota (-130) - The Rams are the NFL's most prolific offense. The Vikings suit up the NFC's second-stingiest scoring defenses. If we take that showdown as a sawoff, then it comes down to Minnesota's offense versus the Rams' defense. We'll give the Vikings the slight edge there and also note that in the history of this match-up when it's mattered for both teams, the Vikings always win - especially when they play in Minnesota.

Tampa Bay at Miami (no line) - A game that was postponed from Week 1 due to Hurricane Irma, the Dolphins still look as if they are caught in the midst of a storm, dropping two games in the past three weeks by margins of 20 points or more. The Bucs have won four of the last five of these Florida showdowns and covered the spread in all five games. Ryan Fitzpatrick will again start at QB for the Bucs, who are 0-4 on the road this season.

Houston Has A Problem

Arizona at Houston (no line) - Not exactly a marquee match-up at QB, as Tom Savage continues for Houston and third-stringer Blaine Gabbert will likely step to the fore in place of Drew Stanton (knee) for the Cardinals. The Texans have lost three in a row since QB Deshaun Watson was lost for the season. The Cardinals have alternated between loss and win all season long, and this would be their win week. Arizona has scored less than 20 points in three straight. Houston has put up 21 points in its last two games.

Jacksonville (-380) at Cleveland (+290) - For the second year in a row, the 0-9 Browns, who finished 1-15 last season, are the last winless team in the NFL. It's the kind of tradition that no team wants to carry on, yet the Browns simply can't seem to find a way to do otherwise. They gave Detroit a run last week before faltering down the stretch. There's no way they can run with the Jags and their NFL-best defense. Expect another Browns beatdown.

Buffalo at Los Angeles Chargers (no line) - Did the Bills suddenly wake up and realize that they were the Bills? A road loss to the Jets was followed by an absolute embarrassment against the Saints at home, and just like that, a team that looked to be a legitimate contender in the AFC East is 5-4. But in the abysmal AFC, the Bills, who haven't made the playoffs since 1999, cling to the No. 6 seed and the final postseason spot. The Bills are 1-6 in California since 2005.

New England (-290) vs. Oakland (+245) - The Patriots find another place where they can win as they journey to Mexico to face the reeling Raiders. Winners of five in a row, the Patriots are now firmly in command of the AFC East and look to be headed to another AFC Championship Game. At the start of the season, you could have made the case that Tom Brady and Co. might face the Raiders in that game but no longer. Oakland is 2-5 in its last seven and beat up on defense.

Cincinnati (+125) at Denver (-145) - Another one of those somebody has to win this game, right? Even with Brock Osweiler completing passes to people's heads on the sideline, we'll still take the Broncos at home in this one. This will be the third straight road game for the Bengals, who seem to shoot themselves in the foot just enough each week to ensure defeat. Denver's defense will bring a halt to the Broncos' five-game losing streak.

Where Eagles Dare To Dominate

Philadelphia (-175) at Dallas (+155) - If we told you at the start of the season that one of these teams would be tearing up the NFL come Week 11, you would have totally wagered on it being the Cowboys. With the (finally) suspended Ezekiel Elliott departed for parts unknown, Dallas QB Dak Prescott will be forced to pass and with left tackle Tyron Smith injured, that will leave Prescott to be swarmed by the Eagles' staunch pass rush. A win here and Philly leads the NFC East by five games.

Atlanta (+130) at Seattle (-150) - Are the Falcons finally getting back on track? Appearing to be in a post-Super Bowl LI funk all season, they actually looked like a cohesive unit while dismantling the Cowboys last week. The loss of cornerback Richard Sherman (Achilles) was just the latest blow to a decimated Seattle defense. And Falcons QB Matt Ryan has 14 TD passes in six career games against Seattle with Sherman in the lineup, four times tossing for three or more TDs in a game.