One of the toughest Grand Slams to call in tennis is the U.S. Open. The courts at Flushing Meadow are as hardened as the crowds. The challenge is not just a physical one, but an emotional one too - so who will end the tournament on top and which surprise packages might make the latter stages against the odds?

There is no doubt that most money will be gambled on Andy Murray and Novak Djokovic, both of whom sitting even in terms of form and recent success in Grand Slams (each have won one of the last two) and their general domination over the rest of the field is impressive. All of which begs the question - why bet on one to beat the other when you can bet on them both to beat everybody else?

Picking one of the two to win the title is -350, which on the face of it may not look like the best investment in the world, so what else could be likely?

If you think Andy Murray will win, you can back him immediately for the title at +180. But to pick the field against Novak Djokvic (effectively laying the Serbian) is -175, twice the price of backing either Murray or Djokovic against the field.

w2ZEDjokovic was knocked out of Wimbledon recently by Sam Querrey. Post-game, Djokovic hinted that he wasn't too upset to be free from tennis for a few weeks ahead of this exact tournament. While we doubt that means his hunger has gone, any dip in his sport is fatal with such a strong supporting cast. Players like Sam Querrey, Juan Martin Del Potro, Marin Cilic and Milos Raonic are ready to pounce on any weakness.

Should Murray and Djokovic make the final, could it end up like this battle in the 2012 final?

Maybe it will be more like the quarter-final the pair shared in 2014. It was quite a different result:

Serena Williams is the favorite at +120, but can anyone derail the world number one's seemingly inevitable march towards becoming the most successful player of all time? Probably not.

One more title and she will overtake Steffi Graf. That would have been inconceivable in the German's pomp, but it now looks most likely to happen in her home country event. Williams will be desperate to get the job done and we actually wouldn't put you off backing her. 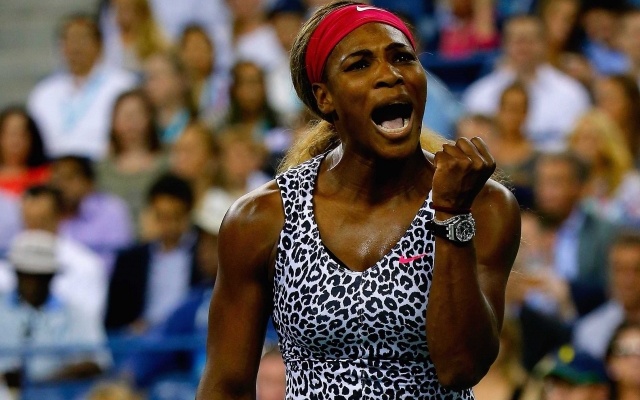 Fancy someone else to beat Williams to the title? Then we'd back Angelique Kerber at +800 before we put any money on Garbine Muguruza at the same price. Kerber has hard court experience in spades, doesn't choke and actually has a little edge over Serena is specific spots. Muguruza is a great bet on clay and even at the Australian Open when the next year begins in Grand Slam terms. But at the U.S. Open? We say avoid.

If you're not keen on backing Djokovic or Murray but want to be specific and gamble on a single player to rise to become a rare outsider at the U.S. Open, look at both Milos Raonic and Juan Martin Del Potro.

Raonic (+1200) is a great server and, after a very impressive London fortnight, was runner-up at Queens and Wimbledon. It's only a matter of time before he breaks through and Flushing Meadows is a surface which favors heavy servers. Raonic is an absolute beast in that sense.

Juan Martin Del Potro was a dogged opponent for Andy Murray already in the Olympics and could be a threat. He's +1600 and arguably a better shout than Raonic due to his big game temperament. Del Potro has it all in his locker and on his day. The Argentinian is an incredible player and capable of winning any game of tennis. However, he has just returned from a bout of serious injuries so his endurance and match fitness remains the big question mark.

Jack Sock, at +15,000, is another outside bet that could be worth taking. He's an exciting player and could turn some head at the Open.