Will Seahawks Commit A Cardinals Sin?

My Team's Next MatchSeattle Seahawks

Bringing a four-game winning streak to a halt via a stunning 17-14 home loss to the Redskins in a Washington at Washington showdown at CenturyLink Field, the Seattle Seahawks once again left themselves open to questioning. The NFC West preseason favorites dropped to 5-3, one game off the pace being set by the surprising Los Angeles Rams, who suffered one of their two losses this season at the hands of the Seahawks.

Now Seattle's first two losses of the season were acceptable - road setbacks at Green Bay and Tennessee, both at the time or currently division leaders. But the slate ahead gets rough for Seattle, with dates against Atlanta, Jacksonville, Philadelphia and Dallas looming, along with a rematch against the Rams. That's why they can ill-afford to let this one slip through their grasp.

The Cardinals certainly appear on the surface to be ripe for the picking, with Drew Stanton in at quarterback for the ailing Carson Palmer and ancient warrior Adrian Peterson carrying the ball instead of David Johnson. But at 4-4, this could be Arizona's last chance to make their season relevant, and the Redskins got well against the Seahawks after suffering two straight losses, so you never know. Let's break down Thursday's showdown, based on odds offered by Bovada. 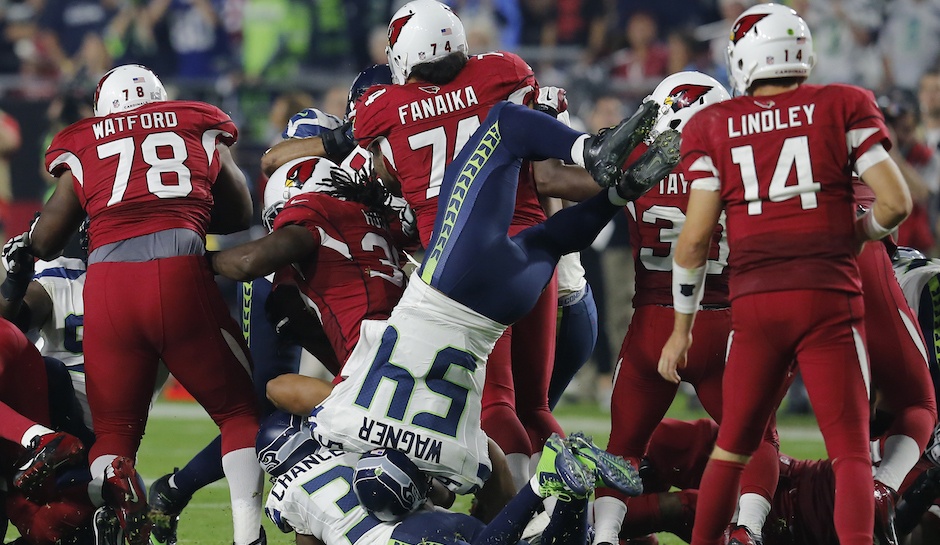 When you get right down to it, the blame for Seattle's setback against the Redskins could be laid at the feet of kicker Blair Walsh. He went zero for three on field-goal attempts, missing from 44, 39 and 49 yards. Another week like that and Walsh could be looking for work as a bartender.

Just as the Carolina Panthers go as quarterback Cam Newton goes, the same can be said for the Seahawks and QB Russell Wilson. To suggest he's their whole offense is not mere talk.

In the past two games, Wilson has passed for 749 yards.

He's also been Seattle's leading rusher in both games and over the course of the season, has been outgained on the ground by Seattle's running backs just 312 yards to 271. Running back Eddie Lacy (groin) is a doubtful starter, so Wilson will be asked to carry the load again

Of course, the also means - again much like Newton - Wilson is frequently put in harm's way. Although he's been sacked the 12th fewest times in the NFL, he's been hit the fourth-most of any NFL QB. That's a lot of pain and suffering, and Wilson can expect more of the same this week. . 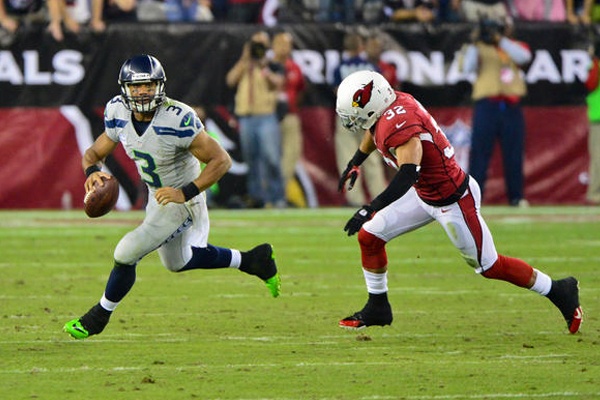 Knowing this, and aware of Seattle's susceptible offensive line, anticipate the Cardinals teeing off on Wilson. They generally blitz on a little over 30 percent of snaps as it is, and they may just amp up that process against the Seahawks in order to try and punish Wilson even more. They got to 49ers QB C.J. Beathard five times in last week's win.

Minus Palmer, on offense Stanton relied heavily on Peterson, 32. The former Vikings star touched the ball 39 times and rambled for 159 yards but on a short week, will his battered, old body be able to carry such a load again? With Seahawks safety Earl Thomas (hamstring) likely out, the Cardinals could opt to exploit the middle of the field with slot receiver Larry Fitzgerald. Washington had success against Seattle doing this via tight end Vernon Davis.

Regardless, the Seahawks should have enough to get a close win, although you might want to play the Cardinals and take the 6.5 points.