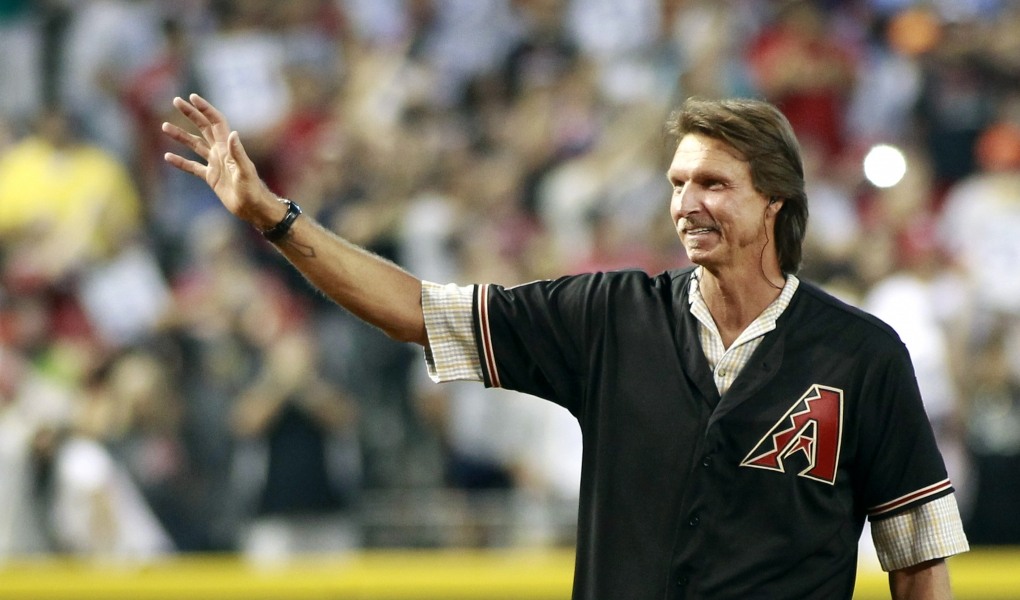 Before we jump into our MLB All-Ugly Team™, a quick reminder that this list is just friendly banter. The following players, while not the best on the eye, can always fall back on fame, riches, and success. We can laugh now, but they’ll surely get the last laugh. With that said, lets count down the top-10 ugliest players to ever grace Major League Baseball!

We really feel bad putting Urias here, but his story at least has a happy ending. A benign tumor during childhood — that required three surgeries — caused a permanent droopy left eyelid for Urias. Baseball is hard enough to play with two eyes open, little less one, so Urias’ story is something to be inspired by. Thankfully, Urias was gifted with a left arm that can toss almost 100 mile-per-hour fastballs. He’s currently penciled in to start for the Dodgers next season. Just do us a favor and keep wearing sunglasses on the mound in 2019, Urias.

The Joe Dirt comparisons are too easy to make here. Like the fictional movie character, Buchholz sported a mullet throughout most of his playing days (he’s since chopped it off). Being from Texas, Buchholz also speaks with a southern twang like the Dirt character. You can probably grab the best makeup artists from Hollywood and they’d make Buchholz look like a clone of David Spade — the actor who played Dirt. If a third Joe Dirt movie is ever made, Buchholz needs to make a guest appearance as Dirt’s long-lost brother.

Is being ugly a prerequisite to becoming an MLB pitcher? Tavarez is the third straight pitcher on our list and he’s not the last either (trust us, it’s only going to get worse). If we’re going to stick with movie character references, Tavarez reminds us a lot of Freddy Kreuger — only without the burned face and razors for fingers, but you get the point! Tavarez didn’t haunt children in their dreams, but did on TV sets during his 16-year career.

You knew this was coming. The player commonly referred to as “Big Sexy” finds himself at a modest seven in our list.

Coming in close to 300 pounds, Colon resembles Jabba The Hut in more ways than one. Hey, at least give Colon credit, he makes light of his not-so-good looks regularly. If most people had the confidence of the 20-plus-year veteran Colon, the world would be in good hands. No word yet if Colon will play in 2019, but we’re hoping just to get in more jokes on the big man.

Foster ends up on this list due to his sideburns alone. The former outfielder (finally a non-pitcher on the All-Ugly Team™) had sideburns so long, they almost connected to his mustache. It’s not that Foster kept his sideburns unkept, but it was grown in a very precise manner. His chops were L-shaped, hinting Foster paid close attention when shaving. Foster backed up his long menancing sideburns with a big bat that earned him five All-Star selections.

Another pitcher on the list, only this one is the most dominant to ever step on a mound. The “Big Unit”, as Johnson was dubbed, terrorized opposing batters with a mean fastball and an even meaner appearance. A lot of what was already said about Buchholz also applies with Johnson, another Joe Dirt lookalike. The major difference with Johnson, though, is his long and wiry frame. Johnson stands at 6-foot-10, so it’s not like you can look away when he’s around!

If you’re looking for a baseball betting destination, check out the books below. No, you can’t wager on players ugliness, but you can bet on almost everything else!

You know your face is bad when The Onion is poking fun at it with a make-belief movie called “Born Ugly” The Willie McGee Story. McGee really resembled a weasel and a rabid one at that. Like the furry animal, McGee had a small head and protruding snout. Worse, if you do a Google image search of McGee, you’ll discover he has a habit of making weird faces with a camera present. Being ugly is hard enough, but making ugly faces makes it a double-whammy of horror.

It’s probably a good thing that Nixon was one of the best base stealers of his time. His lightning-quick speed kept his ugly mug hidden. Even if it was just for a few seconds, it went a long way. Nixon has also had his share of run-ins with the law since his 17-year playing career ended, and many of them have been immortalized with too-bad-to-look-away mugshots. While Nixon has mostly conquered his personal demons, the one on his face will go with him to the grave.

Thankfully for us, Etchebarren played catcher, which kept his face hidden most of his career. Still, Etchebarren gets a first-ballot ugly vote to Cooperstown. The former two-time All-Star put absolutely zero effort into upkeeping his eyebrows. The bushy monsters formed a mean unibrow — way before Anthony Davis made it cool to have one. Even if Etchebarren cleaned those brows up, he’d still end up on this list. Maybe not at two, but definitely top-10 because this mug is unfixable.

You thought it couldn’t possibly get worse, huh? We’ll Mossi somehow ups the ugly scale to all-time levels. Mossi was like a Frankenstein experiment gone terribly wrong, more so than the movie or book could ever create. Where do we even start with him? The unusually long face? The crooked and pointed nose? His booming ears? Mossi is still alive and kicking at 89 years old. We know what you’re thinking, how does one live close to nine decades looking like that? We have no idea, either.