Denver Broncos: Should be happy with Officials

Denver brings an aggressive defense into Super Bowl 50 and they were tagged with 115 (11th most) overall team penalties during the regular season - though just eleven during their two playoff games. Clete Blakeman (CB) is the Head Official for Super Bowl 50 and his numbers in Denver games are a little lopsided. The Broncos are 5-0 since 2010 when Blakeman was the lead Zebra. In those contests the Broncos were on the road against TEN MIA OAK and at home vs SD and OAK. Although not the most talented opponents - the 5-0 mark is a stat to consider. Clete's last Denver game was a 47-17 Broncos win vs Oakland during Week 17 in 2014 and flags were 9-1 Raiders. Penalties in Blakeman Crew called Broncos battles tally OPP 40 DEN 21 though 20 of the OPP flags were charged to the uncommitted to discipline Silver & Black. Denver was flagged five times during Super Bowl XLVIII.

Carolina Panthers: Not as successful when up against the Clete Affect

Carolina is a hard hitting and fast playing group on both sides of the ball. The Panthers were flagged 103 times (23rd least) in the regular season and just eight times during their two playoff matches. Also since 2010, Carolina is 2-2 in Blakeman Crew called games as they sandwiched home losses to ATL and NO with home wins over NE and HOU. The most recent game was versus the Texans in Week 2 this season and both teams racked up ten penalties. The flag total is CAR 29 to OPP 20 in Blakemen’s four career Panthers games as the top official. Clete’s Crew have called 11, 10, 14 and 8 total penalties in the four playoff games he has officiated so the lower number of flags is a small victory for Carolina. Blakeman’s Crews called 43 pass defense penalties in 2015, a mix of pass interference, illegal contact and defensive holding, so the Cats will need to be careful with their aggressive pass coverage. 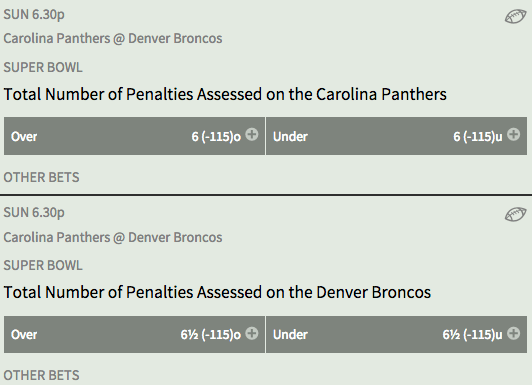