NBA Teams To Back On Sunday 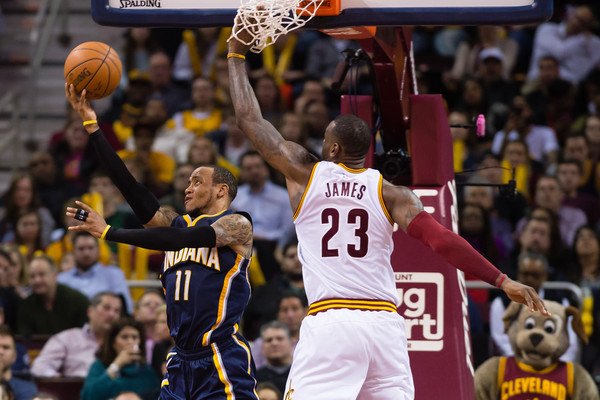 The Cleveland Cavaliers have been spread disasters over the last two weeks. It wasn't until their most recent win over the Philadelphia 76ers that they broke out of their slump.

With the Indiana Pacers fighting for their playoff lives, it's possible the Cavaliers slip up here. But the Pacers are 2-9 on the road since the All-Star break, with a bottom-six net rating. Having lost each of their last three games, and seven of their last 10 outings overall, they're more easy fodder than worthy challenger for the Cavaliers at this point.

So the Miami Heat have fallen back down to earth. They remain one of the league's hottest teams since Jan. 17, but they've gone 5-5 over their last 10 games, the last of which was a terrible loss, at home, to the no-good New York Knicks.

The Denver Nuggets haven't looked great of late, either. Their playoff hopes are dwindling now that they've lost three in a row, including a matchup to the now eighth-place Cleveland Cavaliers. They still have the NBA's best offense since Nikola Jokic re-entered the starting lineup for good, but they pair it with the worst defense.

Though the Nuggets have been playing .500 ball on the road since the trade deadline, each of their last three losses have come away from home. They need this game if they're going remain the playoff chase, and that's something to consider. But the Heat are right there with him, and as the more balanced team, they're the clear pick. 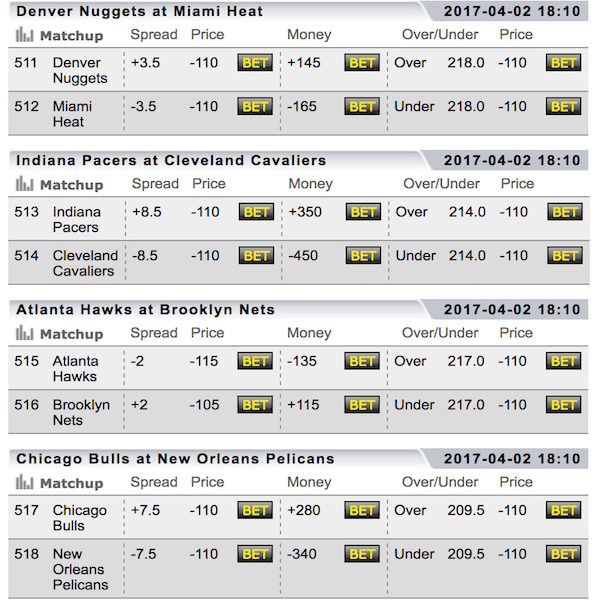 There's no reason to pick against the Golden State Warriors, who have won each of their last 10 games. Kevin Durant is expected to miss at least another week, but Stephen Curry and crew have been steamrolling opponents anyway.

The Washington Wizards, at one point, were the hottest team in the NBA. But they've cooled off a bit in recent weeks, and the Warriors are winning games by an average of average of 15.2 points during their most recent stretch. On Friday, Golden State messed around and still beat the Houston Rockets by nine. Taking care of business against a shallower, less-threatening Washington squad should be no problem.

Here's a barometer for the Oklahoma City Thunder: Do we think Russell Westbrook is going to tally another triple-double, his 40th of the season, against the Charlotte Hornets?

And since that's the case, knowing Oklahoma City almost never loses when Westbrook goes for a triple-double, our pick has been made for us.

The Atlanta Hawks are a bad team without Paul Millsap. They have won just two games without him all season, against the Phoenix Suns and Philadelphia 76ers.

The Brooklyn Nets catch a lot of squads off guard, and the Hawks are working off a Saturday night loss to the Chicago Bulls. Brooklyn also pummeled Atlanta the last time these two teams met, winning by 15 points.

Still, it's tough to shake the feeling that the Hawks will win, even without Millsap. They have Kent Bazemore back, and as long as Thabo Sefolosha is ready to rock, they should have enough juice to overthrow what is still the league's worst team.

San Antonio Spurs head coach Gregg Popovich has already made the decision to bench LaMarcus Aldridge, Danny Green and Manu Ginobili for this one. Kawhi Leonard looks like he's going to play, but we can't be sure.

The Spurs are deep enough to win games against playoff opponents shorthanded, but the Jazz are trying to fend off the Los Angeles Clippers for fourth place in the Western Conference. And as good as Leonard is, his job becomes exponentially harder without any one of Green, Ginobili and Aldridge in the rotation.

Even if the Spurs win, this game should be a close one.