Aiming to close out May the same way they opened it (7-1 run) St. Louis is riding a three game winning streak. What happened in between is a bit of a disaster as the Cardinals posted a 5-9 record. However, thanks to Chicago being just as streaky, the Cards still own a 4.5 game lead on the Cubs in the NL Central Division title chase. RHP Lance Lynn (3-4 ERA 346) gets the call tonight looking to rebound from a 5-0 loss the Royals last Friday. Lynn is a solid 2-0 in bounce-back contets this season.

With the Los Angeles Dodgers largely playing light out ball to open their season, and the defending World Series Champion San Francisco Giants starting to find their grove, Arizona is slowly slipping out of the race in the NL West. Despite a recent 6-1 run, the Diamondbacks are still seven games behind the Dodgers. After giving up 20 runs in 19.1 innings pitched during his last five starts, RHP Josh Collmeter (3-5 ERA 5.19) attempts to right his ship as he opposes Lynn in the battle on the bump.

Cardinals vs Diamondbacks MLB Game Day Call: Getting swept is nothing new to the Desert Snakes as Pittsburgh, Los Angeles and Philadelphia have each brought out the brooms against Arizona this season. St. Louis has posted series sweeps versus the Reds and Pirates and we like them to add a third here. We are soaring with the Cardinals and a 500 unit wager on money line odds posted at the SportsBetting.ag online Sportsbook. We also like the following NHL playoff puck line wager.

Bonus Bet: Chicago vs Anaheim NHL Western Conference Final: The Blackhawks are looking to push the Western Conference to a seventh and deciding game with a win at the United Center tonight. The Ducks would love the extra rest they would receive with a series ending victory tonight. Fly with the Ducks and 500 unit wager on the SportsBetting.ag sportsbook puck line price 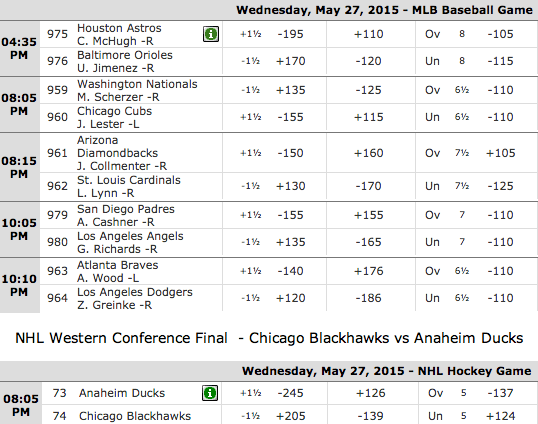 The UFC heads to Salt Lake City for a huge undisputed welterweight title fight between number one ranked pound for pound fighter and world champion Kamaru Usman as he defends his title against number two ranked Leon Edwards. The 170 pound contest is a rematch from way back in December 2015, where Usman claimed a dominant decision win […]

The boxing world comes together for the world heavyweight title unification rematch between current reigning champion Oleksandr Usyk and former two-time heavyweight champion Anthony Joshua this weekend. Live from Jeddah in Saudi Arabia, the Ukrainian will look to go back-to-back over the British fighter to solidify himself as the number one heavyweight fighter in the world while […]

Tennis returns to the USA for the Cincinnati Open (now called the Western & Southern Open for sponsorship reasons) this month in preparation for the US Open. A host of the best players in the world are confirmed to be competing in Cincinnati in the final big warm-up tournament before the final Grand Slam tournament […]

The UEFA Super Cup takes place this week live from Helsinki when UEFA Champions League champions Real Madrid take on UEFA Europa League champions Eintracht Frankfurt. Real Madrid earned their 14th European crown with a 1-0 win over Liverpool back in May, while Frankfurt claimed a win over Rangers on penalties to win their first […]