Here’s a breakdown of the first-round series between the Oilers and Sharks, with odds courtesy of Bovada.

Playoff hockey is returning to Edmonton, as the high-flying Oilers prepare to face the San Jose Sharks in what is sure to be a thrilling best-of-seven series.

Fresh off an Art Ross Trophy victory as the league’s top point producer, Oilers captain Connor McDavid will get his first taste of NHL playoff hockey when the series officially kicks off on Wednesday night in San Jose for Game 1. 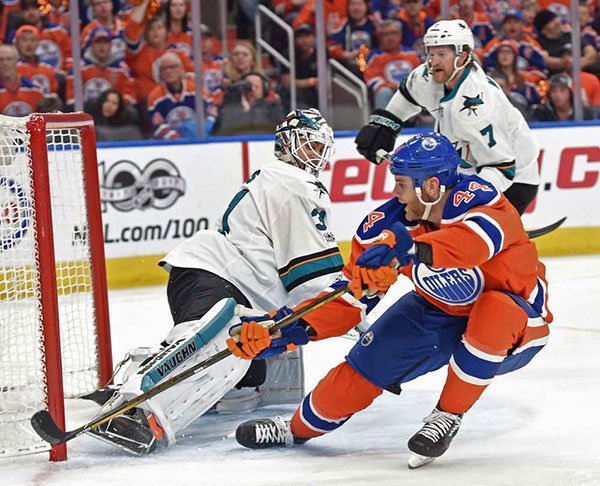 Edmonton holds home-ice advantage, which will be crucial in this series. If the Sharks get a split in Alberta and head back to California with home ice, the Oilers may find themselves in deep trouble.

McDavid and the Oilers played their best hockey at Rogers Place, where the club posted a remarkable 25-12-4 record this season.

There won’t be a shortage of offense in this series, which features an Oilers team that finished the regular season eighth in scoring, averaging 2.96 goals per game. The Sharks may have been a middle-of-the-pack team when it comes to goal production but the club still has a handful of dangerous weapons offensively. Look no further than  Joe Pavelski, who led all Sharks forwards in points with 68 — falling one goal shy of 30 during the 2016-17 season.

Where the Oilers may run into some trouble is trying to contain Sharks defenseman and likely Norris Trophy winner Brent Burns, who led the club in scoring this season with 76 points in 82 games played. Burns’ ability to create offense and jump into the play is a huge advantage for the Sharks. It’s an area where the Oilers lack tremendously and may be the main reason the Sharks advance to the second round.

With an average defense, the Oilers have been saved throughout the season by netminder Cam Talbot, whose 42 wins tied for the league lead with Washington goalie Braden Holtby. Talbot also posted seven shutouts, which ranked tied for third overall. The Oilers will need Talbot to once again be the saviour against the Sharks, who will more than likely throw everything they have at the goaltender.

The head-to-head history between the Oilers and Sharks proves we’re in store for a gruelling series. In the last 10 meetings, each team has skated away with five wins apiece during that span. However the matchup over the last three meetings may be a telling tale, as the Oilers have posted a 3-0-0 record during that stretch.

It will be tough for this aging Sharks team to keep up with a younger, faster and in some areas more skilled Oilers team. Much like McDavid’s been doing all season long, the sophomore sensation will carry Edmonton to the second round, but it won’t be easy.