Rangers in Need of Some Home Cooking at MSG

Are The Rangers In Danger?

The New York Rangers return home in dire straits, down 2-0 to the Ottawa Senators. Will the Rangers be able to turn things around at home? We analyze the odds, based on the data provided by Bovada.lv:

The last time the New York Rangers returned home 2-0 down in a playoff series was the 2014 Stanley Cup final, and they lost that one to the Los Angeles Kings in five games. In fact, the analytics for the Rangers when opening a playoff series with consecutive road losses are downright frightful.

The Rangers are 1-20 in this scenario in franchise history, the only victory a seven-game takeout of the Washington Capitals in the second round of the 2013 playoffs. Generally, though, the end comes quickly for New York. The Rangers have been swept six times when coming home down 2-0 and have exited in five games on another seven occasions. They are 9-12 in Game 3 when down 2-0 in a series and playing at home.

Home ice hasn't been kind to the Rangers of late in the postseason, although the optics depend upon how small of a sample size you choose to study. They rallied with consecutive home-ice wins to eliminate Montreal in the opening round, so New York is on a two-game home-ice winning streak and are 2-1 at Madison Square Garden this spring. But take it back a bit further and the Rangers have won just two of their last eight playoff games at MSG.

Michael Grabner and Derek Stepan each scored shorthanded goals in Game 2, marking the first time the Rangers have scored twice while shorthanded in a playoff game since Brian Leetch and Darren Turcotte did so on May 1, 1992 in Game 7 of the division semi-finals against New Jersey. That part of New York's special teams is rolling but the power-play resembles the walking dead. New York is two for 23 with the man advantage in the postseason, a dismal 8.69 percent success rate.

The Rangers did get two goals from Brady Skjei in Game 2. He produced the first multi-goal game of his career (regular season or playoffs), becoming the first Rangers rookie defenseman to score two goals in a game since Brian Leetch in the 1989 division semi-finals against Pittsburgh.

In Game 2, Ottawa became the first team to overcome a two-goal deficit in the final five minutes of regulation and win a postseason game since Anaheim on April 27, 2014 against Dallas. 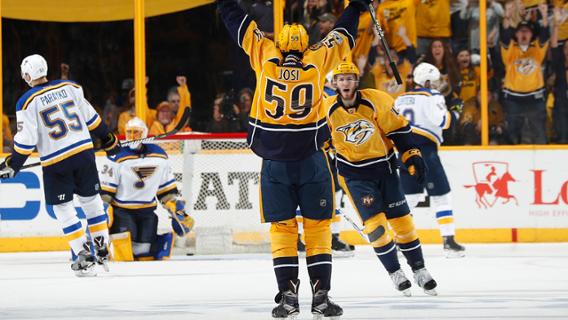 The defense never rests for the Predators, and Nashville's defense has given St. Louis no rest at all in this series. In fact you could argue that they are wearing out the Blues.

Nashville's defense combined for 10 points as the Predators swept Chicago in the opening round. In three games against the Blues, the Nashville rearguard has accumulated 11 points. Predators defensemen have figured in the scoring of 12 of their last 13 goals.

In Game 1 of this set, the teams went over the total of five. In Game 2, it was a push and in Game 3 they went under. The total is five again for Game 4. Expect the latter outcome to become the trend.