Bet on these EPL players to score

Are we convinced as neutrals that Tottenham Hotspur really have enough to beat Chelsea on Wednesday? As we saw at the close of last season, Spurs choked when the pressure was on.

So how do Tottenham change things against a Chelsea side that is going for a record fourteenth win on the spin? In short, they probably won't.

While they undoubtedly have the skill, players and desire to climb the league, they don't have a strong enough mentality. Far likelier is Chelsea to win from a losing or tying position, as they did earlier in the season. Spurs had dominated the first half and gone a goal ahead through Christian Eriksen, but couldn't hold on and succumbed 2-1. Chelsea have prolonged that unblemished winning record ever since. Eden Hazard is +300 to score in a Chelsea win, which is a bet worth looking into. 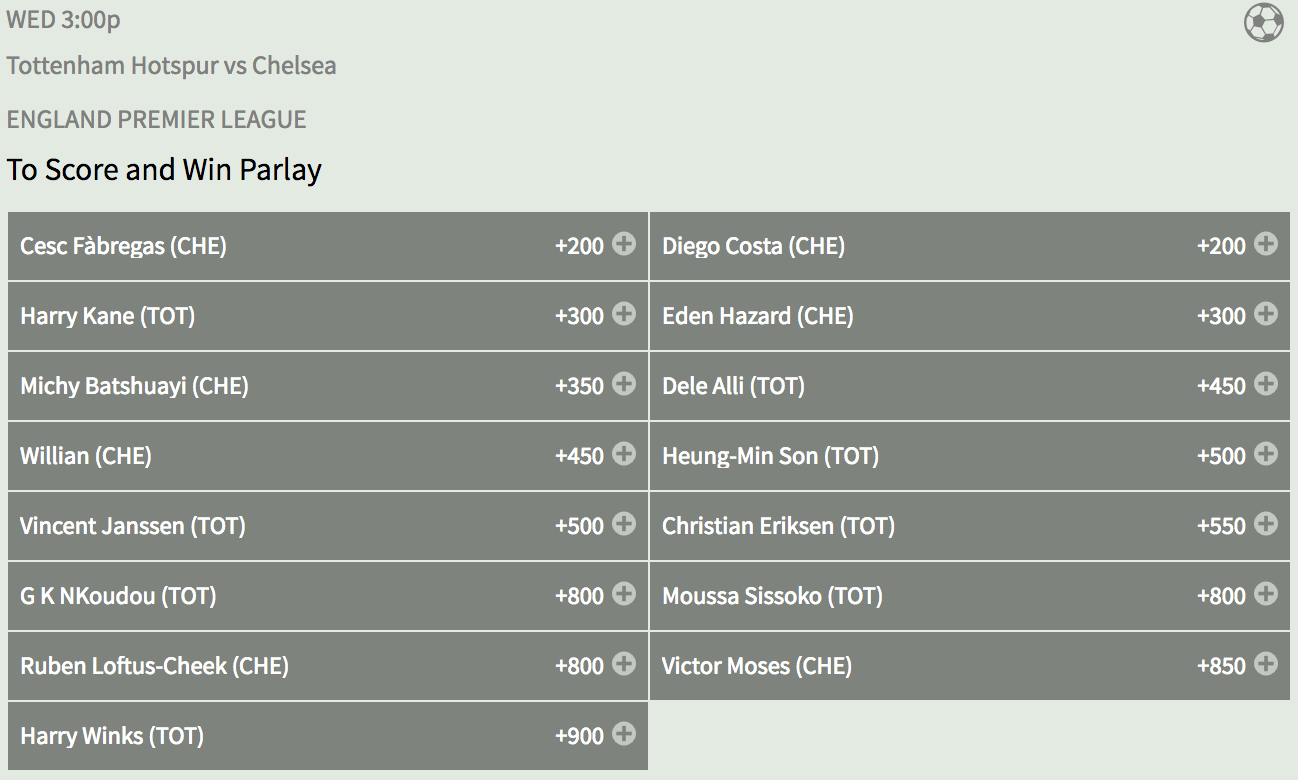 Middlesbrough can consider themselves really unlucky not to have taken at least a point from Old Trafford. Boro are +700 to score first and tie and that looks a great price.

After winning the crucial clash against Manchester City, Jurgen Klopp's Liverpool march on with one of the easiest remaining fixtures. Sunderland looked woeful in getting thumped at Burnley and Liverpool's luck extends to Lamina Kone even getting injured. Adam Lallana is +225 to score in a Liverpool victory - invest!

City have to win against a determined Burnley side, and may need the help of their superstars to stretch a stubborn away side. Back Aguero and De Bruyne both to score at +210.

The underrated Kevin Mirallas is +700 to score first and Southampton will likely focus all their attention on stopping Lukaku. Back the other Belgian and make hay.

These are the games that Tony Pulis goes for like cup finals. Back Jonny Evans to score at any time The former United lynchpin is +850.

Last season's final game at Upton Park saw the Hammers beat the Red Devils 3-2 after the visiting United bus was attacked by home fans. We can see revenge this Monday for Mourinho's men, and Anthony Martial is a great bet at +1400 to net United's opener between 21-45 minutes. He had an outstanding game against West Ham in the reverse fixture for this game just six weeks ago:

Two in-form teams clash at Dean Court as Bournemouth welcome Arsenal to the south coast. With Olivier Giroud's 'scorpion' goal fresh in the memory and no Wilshere for The Cherries, Arsenal can win. Take Sanchez scoring in that win at +160.

Christian Benteke will score for Big Sam, it's a matter of time. Back him at +350 to score first.

Marko Arnautovic returns from a three-game ban and will score on his comeback. Any time, he's value at +200.