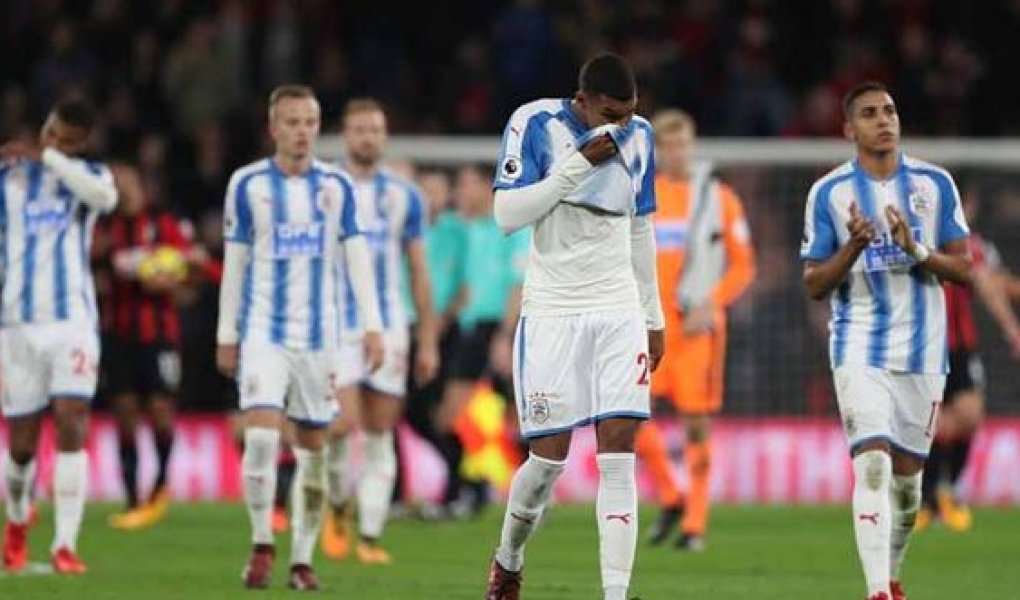 No team wants to endure relegation from the Premier League thanks to it being the world’s most-popular domestic soccer competition and the fact is is massively lucrative to the 20 teams competing in it.

The nature of the beast, however, means that three teams have to be and will be relegated from the Premier League into the Championship, but which three teams do we think that will be?

Choosing an outsider to be relegated can be a profitable soccer bet to make, so feast your eyes on our guide to the Premier League relegation betting odds.

Huddersfield Town shocked the soccer world last season when, in their first-ever Premier League campaign, managed to navigate their way to a 16th place finish and finish four points off the relegation places.

This season, however, the writing seems to be on the wall and bookmakers arund the world have already written off Huddersfield’s chances of surviving after only six games into the 2018-19 campaign.

Huddersfield Town
To be relegated Odds
-300

Through the first six matches, Huddersfield have only managed two draws and lost four games. Perhaps even more worrying than this lack of wins is the fact they only scored three goal and conceded 14 during those opening six matches.

David Wagner‘s men lost 3-0 at home to Chelsea on the opening day of the season and then 6-1 away to Manchester City on matchday two. Draws against Cardiff City and Everton followed, before back-to-back defeats at home to Crystal Palace and away to Leicester City.

Hammering another nail in the Terriers’ coffin is the terrible run of fixtures towards the end of the season.

Town have to face Tottenham Hotspur, Liverpool and Manchester United in three of their final five games.

Should they need points at this stage of the competition, they are very unlikely to get any joy in these games.

Neil Warnock is a manager who is known for being organized in defense and creating teams that are difficult to breakdown. The problem with this strategy in the Premier League is the majority of sides have enough talent to unlock teams who sit deep and attempt to soak up pressure, as is evident by the 4-1 loss at Chelsea and the 5-0 home defeat at the hands of Manchester City.

Cardiff’s main problem is they have a squad of players who are essentially Championship standard.

As they are a club of small stature, they have been unable to bring in the quality signings that were needed to compete at the highest level.

Unfortunately for fans of the Bluebirds, this probably means Cardiff will finish rock bottom of the Premier League this season and possibly with the lowest-ever points total, whcih stands at 11.

It is amazing to think that a club as significant as Newcastle United could be among the favorites to be relegated from the top tier of English football, but it is a very real possibilty this season, much to the anger of Magpies fans.

Newcastle finished 10th in the table last season and this was seen as an excellent result by their fans because of the limited budget manager Rafa Benitez had to work with and the off the field problems surrounding the club.

This season Bentiez’s men started badly with two draws and four defeats from their first six games, a period that saw then score four goals and concede eight.

Once again, Newcastle owner Mike Ashley has failed to sufficiently back Benitez in the transfer market. While Benitez managed to spend £31.14 million, he also recouped £38.99 million from sales.

When you combine a squad that has too many second-rate players with an ownwer who won’t back the manager and who is trying everything in his power to sell the club, you have a recipe for disaster.

I would be very surprised if Benitez is in charge of Newcastle United after January, especially if is once against left high and dry in the January transfer window.

Fulham were promoted to the Premier League at the end of last season and while they are one of the favorites to return from where they came, I want them to keep their Premier League status for another year.

Not only did Fulham manage to keep hold of their prize assets, manager Slavisa Jokanovic was allowed to spend £98.10 million on new recruits, including Germany star Andre Schurrle and Aleksandr Mitrovic, the latter costing more than £18 million.

Jokanovic loves to play a free-flowing attacking style, which is a joy to watch, but he seems to lack a plan be or be willing to ask his players to be more defensive.

This attack-minded strategy means his defenders are often left exposed at the back, so conceding goals is going to be a major probably, particularly against the stronger teams.

If Fulham do finish the season in the bttom three, it will be a major shame for the Premier League because it is refreshing to see a newly promoted team grab the league by the horns and have a real go at staying up or better.