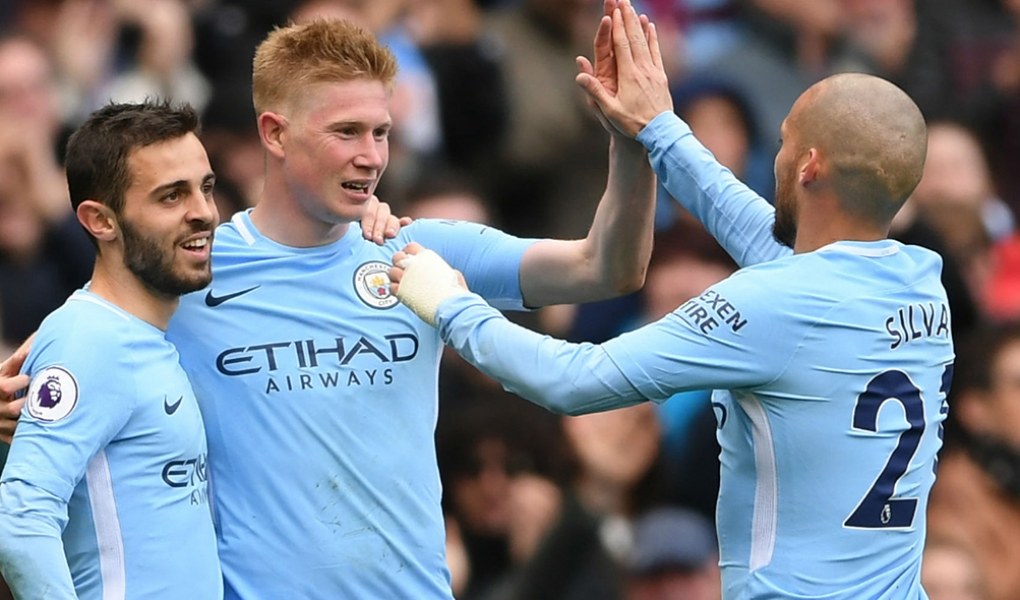 Before you place a soccer bet on who you think will win the 2018/19 Premier League, be sure to check out our expert predictions and the latest soccer betting odds provided by Bovada.

Manchester City are favorites to win what would be their sixth top-flight title and their fourth Premier League title. It may not be plain sailing for Pep Guardiola’s boys as Liverpool and Chelsea, among others, also look strong.

After demolishing the 2017/18 Premier League season, it is easy to see why Bovada price Manchester City as odds-on favorites with betting odds of -150 on them lifting the Premier League trophy again this season.

“The Citizens” set 11 new Premier League records and matched thee more as they marched onwards, seemingly unstoppable, to the Premier League title. City won the title with 100 points, the most of any team in Premier League history.

They also enjoyed the most away points (50), had the most victories (32), the most away victories (16), scored the most goals (106), had the best-ever goal difference (+79), most consecutive wins (18) and were only on the losing side for a total of 153 minutes throughout the entire season among others.

City have started the current campaign in style, winning four of their five games and drawing once. They have managed this despite losing the services of talismanic midfielder Kevin De Bruyne, who is out injured until the end of the year.

Pep Guardiola invested £64 million in new players during the summer, the bulk of that being spent on winger Riyad Mahrez who gives the side even more flair and attacking options.

-150 is a short price especially as Guardiola has said he wants to focus more on winning the Champions League, so it may be best to look for more value elsewhere.

The +225 Bovada is offering on Liverpool winning the Premier League this season looks incredible value in its own right, but when you factor in the start The Reds have made it looks like a soccer bet you cannot afford not to take.

Jurgen Klopp’s men finished fourth in the Premier League last season in addition to reaching the Champions League final, where they lost 3-1 to Real Madrid. Many soccer pundits and experts blamed this relatively poor season, by Liverpool’s ambitious standards, on Klopp’s squad lacking strength in depth.

This cannot be said this campaign after Liverpool bolstered their ranks with some talented and exciting players. Gone is the calamity goalkeeper Loris Karius and in came the £56.25 million Alisson to shore up the goalkeeping position.

Add these stars to a team already boasting of the evergreen James Milner, Jordan Henderson, Virgil van Dijk and a forward line that sees Mo Salah, Firmino and Sadio Mane and it is easy to see why Liverpool are fancied for glory.

Liverpool won their opening five Premier League games of the season and managed to brush aside Paris St. Germain in the Champions League and this really could be their year if they can keep up the energy and pressing game they are now famed for.

While the betting odds suggest the Premier League will be won by either Manchester City or Liverpool you cannot discount the chasing pack, especially Chelsea who have started the season on fire.

The Blues may have lost goalkeeper Thibaut Courtois but they replaced him with the world’s most expensive goalkeeper in Kepa Arrizabalaga who has done a superb job to date.

They also acquired the services of Jorginho in the centre of their midfield. The Brazilian is a firm favorite with the new head coach Maurizio Sarri who worked with the defensive midfielder at Napoli.

Perhaps the biggest boost for Chelsea was retaining Eden hazard who was heavily linked with a move away from Stamford Bridge this summer.

Chelsea finished fifth last season but this time around they don’t have Champions League football getting in the way. They are competing in the Europa League but the teams in that competition are much weaker so should not distract them from their Premier League endeavors. If we ere to bet on a team other than Manchester City or Liverpool to win the title it would be Chelsea, although they will need to steer clear of any major injuries as their squad is quite small.

A lack of investment in players over the summer has seen Tottenham Hostpur’s, last year’s third-place finishers, odds plummet to +3300. Spurs won three and lost two of their opening five game then went on to lose a Champions League group stage game against Inter Milan to make it three consecutive losses, the first time this has happened to manager Mauricio Pochettino.

Spurs have a very small squad, one that simply is not strong enough to compete for the title over the course of a season.

Manchester United finished 19 points behind rivals Manchester City last season and nothing has happened to suggest this season will be any different. United, like Spurs, lost two of their opening five games and it seems Jose Mourinho is already under pressure to deliver results.

United are not the side they once were, Mourinho still appears to not know his best starting XI or system and for that reason we would not suggest betting on them to win the Premier League this season, even with +3300 betting odds.