The Penguins blew a third-period lead for just the third time all season in their Game 5 loss to the Capitals. Can they lock this series down with a Game 6 triumph at home? We've got all the details, based on odds provided by Bovada.lv:

For just the 10th time in franchise history, the Capitals rallied to win a playoff game in which they trailed heading the third period, scoring three times to beat the Penguins 4-2 in Game 5. Pittsburgh was 37-1-1 when leading after two periods during the regular season.

Even though they still trail Pittsburgh 3-2 in the series, there were plenty of hopeful signs for the Capitals in the victory. Captain Alex Ovechkin scored for the first time since Game 1 and now has a point in 15 of 18 career playoff games against Pittsburgh. With 12-14-26 numbers, including 2-3-5 this season, Ovechkin has averaged 1.44 points per game against the Penguins in the postseason.

Evgeny Kuznetsov netted what proved to be the game winner and shares the team lead of five goals with Ovechkin and Nicklas Backstrom. Backstrom paces the Caps with 5-6-11 numbers and has put up 3-2-5 totals in this series. Backstrom has tallied 23 points in his last 24 playoff games. At the same time, goalie Braden Holtby looked like his Vezina Trophy-winning self in Game 5 after struggling to find his form in the first four games of the set.

The Penguins are 13-3 all-time when leading a playoff series 3-1. During the Sidney Crosby/Evgeni Malkin era, they are 16-14 in games when they can eliminate an opponent, including 1-2 this season. Pittsburgh has a 15-2 slate all-time when opening a series 2-0 and are 8-0 in that scenario with Crosby in the lineup. The Penguins have been outshot in eight of their last nine playoff games but are 6-2 in those games. 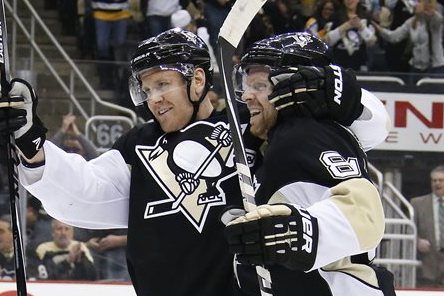 Pittsburgh has captured four of its past five playoff series over the past two springs with a set-clinching victory on home ice. Penguins goalie Marc-Andre Fleury's .954 home-ice save percentage is the second-best in this year's playoffs. They owns a .722 home-ice winning percentage in the last two postseasons. Nine of the 15 goals scored by Penguins forward Phil Kessel over the past two playoff years have been netted on home ice. He has 4-5-9 totals in elimination games the past two springs. 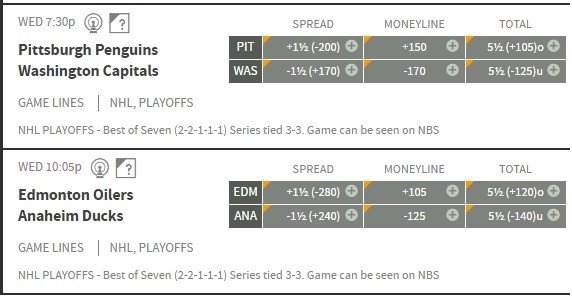 Keep an eye on Penguins forward Bryan Rust. He has seven goals and eight points in 10 career playoff elimination games, and had his first three multi-goal playoff games come in series-clinching victories.

BetOnline.ag is confident that the Penguins will carry the day. They are listing the Penguins as -255 to win this series. You'll get odds of +215 if you believe that the Capitals can complete the rally from their 3-1 disadvantage.

Over at TopBet.eu, they have the Penguins as the -115 chalk to win the Eastern Conference and advance to the Stanley Cup final for the second successive spring. The Capitals, who haven't played in the Cup final since the 1997-98 season, are the +300 second choice.