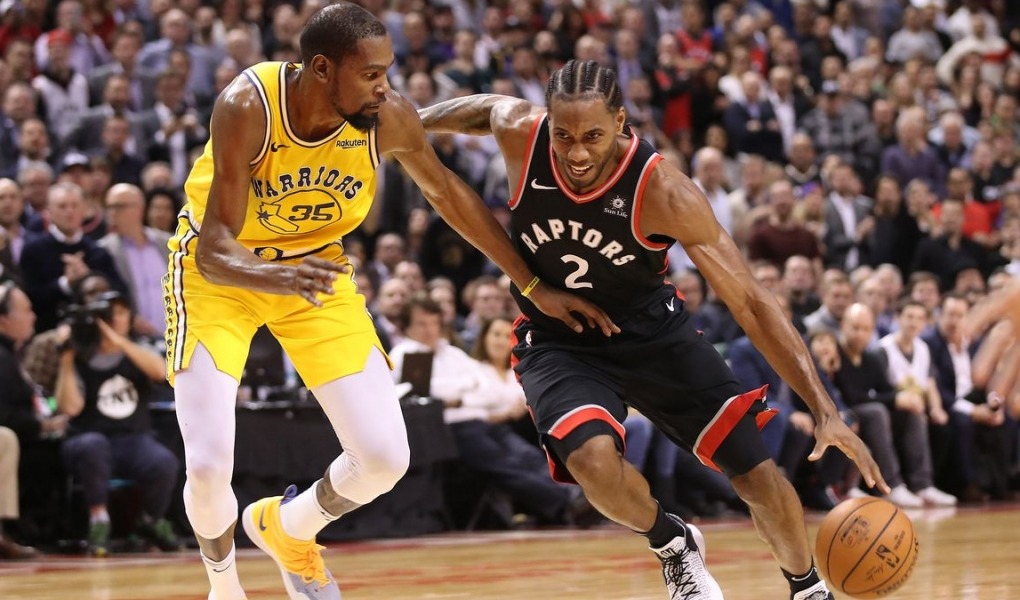 Since September — right before the preseason began — NBA Finals betting futures have shifted wildly. Bovada’s current odds, compared to their lines in September, are listed below for reference.

As you can see, Toronto and Houston‘s odds have fluctuated the most, and in opposite directions. Kawhi Leonard has returned with a vengeance, helping the Raptors initial line soar by +650. Meanwhile, Houston doesn’t seem to be the same team that won 65 games last season as their odds have dipped by a whopping +700.

With almost 30 regular-season games to judge from, these four teams give you the best chance at cashing out an NBA futures bet once June rolls around.

No surprise here, the Dubs remain a must-bet futures play. Though, its odds have fallen ever slightly after a rocky start to the season.

The budding dynasty reached a new low in the Steve Kerr era, losing four straight games in a row earlier this year. All this while the locker room was embroiled in drama after a shouting match between Draymond Green and Kevin Durant — which earned Green a one-game suspension.

Regardless, it’ll take more than a one-game war of words to end the Dubs dominance over the league that’s endured the past four years and resulted in three rings. The only scenario we see Golden State slipping is if Steph Curry gets injured.

A groin injury kept Curry out of the lineup 11 games this year, a stretch where the Warriors went 5-6. Since the 2015-16 campaign, the team is a pedestrian 26-23 when Curry doesn’t suit up. Despite the abundance of All-Star talent on the roster, there’s no question Curry is the engine that makes this team go.

A Curry-led Dubs team should command a heavy futures bet from you. However, we advise spreading smaller bets to the three teams below, in the event that misfortune strikes Curry come playoff time, which isn’t far fetched considering his extensive injury history.

The Eastern Conference is a four-team race between Toronto, Boston, Milwaukee and Philadelphia. To make things easier on you, we’re going to narrow that group down even further to two for betting purposes.

Immediately, we’re taking out the 76ers. Don’t let its star power lure you in. Cracks are already showing in the pavement between the Jimmy Butler, Joel Embiid, and Ben Simmons grouping. It’s simply going to take more time for that trio to gel, and that’s if Butler doesn’t walk in free agency.

Boston is also out of the mix. Its offensive woes — a clear lack of shooting pedigree and ability to draw gimme fouls — that have plagued them all season long aren’t going away unless the roster receives a midseason makeover.

That leaves us with the Raptors and Bucks. Let’s start with conference-leading Toronto. Its sheer depth and versatility across the roster makes them serious threats to Golden State, even with a healthy Curry. They have a unique ability to play big or small, fast or slow, and morph themselves into whatever a given game demands.

Futhermore, the Raptors’ roster is dotted with long-limbed defenders. For a team like the Dubs that thrives on spacing and mismatches, that could become chaotic, as it did in the 2016 Western Conference Finals when Durant was still in Oklahoma City.

While Toronto’s recent playoff mishaps might give you pause, Leonard gives this team an edge it lacked with DeMar DeRozan as its leader.

Milwaukee has already given Toronto problems this season, who’s to say that won’t continue come postseason time? The Bucks have won two prior meetings, the first by 15 points at home (a game neither Leonard or Giannis Antetokounmpo played in) followed by a 104-99 victory across the border.

There’s a lot to like about this well-coached Milwaukee squad. Head coach Mike Budenholzer has unlocked the team’s full potential on both ends of the court. The Bucks currently rank second in offensive efficiency and fourth in defense.

Lastly and perhaps most importantly, Antetokounmpo is finally blossoming into the league’s most dominant player, as many have long predicted. With a gaudy stat line of 26.5 points, 13.3 rebounds, and six assists a game, Antetokounmpo has to be a front-runner in the MVP race (or at least tied alongside Leonard).

Toronto and Milwaukee seem destined for an Eastern Conference clash, one that’ll be tightly contested, so you’re better off betting both here.

Check out the following sportsbooks to lock in your NBA championship futures bets now!

Hypothetically speaking, if Steph Curry does succumb to injury as previously mentioned, who become the biggest beneficiaries out West? Look no further than the Thunder.

It may be hard to believe in today’s NBA, but defense still matters (kinda). And in terms of defensive efficiency, no one ranks higher than the Thunder, giving up just 101.6 points per 100 possessions. Ridding themselves of Carmelo Anthony over the offseason was clearly addition by subtraction — just ask Houston who are still licking their wounds after its failed Melo experiment.

Plus, in Russell Westbrook and Paul George, OKC has arguably two top-10 players on their roster. Even the two’s biggest critics can’t downplay either’s ability to dominate on either end of the floor, which is ultimately what wins games come playoff time — as long as you’re not jacking up 43 shots in an elimination game…

Again, we’re not saying bet the house on the Thunder, but a small bet can become a big win if disaster strikes out in Oakland.