There’s a new leader in the Metropolitan Division as the Rangers jumped past the NY Islanders with their 3-1 victory in Washington last night. Pittsburgh remains in the three hole as they are five points behind the Blueshirts. The Penguins are 6-1-1 over their last eight games – outscoring their opponents by a combined 26-16 margin. Edmonton is three points “behind” Buffalo in the Connor McDavid sweepstakes and the Oilers have lost five straight games including three in a row on the road.

Wow! Try as we might, we can’t recall a time when four teams were tied for the overall lead in the NHL this late in the season. The Canadiens, Rangers, Predators and Ducks all have 91 points. Detroit has 85 points and, if they win their games in hand, they would move to third overall – one point behind Montreal and four back of the Rangers. The Red Wings snapped a mini two-game losing streak as they pummeled Edmonton 5-2 on Monday. Injury riddled Columbus has lost eight of their last ten games as the Blue Jackets play out the string on a long losing season. We like the Red Wings in this contest.

NHL Parlay Prediction: Though neither of them are in jeopardy of missing the NHL playoff party, Pittsburgh and Detroit know they need to take care of business when they face cellar dwelling squads. Parlay the Penguins and Red Wings money lines with a 500 unit wager at the Bovada sportsbook 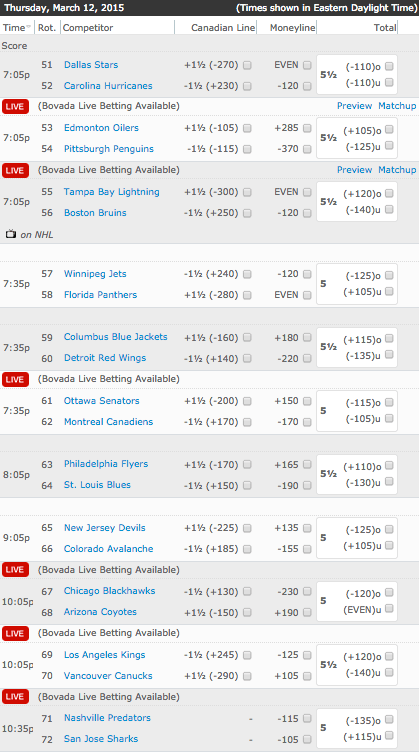