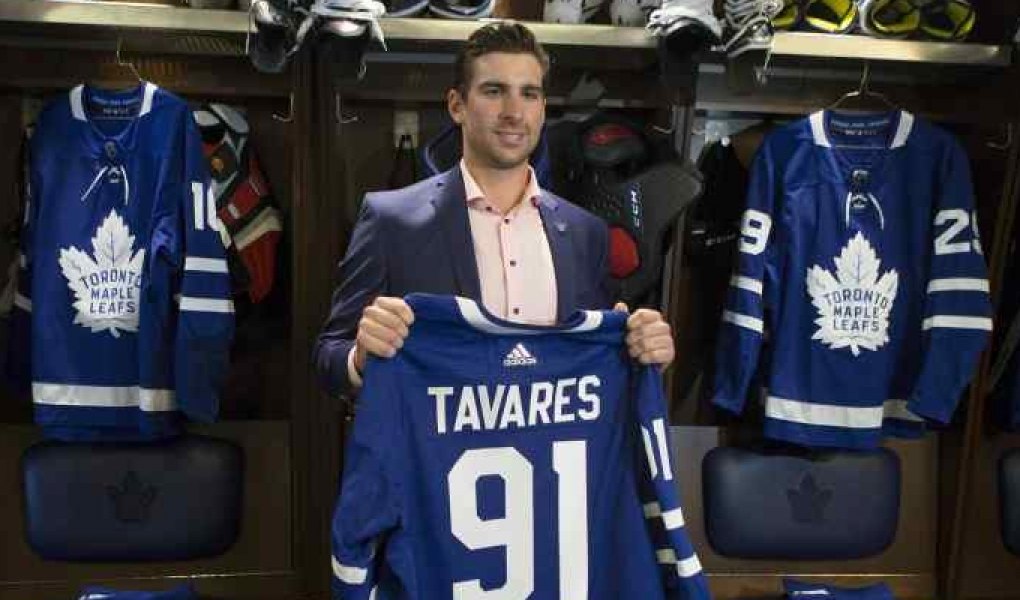 Two players changing teams completely changed the landscape of NHL contenders. From the moment the Toronto Maple Leafs signed the prize possession of the 2018 unrestricted free agent class, center John Tavares away from the New York Islanders, Leaf Nation went into a frenzy and the future book wagers began pouring in on the team. This created a previously unseen event. Bovada lists the Leafs as both Stanley Cup and Eastern Conference favorites.

Being favored is nothing new to the San Jose Sharks. For several years, the betting line was that this would be San Jose's year, but the Sharks have never been able to cash in on that promise. They came close in 2016, losing a six-game final series to the Pittsburgh Penguins, but just when it appeared that their window to win a Stanley Cup might be closing, the Sharks acquired two-time Norris Trophy-winning defenseman Erik Karlsson from the Ottawa Senators, vaulting them to status as legitmate contenders in the Western Conference.

Are Leafs Truly Beasts of the East?

The last time Toronto won the Stanley Cup, the NHL had six teams and Bobby Orr was a rookie. Yeah, it's been awhile.

Toronto Maple Leafs (+375) - No team can match the Leafs down the middle with a 1-2-3 punch of Auston Matthews, Tavares and Nazem Kadri at center. But that's a fairly pedestrian defense playing behind them and in front of goalie Frederik Andersen, who wore down from the workload last season. And this franchise hasn't won a playoff series since 2004.

Tampa Bay Lightning (+400) - The Lightning appear to have it all. Victor Hedman won the Norris Trophy and Andrei Vasilevskiy was a Vezina finalist. Nikita Kucherov flirted with the scoring title and Steven Stamkos is also an elite offensive talent. They've been to one Cup final and three conference finals in four years. At some point, their time must arrive.

Pittsburgh Penguins (+550) - After two straight Cups, the Pens took a step back last season, but as long as they have Sidney Crosby and Evgeni Malkin firing on all cylinders, can you ever count them out?

nto, concerns about the back end and goalie Matt Murray, who wasn't nearly as sharp last season as in his two Cup-winning campaigns.

Boston Bruins (+600) - The top line of David Pastrnak (35), Brad Marchand (34) and Patrice Bergeron (30) all scored 30 goals and accounted for 37 percent of all Boston goals. Goalie Tuukka Rask has won the Vezina and captain Zdeno Chara the Norris, but Chara turns 41 this season. And are Marchand's antics of licking and kissing opponents a distraction for the Bruins as much as for the other team?

Washington Capitals (+600) - Three teams since 1980 - the New York Islanders, Edmonton Oilers and the Penguins - won a second Stanley Cup the season after winning their first. The Caps only lost fourth-line center Jay Beagle and back-up goalie Philipp Grubauer from last year's team. But coach Barry Trotz also departed, and replacement Todd Reirden has never been an NHL head coach before.

Does Stanley Know The Way To San Jose?

By adding Karlsson (2011-12, 2014-15) to play along the same blueline as Brent Burns (2016-17), the Sharks are the first NHL team to suit up two Norris Trophy winners since the Anaheim Ducks (Scott Niedermayer, Chris Pronger), who won the 2006-07 Stanley Cup utilizing that tandem.

Nashville Predators (+550) - The Predators may possess the best top four group of defensemen in the NHL. P.K. Subban, Roman Josi, Mattias Ekholm and Ryan Ellis all recorded more than 30 points last season, and both Subban (59) and Josi (53) topped the 50-point barrier. Goalie Pekka Rinne won the Vezina Trophy last season. In 2016-17, the Preds went to the Stanley Cup final. Last season, they won the Presidents Trophy.

Winnipeg Jets (+550) - If you base the decision from the brain and not the heart, this is the Canadian club that is closest to winning a Cup. The Jets went to the conference final last spring. Second in goals (273) and fifth-lowest in goals against (216), Winnipeg was the only NHL team to finish in the top five in both categories. They had five 20-goal scorers, got 31 goals from their defense and Connor Hellebuyck set an NHL record for U.S.-born goalies with 44 wins.

San Jose Sharks (+700) - Even without Karlsson, San Jose's power play was dynamic. The Sharks scored 21 percent of their goals last season (53 of 252) while enjoying the man advantage. San Jose does the little things that create playoff success. The Sharks have won at least 20 road games in each of the past five seasons, they led the NHL in blocked shots over the last three campaigns and allowed a league-low 34 PPG in 2017-18.

Vegas Golden Knights (+600) - After they became  the only first-year expansion team to win a Stanley Cup final game in NHL history, doubt the Golden Knights at your own peril. That being said, the 20-game PED suspension issued to Nate Schmidt, their best defenseman, is a troubling start. Does William Karlsson have another 40-goal season in him? Can goalie Marc-Andre Fleury be that good again?

Vladimir Tarasenko is a lethal finisher and captain Alex Pietranglo a Norris contender. If goalie Jake Allen locates consistency, this team will be dangerous.

Calgary Flames (+1500) - Calgary also revamped off a playoff absence, adding D Noah Hanifin, potent scorers James Neal and Elias Lindholm and new coach Bill Peters. The Flames are an interesting, young team and if the pieces fit together, could contend for the Pacific Division title.