What do these quarterbacks have in common — Andy Dalton, Carson Palmer, Tom Brady, Scott Tolzien and Tom Savage? All five of them were horrible in their season openers and all five of their teams lost by wide margins. Obviously, Brady’s job is secure, but the clock is close to running out on the other four. On the flip side, some impressive efforts were put in by Alex Smith, Matthew Stafford, David Carr, Carson Wentz and Sam Bradford.

Let’s see if they can keep it up in Week 2 (odds provided by bovada.lv).

Not Ready for Prime Time

Houston at Cincinnati — Dalton completed 16-of-31 passes for 170 yards with one, two, three, count ‘em four interceptions. The Bengals did not score a single point at home to open the season. And now they host another team that was an embarrassment at home in Week 1. Savage was so bad, he was replaced by rookie Deshaun Watson to start the second half. The Texans offensive line didn’t help out much, allowing 10 sacks. This game could be very ugly.

Buffalo at Carolina — The Bills beat a bad Jets team at home last week. Now they head on the road to Carolina, which also won against one of the NFL’s doormats in San Francisco. Tyrod Taylor will never take Buffalo deep into the playoffs, but he can keep his team close in this one, especially with LeSean McCoy in the backfield. Rookie Christian McCaffrey touched the ball 18 times for the Panthers last week, taking a lot of pressure off Cam Newton. These two teams haven’t met in four years. 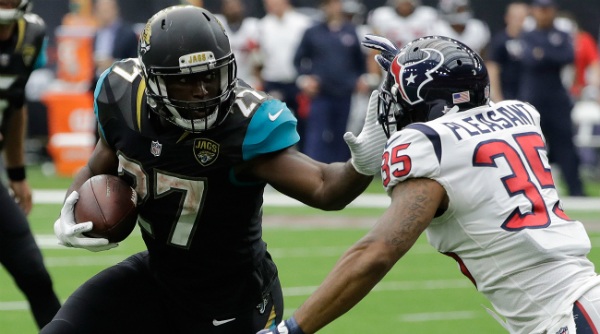 Tennessee at Jacksonville — The last time the Titans played in Jacksonville, their quarterback broke his leg in a lopsided loss. Now, they meet their division rival a year later trying to avoid a 0-2 start. Tennessee had 350 yards in total offense in their opener, but they scored just one TD. Rookie Leonard Fournette gained 100 yards on 26 carries against Houston. He could carry the Jaguars to another win as the home team won both games in the season series last year.

New England at New Orleans — It was a super letdown for the Super Bowl champions. The Patriots, huge favorites in the NFL season opener, looked mediocre all of a sudden. Their defense made Kansas City rookie Kareem Hunt look like a superstar. It wasn’t much better for the Saints, who never threatened to win Monday’s game against Minnesota. Bill Belichick and the Patriots have had 10 days to fix a ton of problems. They will not start the season 0-2 … will they?

Minnesota at Pittsburgh — Antonio Brown was amazing in a Week 1 win over Cleveland. The rest of the team wasn’t. Never mind covering the spread, if the Steelers can’t produce a better effort, the Vikings and their aggressive defense will win this game outright. Minnesota gained 470 yards in total offense in their Monday night victory. Pittsburgh, which has won its last eight regular season games, cannot take this NFC Central opponent lightly.

Watch Out for Kareem Hunt

Philadelphia at Kansas City — If you didn’t know who Kareem Hunt was before the season opener, you do now. The rookie running back made a huge splash on the biggest stage possible in New England. Now, the Chiefs look to go 2-0 in their home opener against a worthy NFC East opponent. The Eagles play their second straight road game after an impressive win over a division rival. Carson Wentz is quickly turning into their franchise quarterback.

Arizona at Indianapolis — Two more teams that offered dismal efforts in Week 1. It’s time for the Cardinals to start planning on their next quarterback because Carson Palmer looks ready for retirement. Worse than that, Arizona lost fantasy star David Johnson to injury. The Colts? Scott Tolzien? No highlights from their opener whatsoever. If Andrew Luck remains sidelined for an extended period of time, the Colts will be lucky to win five games this season.

Bucs Finally Get to Play

Chicago at Tampa Bay — If it wasn’t for many dropped passes near the end of the game, the Bears would have shocked the Atlanta Falcons in their home opener. Chicago also looks to have a special player in rookie Tarik Cohen. But to win on the road, the Bears have to stop making crucial mistakes. Tampa fans will be ready to party after surviving Hurricane Irma and hoping their Bucs have got what it takes to earn a spot in the playoffs this season.

Cleveland at Baltimore — Let’s face it, the Browns have some talent on both sides of the ball. Rookie QB Deshone Kizer passed his first test with flying colors against the Steelers, even though they lost by a field goal. The Ravens won their opener on the road in Cincinnati, partially because the Bengals helped out a lot with five turnovers. Baltimore, which only had 268 yards of total offense in Week 1, now enjoy three straight home games.

New York Jets at Oakland — The Raiders won in Tennessee by 10 points last week. Fourteen seems like a gift in their home opener against the Jets. New York is playing its second straight road game, and they had to travel a lot farther to get to this one. Every win in the AFC West is important as teams jockey for home-field advantage, so Oakland will not take this game lightly. Derek Carr and company should have a big game against a mediocre defense.

Miami at L.A. Chargers — Both teams will be looking for their first wins as the Dolphins game was postponed because of Hurricane Irma, while the Chargers missed a last-second field goal to tie Denver. If Phillip Rivers can play like he did in the second half against the Broncos, Los Angeles will earn a lot of points with their new fans. Jay Cutler gets his first start with his new team. Hopefully, he’s a lot better than he was in Chicago.

San Francisco at Seattle — Both the 49ers and Seahawks failed to score a touchdown in their season openers. That changes in this game, at least for one of them. San Francisco looks like they’re headed for a long season. Seattle is still the prohibitive favorite to win the NFC West. They will generate more than the 225 yards of offense they produced in Week 1. If Carolina can beat the 49ers by 20 points in San Fran, the Seahawks should have no problem covering with the help of the 12th man.

Dallas at Denver — The Cowboys scored an impressive win over the New York Giants, but what stood out the most wasn’t their Big Three in Prescott, Elliott and Bryant. The Dallas defense was phenomenal, holding the Giants to just three points and 233 yards of total offense. Denver is not an easy place to win on the road, but the Cowboys have more than enough firepower to shut down Trevor Siemien and the Broncos. If Elliott is eligible to play all season, Dallas is the team to beat in the NFC.

Washington at L.A. Rams — All aboard the Rams bandwagon. Los Angeles coach Sean McVay faces his former team, who clearly seemed to miss him last week as the offense looked lost. Now, the Rams aren’t headed to the Super Bowl or even a division title, but they have certainly improved across the board. The Redskins were clearly outplayed in their home opener. They now have to travel across the country to face a team full of confidence.

Green Bay at Atlanta — The last time the Packers traveled to Atlanta was eight months ago. They would rather forget the trip and the result as the Falcons trounced Green Bay 44-21 in the NFC title game. Have things changed that much since Matt Ryan had his way with the Green Bay defense? Not really, except for the fact this is the first game in the new Mercedes-Benz Stadium. Will the Packers and Aaron Rodgers ruin the party? Not without a running game.

Detroit at New York Giants — The Lions look to go 2-0 with their first road win of the season. The Giants look to avoid 0-2 with their first game at home. Detroit, still without much of a running game, will again rely on franchise quarterback Matthew Stafford to get the job done through the air. New York, which obviously misses Odell Beckham, stumbled out of the gate with just over 200 yards in total offense. This is a must-win game for the Giants as they hit the road for two straight weeks after this one.

If you're looking to play your favorite team straight up or against the spread, these providers will have you more than covered. Don't forget to check out the prop bets. They could add significantly to your bankroll if you can pick a winner.