Dead and buried, following their 1-7 start, Detroit regrouped during their bye week and the Lions have now recorded two straight wins. While we still can’t figure out how Detroit posted an 18-16 road win versus the Packers in Week 10, the Cats were full marks for their 18-13 home victory over Oakland last week. Even if win out to finish 9-6, lagging behind eight teams in the NFC Wild Card race means the Lions are toast. Seeming as though they were going to make a playoff push, following a 3-1 recent run, Philadelphia fell flat during a pair of home losses to Miami (20-19) and Tampa Bay (45-17) over the last two weeks. Through it all, the Eagles are just one win behind the Giants in the NFC East playoff race.

Though not studded with wins versus “quality” teams, the Panthers opponents have a 45-55 record including the Packers 7-3 mark, Carolina is full marks for their perfect record. The Cats are a solid mix of smash-mouth defense that’s kept fresh by a power-run offense. QB Cam Newton is blossoming into a true field general, certain celebrations aside, and he has joined Tom Brady and Carson Palmer in the NFL MVP conversation. The return of QB Tony Romo helped during a 24-14 win over the Dolphins as Dallas (3-7) snapped a seven-game losing streak last weekend. While the victory is encouraging, the Cowboys path to the playoffs is very steep - if not already nothing more than a pipe dream.

Lopsided recently, in favor of Green Bay, the Packers host the Chicago Bears for the 192nd time as this storied NFL rivalry battle closes out the Thanksgiving Day feast. The Packers ended a three-game losing skid with a rock solid 30-13 win over the Vikings in Minnesota last Sunday. During their slide the Packs leading rusher posted 38, 39, and 42 yards. Mysteriously shuffling in and out of the lineup, RB Eddie Lacy reappeared and posted 100 yards while Green Bay held the NFL’s leading rusher Adrian Peterson to just 45 yards. Green Bay still has flaws but they are a Super Bowl contender. Following a pair of wins on the road, 22-19 in San Diego and 37-13 in St. Louis, Chicago fell 17-15 in Denver last week and their 4-6 record has the Bears three losses back in the NFC North Division.

NFL Week 12 Thanksgiving Day Call: Since the NFL went to a three-game Thanksgiving Day format in 2006, the three home teams have completed a sweep just once as the Lions, Cowboys and Ravens all won in 2013. Though they have won back-to-back games, and they were the lone home winner last year, the Lions are largely responsible for the lack of sweeps. The Motor City Kittens went 0-7 during the first seven years while the other two home teams both won on four occasions during that span. Since all six teams are playing on three days rest – the “hotter” teams do get an edge here. Teams playing well need less preparation time while teams not playing well try to slap on as many fixes as they can – that in itself can lead to more problems. Give us the Lions, Panthers and Packers with a 300 unit parlay bet on the money line prices listed at the Sportsbook.ag online wagering website.

Packers vs Bears Pregame Update: With a pair of Cats in the bag, we've backed up our parlay with a 200 unit wager on the Bears -320 updated money line. This sets up a gauranteed winner as we bank +732.28 units with a Green Bay win and +340 units if Chicago pulls the upset. Being a Better Bettor, by following this scenario, is better than a +932.28 win or a -300 unit loss if the Packers lose. 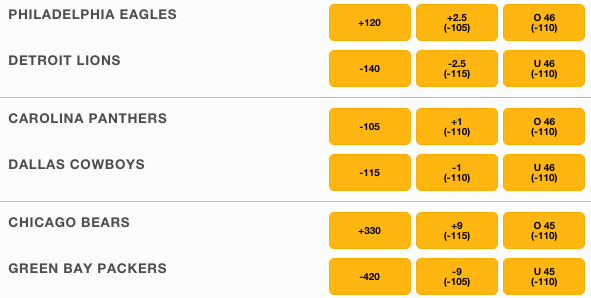