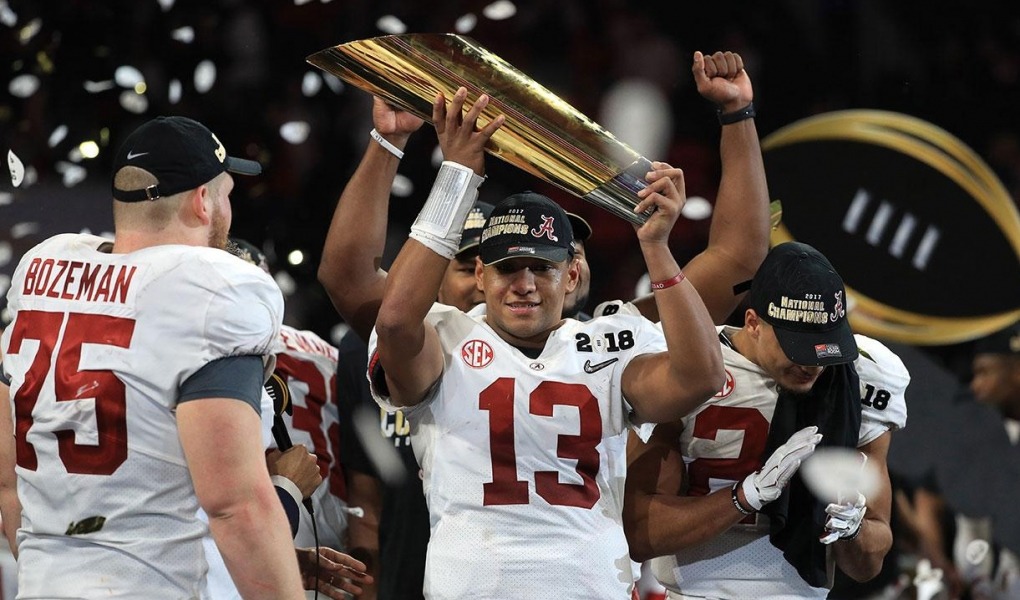 If you’re looking for the best college football odds — not only for the CFP, but the rest of the bowl season — Bovada has you covered. But before you lock in your wagers, check out our college football picks below!

The Heisman race looms large in this matchup. Of course, Kyler Murray of the Sooners won the prestigious trophy after rolling up almost 5,000 yards of total offense and 51 touchdowns this season. The runner-up was the Tide’s Tua Tagovailoa, who received the most points ever for a second-place finish.

We’re in the camp that believes Tagovailoa was robbed — and so do his teammates. The sophomore accounted for 42 touchdowns and just four interceptions, which at first glance, seems small compared to Murray. The difference is Tagovailoa played in 210 less snaps than Murray, thanks to Alabama building large leads that kept Tagovailoa on the bench in most fourth quarters.

Moreover, there’s something to be said about the caliber of opponents both played. Playing out of the vaunted SEC, the Tide beat five teams currently ranked in the Top 25. The Sooners went 2-1 against the same group.

We expect Alabama to absolutely roll in this one. On one hand, Tagovailoa will feast on an Oklahoma defense that’s ranked 96th in the nation in scoring (giving up 32.4 points per game). Two, Alabama’s defense will use its sheer size to beat up Murray, who isn’t even six feet tall and bound for an MLB career anyway. In the end, Tagovailoa will get the last laugh over Murray.

Akin to the Orange Bowl, the Cotton Bowl features two signal callers in similar paths. Though, their road wasn’t paved until late September. Neither Trevor Lawrence of the Tigers or the Irish’s Ian Book began the season under center for their respective teams. Yet here they are, both undefeated and two games away from college football immortality.

This game should be a lot closer than the spread indicates. Both teams had three common opponents in 2018 — Florida State, Syracuse, and Wake Forest. Neither of the three are particularly good, but both Clemson and Notre Dame played them about the same. The Tigers won their games on average 50-12, while the Irish were in the same range, winning by a 45-14 average.

We expect Clemson to win, setting up a fourth straight Clemson-Alabama postseason battle. However, Notre Dame will fight them tooth and nail. Most want to discredit the Irish’s schedule, but its victory over Michigan still carries more weight than Clemson’s signature win versus Texas A&M. Notre Dame getting 13 points is pure value.

If you’re looking for a go-to online sportsbook, check out some of the top-rated ones below. Remember that you can bet on all college football scores.

Clemson versus Alabama in the CFP Final feels like a foregone conclusion so you might as well lay money on the future odds right now. Bovada is giving Bama -200 to win it all, while Clemson is getting +280.

If the first three games between these two taught us anything, it is that it will take an electric playmaker to keep Saban from winning another national title.

That playmaker will have to be in the mold of Deshaun Watson — which isn’t exactly easy to replicate. We saw that in last year’s Sugar Bowl, which the Tide won handily 24-6. Watson’s heir apparent Kelly Bryant was an absolute disaster in that game. It probably comes as no surprise Bryant was replaced by Lawrence earlier this year and has since transferred to Mizzou.

Lawrence should fare better than Bryant, but in the same token, Tagovailoa is a clear upgrade over Jalen Hurts, who started the past two games for Alabama against Clemson. Saban has never had a game-changing quarterback during his reign of terror in Tuscaloosa until now. You’d be crazy to not lay some money on the Tide.