So close and yet so far. That was the mantra for the John Calipari led Kentucky Wildcats last year as they dropped a 60-54 decision to the Connecticut Huskies in the 2014 NCAAB Championship. Kentucky has not lost a game since though as they rolled through their regular season with a perfect 34-0 record. The Wildcats entered last year’s tournament as a #8 seed – this year they own the top overall slot. If they don’t let all the “Perfect Season” chatter cloud their collective minds – the Cats have a solid shot at attending the Final Dance at Lucas Oil Stadium on April 6, 2015.

Villanova, Duke and Wisconsin positioned as the other three #1 seeds

Villanova went 32-2 overall (16-2 Big East) and the Wildcats blew out Xavier 69-52 in the Big East Championship game. Always a powerhouse, Duke posted a 29-4 record (15-3 ACC) but the Blue Devils lost 74-64 to Notre Dame in the semifinal of the ACC Championship. Wisconsin, who may have to knock off Kentucky to earn a title game shot, was 31-3 overall (16-2 Big Ten) and the Badgers mauled Michigan State 80-69 to claim the Big Ten Title. We like what Wisconsin brings to the Dance.

March Madness Championship Prediction: Bucking the NCAAB official rankings, TopBet bookmakers have moved Wisconsin into the #2 overall seed while Duke retains the #3 seed and Villanova drops down to the #4 seed. While one has to respect Kentucky, Wisconsin deserves their due as well. The Badgers were first in the Nation with a ridiculously low 12% turnover rate this season. Although they have been playing a more up tempo on offense this season, Wisconsin certainly knows how to milk the 35-second clock as well. We are backing the Badgers with a 200 unit wager at on the NCAA March Madness Championship odds posted on the big board at the TopBet sportsbook. 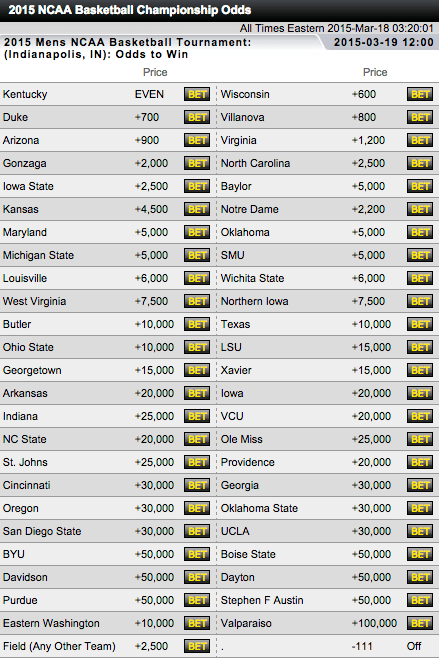