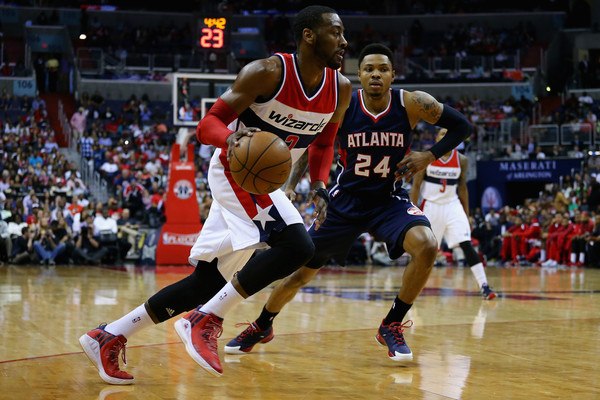 The Washington Wizards are clearly the more balanced of these two teams, which bodes well for them over the course of the series. But the Atlanta Hawks played the Wizard tight during three of their four regular season matchups, and their defense is just brutal enough to gum up John Wall's pick-and-roll initiations.

Complicated still, the Wizards' starting lineup, the most used five-man unit in the league this season, has been getting torched during that time. They are scoring enough offense to get by, but they are also posting what would be a league-worst defensive rating by a mile en route to getting clobbered by 7.4 points per 100 possessions.

But wait, it gets worse.

The Wizards will be without Ian Mahinmi to start this series, and there's no guarantee they get him back at all. They are already wafer thin defensively on the bench, and his absence increases the already demonstratively heavy burden placed upon the starters.

All this adds up to the Hawks having an opportunity for an offensive breakout without having to compromise their defense. They may not steal Game 1 on the road, but they should be able to keep it close wire-to-wire.

Let's get one thing absolutely clear: The Portland Trail Blazers aren't winning this series, and they aren't stealing Game 1. The Golden State Warriors are firing on all cylinders at the moment, and Kevin Durant's return from a sprained MCL hasn't slowed them down one bit.

In the four games these two teams played during the regular season, the Warriors won by an average of 12 points, which essentially amounts to two blowouts and two tightly contested affairs. It's always hard to get a read on certain things in Game 1 of a playoff series, particularly during the first round. The Warriors are at home, where they remain nearly impossible to beat, but a 14.5-spread is monstrous against a team like the Blazers that generates a ton of offense from beyond the arc.

For Game 1, we're going to roll with the Blazers. The Warriors might be pressing a little bit in their first playoff appearance with Durant in the fold, and the Blazers closed the regular season playing like one of the five best teams in the league. That's enough for us to bet on this being something other than a blowout in favor of Golden State.

Isaiah Thomas' sister died in a car crash on Saturday, a tragedy that's far bigger than any basketball game. Still, his loss stands to have an impact on this game. He's expected to play, but there's no telling how locked in he'll be with all this real-life stuff going on. That, in theory, could open a window of opportunity for the Chicago Bulls.

People tend to forget just how deep the Boston Celtics are. They may struggle to score when Thomas isn't on the court or playing at his peak, but they have a ton of defense-first lineups that they can turn to. Many of their small-ball combinations have also been tearing things up since the All-Star break.

Expect the Celtics to send a message in Game 1. There are those who don't think them worthy of the Eastern Conference's No. 1 seed, and while they cannot be expected to fend off the Cleveland Cavaliers in the long run, they have the chops at full strength, as they are now, to take down a topsy-turvy team like Chicago.

MVP candidate meets MVP candidate when the Houston Rockets play host to the Oklahoma City Thunder in the first game of Round 1, and we have every reason to expect this will be a doozy.

James Harden's Rockets won the season series against Russell Westbrook's Thunder 3-1, but only one of those proceedings was decided by double digits. Oklahoma City has been playing better on offense when Westbrook is in the game, while Houston's three-point shooting hasn't been as efficient.

The Rockets still need to be the heavy favorites in this series, but nearly every single game figures to be close. Seven points is a little too much for our tastes.