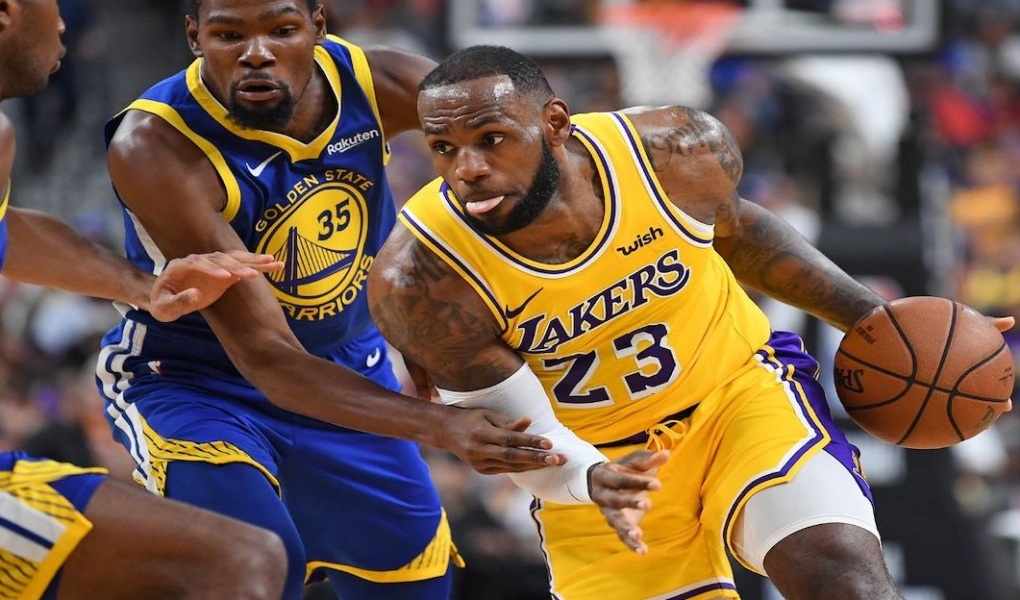 Just as the NFL has Thanksgiving, the NBA has Christmas Day, and this year’s slate of games is a humdinger.

First we have Giannis Antetokounmpo and the Bucks taking on the Knicks. Then it’s Rockets against the Thunder. Up next, it’s Kyrie Irving’s Celtics versus the 76ers. After that, we have LeBron James and the Lakers taking on the reigning NBA Finals champion Warriors. And finally, we close with a Northwest Division sparring between the Jazz and the Blazers. Let’s go over everything we need to know in advance of placing our bets.

If you think about it, this really shouldn’t be a Christmas Day matchup. The NBA is supposed to give us premier teams and marquee stars. But the Knicks are bad, and their lone superstar, Kristaps Porzingis, is still injured.

Expect the Bucks to cruise into the win column. They’re itching for revenge after dropping an early-December game in overtime to these Knicks.

Giannis Antetokounmpo has upped his MVP credentials ever since, and Milwaukee as a team is playing some of its best basketball. They’re currently the only squad in the league that ranks in the top five of both offensive and defensive efficiency. They should dominate in their first-ever Christmas Day cameo.

Oh, and please be sure to note the 12 p.m. ET tipoff. You’ll need to get your bets in early—preferably on Christmas Eve.

Both the Rockets and Thunder are playing top-notch basketball at the moment.

Oklahoma City continues to boast the league’s best defense and is led by Paul George, an MVP candidate, and Russell Westbrook, who has never been more versatile at either end of the court.

Houston, meanwhile, is on a tear since stumbling out of the gate. They have not lost since December 8, during which time they’re sporting the league’s best offense by points scored per possession.

James Harden is yet again playing out of his mind for the Rockets. And still, that probably won’t be enough. Chris Paul is struggling, while Oklahoma City is getting the best from its two stars, along with a career year from Steven Adams.

This should be a good one. Both the Celtics and Sixers are trying to rebound from slumps, though their poor play has come at different times.

Boston began the season as a dud. Over the past month or so, however, they have the NBA’s top offensive rating and point differential by a mile—not to mention a top-five defense to boot.

Despite the Celtics recent losing streak, the Sixers are struggling more. Their top-heavy roster headlined by Ben Simmons, Joel Embiid and Jimmy Butler is feeling the lack of depth. Their exhaustion is beginning to impact their defense, which ranks just 16th in points allowed per possession since the November acquisition of Butler.

While this is being billed as the Christmas Day showcase, it may not be the best matchup on the docket.

Yes, any LeBron James game is an event. But the Lakers are going through the motions right now. They don’t have an identity, and Brandon Ingram, one of their three leading scorers, remains injured.

On the flip side, the Warriors have more star power than anyone in the NBA with Stephen Curry, Kevin Durant, Klay Thompson and Draymond Green. If everybody plays, view them as heavy favorites.

Of course, you may want to steer clear of their spread. Their Christmas Day record ATS isn’t great, and they’re covering just 43.8 percent of their spreads for the season—a bottom-six mark.

Don’t sleep on the importance of this matchup. Both the Jazz and Blazers are hovering on the fringes of the West’s playoff picture, and with so many teams chasing a postseason berth, every win counts.

Neither squad is playing particularly consistent basketball. The Blazers defense has collapsed over the past month and a half, while the Jazz are still trying to figure out their half-court offense, which ranks in the bottom 10 of points scored per possession.

At the end of the day, we tilt toward the Jazz. They haven’t been dominant while playing at home in Utah, but Portland is worse when playing on the road. They’re 6-9 in hostile territory, with a bottom-10 point differential.

Check out this list of the top online sportsbooks so you can pick the one that’s best for you: