Fourteen of the 16 playoff spots have been secured. The last two positions are being battled out between Indiana, Chicago, and Miami. That scenario is what makes this matchup a must-bet.

With a win, Indiana (40-40) is in the postseason, regardless of what else happens. For all intents and purposes, this is a playoff-esque game for the Pacers. The stakes are high, but Indiana has consistently risen to the occasion. They've won three in a row, cruising to victory with 18, 15, and 15 point wins. A six-and-a-half point spread is more than manageable here.

It helps they're playing against Philadelphia (28-52). Make no mistake about it, the 76ers are in tank mode. Despite being one of the best against-the-spread bets all year long, the Sixers have faltered in their last six games, covering just once during that span. Things will stay the same on Monday as Indiana pounds them.

The Palace of Auburn Hills has been the Pistons home since 1988. It's housed iconic teams like the Bad Boy Pistons and unforgetable moments like Ron Artest brawl with fans. On Monday, the franchise — along with great players of the past — will bode farewell to the storied arena before their new building opens downtown later this year. As you can imagine, emotions will be running high.

It's been a disapointing campaign for the Pistons (37-43), but a win here would be huge. On the opposite end, the Wizards (48-32) would love to spoil the celebration and use the hostile environment that awaits them as preparation for the playoffs.

The thing is, this game is all but meaningless to Washington. After a close loss to Miami two nights ago, they are locked into the fourth seed. All they can do now is wait to see who their first-round opponent will be. The Wizards may opt to rest players.

Either way, the Pistons are going to come out firing as they attempt to end their time at the Palace with a bang. Riding those emotions, Detroit will cover. 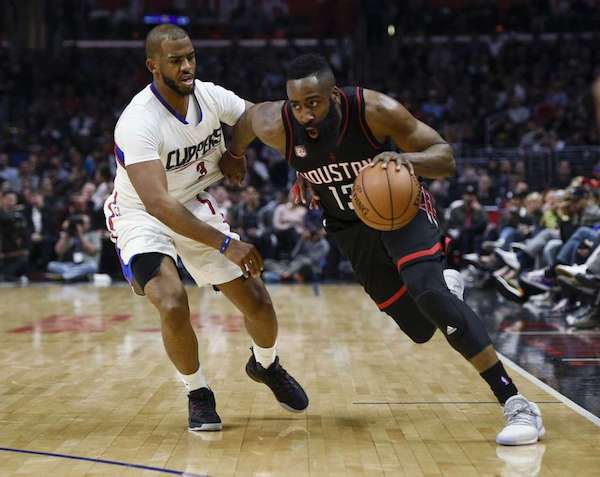 This may be the greatest MVP race in NBA history. This weekend, Oklahoma City's Russell Westbrook punctuated his MVP case by securing his NBA-record 42nd triple-double of the season, guaranteeing he'll become the league's second player ever to finish the year averaging a triple-double.

He was quoted as saying "winning is what this is about — period." A win here for Houston (54-26) doesn't mean much, they'll end up as the three seed regardless. But a victory would help Harden's MVP case greatly, which is plenty of motivation. Expect the Rockets to come out scoring, and the Clippers (49-31) will do their part, too.