Columbus Crew come into this game on the back of a five-game winless streak, only marginally worse than Toronto's two wins out of the last four. Crew have largely been disappointing since losing Kei Kamara to New England Revolution, but in this latest Trillium Cup game will be hoping home advantage pays. With Toronto currently in fifth place in the Eastern Conference, they will take on ninth-placed Crew hoping to climb into third should other results go their way.

Our tip: We think Toronto can take advantage of their current impetus and grab a late win. They're +600 to be tying at half-time but triumphant by the final whistle.

After recent defeats to Real Salt Lake and their bitter rivals from across town, New York City FC, Red Bulls need a win. They have slipped to fourth in the Eastern Conference and are without a win in four, with just a handful of points keeping them in the playoff positions.

The pressure is on, and especially against Orlando, with City having won and tied the last two meetings between the teams. Red Bulls will be under pressure from the off and we think that will inspire top scorer Bradley Wright-Phillips (below). 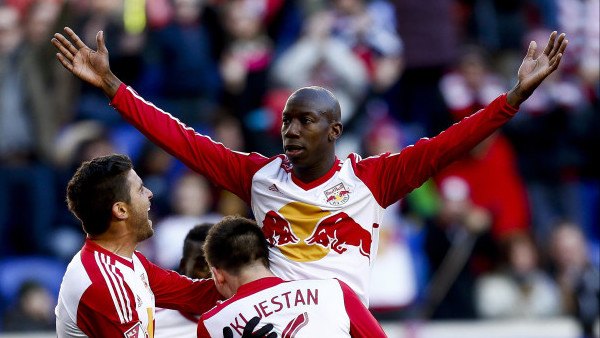 Two sides with disparate form meet in a clash between opposite conferences. Chicago Fire have been wretched, with just one win in five, while Sporting KC visit the Windy City with two wins in four unbeaten games.

They triumphed in emphatic style at the weekend, too, beating much-fancied New York City 3-1. With Dominic Dwyer their top scorer on a massive eight goals, Sporting KC have risen to fifth in the Western Conference and one win would put them third. We think they can get that against the bottom side in the Eastern Conference. KC have a strong record and have won the last two meetings between these sides without conceding. Fire will be extinguished.

Seattle Sounders have been a big disappointment in the MLS so far this season. While they sit bottom of the Western Conference, FC Dallas sit at the other end of the table, in top position. Seattle, however, have often found heroes when they need them, and in Clint Dempsey have a player who can come up with something special out of nothing:

Our tip: Both sides have renowned strikers and despite Dallas being in much better form, we think Sounders will fight tooth and nail to deny their guests the win.

Both Portland and Montreal are on serious streaks, with the hosts unbeaten in seven and Impact holding firm in five. Both have big scorers in Fanendo Adi (ten for Timbers) and Ignacio Piatti (nine for Impact) and we think both will extend their unbeaten runs.

Our tip: Take the 1-1 tie at +525. Here's what happened last year when the two sides met in a pulsating game:

Vancouver are a strong home side, but Real are a genuine threat and sit four points ahead of the home side. We think they'll be able to preserve that four point gap.