Conor McGregor (21-3 MMA, 9-1 UFC) and Floyd Mayweather (49-0 boxing) face off on Saturday, Aug. 26 in a pay-per-view event expected to be the most lucrative prize fight of all time. BetOnline oddsmakers have posted the line at five million pay-per-views, even with the cost at $100 per user. That’s $500 million in pay-per-view revenues alone.

McGregor, 29, will enter a boxing ring for the first time as a professional when he takes on the 40-year-old Mayweather, who is coming out of retirement for an event that promises to make both fighters tens of millions of dollars... Matt Damon, Angelina Jolie, Tom Brady, LeBron James and Kobe Bryant are among those expected to walk the red carpet.

But what about the President of the United States? And how many times does President Trump plan to tweet on the day of the main event? (Odds provided by BetOnline).

It’s no secret that Trump is close friends with UFC president Dana White, having hosted UFC events at his Atlantic City property in the sports organization’s early days.

White was a strong supporter of Trump during the presidential campaign, even taking the stage at the Republican National Convention last year. Before the President decided to enter the political arena, Trump and his wife Melania sat ringside at the last marquee fight in Las Vegas where Mayweather beat Manny Pacquiao in April 2015 at the MGM Grand Garden Arena.

White has admitted that Trump has expressed an interest in attending this weekend’s fight. But there’s only one problem: White says that Trump is hesitant to attend because he thinks he will ruin the party atmosphere, what with the Secret Service and all. That seems like an odd excuse, though, because Vegas is a party every day of the year.

Getting the support of @DanaWhite of UFC means a lot. A total winner, who has done an amazing job. Just ordered his fight to watch tonight!

If anyone changes their mind and does decide to go, it shouldn’t be a problem getting a room on the Strip or a ticket to the fight. The event has yet to sell out, despite the wild interest on social media. Many are saying the demand for tickets has fallen far short of the interest in Mayweather's fight with Pacquiao. The cheapest available ticket to watch this weekend's fight is currently $1,300, which is far less than prices quoted months ago.

And the price for rooms in Vegas have been lowered two or three times because of lack of demand. A room at Caesars Palace for a three-night stay averages $242 a night, according to a popular online travel website. Or grab a room at Monte Carlo, which is right beside the new arena. It averages $141 a night. Let the party begin! 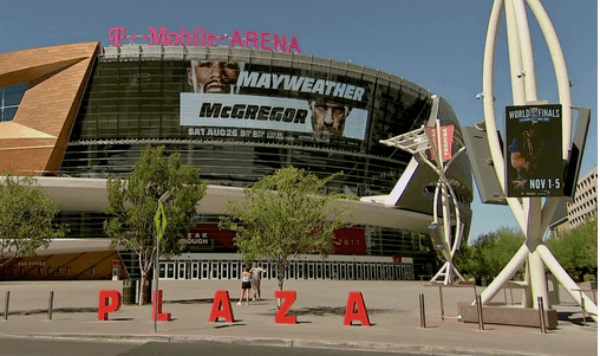 BABB’s pick — @realDonaldTrump has made more than 35,600 tweets to his 36 million followers. He seems to average around 10 posts a day recently. With all the attention of this social media spectacle, Trump will make his presence known whether he attends the fight or not. Take the over.