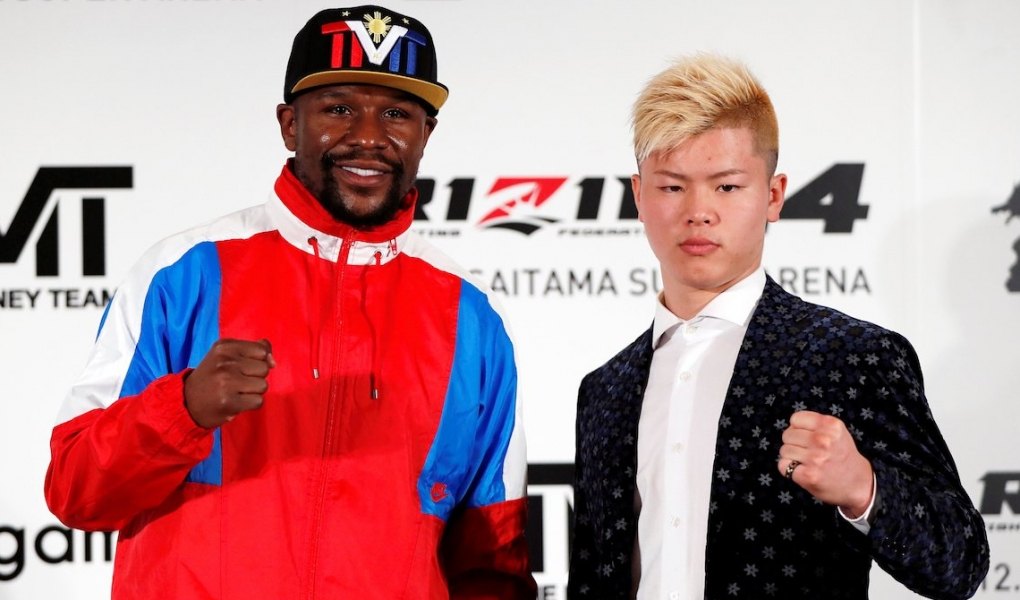 It’s been a weird few months for the semi-retired Mayweather. He’s teased a rematch with Manny Pacquiao and showdown with the best pound-for-pound MMA fighter Khabib Nurmagomedov within weeks of each other.

Then came an official announcement that Mayweather would instead battle Nasukawa of Japan’s famed Rizin Fighting Federation on New Year’s Eve. This was even accompanied by a press conference with both fighters present in Tokyo.

It took all of three days before Mayweather called off the fight via a lengthy Instagram post. The 50-0 boxer put blame on the Rizin promotion, saying the agreement was for a private exhibition — not a pay-per-view matchup.

It’s been a bizarre turn of events, however, that hasn’t stopped Bovada from posting fight odds. Mayweather is pegged -270 to win, while Nasukawa is +200. We know Mayweather’s not one to leave money or attention up for grabs, so there’s a chance the bout still happens. If it does, here’s what you need to know:

Who is Tenshin Nasukawa?

Unless you’re familiar with Japan or kickboxing, the name Tenshin Nasukawa doesn’t mean much to you. However, it should if you’re even thinking about laying down some money.

Simply put, Nasukawa is a kickboxing phenom. Like Mayweather, he’s undefeated in his sport (s). He’s 27-0 at kickboxing, with 20 of those wins coming via stoppage. Nasukawa also holds a 4-0 mark in mixed martial arts. Before his pro fight career, he racked up 99 amateur wins, too. And get this, Nasukawa is just 20 years old — born just two months before Mayweather claimed his first-ever boxing championship.

Fight records and titles don’t do Nasukawa justice, though. Instead, take peek below at his highlight reel, which showcases his dynamic fight style in full.

As you can see, Nasukawa is the textbook definition of explosive. Whether it’s via hands or feet, his strikes come in flurries and packed with power. With a background in karate and Muy Thai, Nasukawa is a well-rounded fighter that can attack in more ways than one.

Mayweather vs. Nasukawa: Making The Pick

Simply put, the winner of this matchup really depends on the agreed fight rules.

If it’s a no-holds-barred MMA bout, which Rizin is contested under, then there’s no question Nasukawa would mop the floor with Mayweather. Matter of fact, it would end in a quick knockout. For all of Mayweather’s defensive prowess, guarding against kicks, takedowns, and elbows is an entirely different challenge. Let’s just say a shoulder roll isn’t very effective against a roundhouse kick.

Perhaps that’s why Mayweather put the brakes on this fight. He realized a beatdown in Rizin rules wasn’t worth tainting his legacy — no matter the payday.

After all, this is Mayweather we’re talking about. He’s the ultimate opportunist and has made a lucrative career out of doing fights his way. He lured Connor McGregor into a boxing match, not an MMA fight. He dodged Pacquiao for years until the boxer was worn-out. He also took advantage of a before-his-prime Canelo Alvarez. Things aren’t about to change all of a sudden.

If this fight happens, bet Mayweather. He’ll curb the rules in his favor like he always does. Likewise, he’ll come out victorious like he’s done his entire career. Make it 51-0 for Money Mayweather.