Before we jump into our predictions, it's important to note not every game is worth your dollar. Betting Duke to cover 18-and-a-half points over Troy is more about luck — and garbage time hero — than actual skill. Instead, here are three games that actually have bettors thinking twice.

Only three first-round matchups have a spread closer than this one, so expect a barn burner. There's so many variables at play when evaluating a game, but recent streaks may be the most crucial.

The Terrapins have shown flashes of greatness, including a 20-2 start against a mediocre schedule. However, this team is trending downward and has lost four of the last six. Confidence is nearly as shook for the Musketeers, who stunned Butler — a No. 4 seed — in the conference tournament.

Both teams are carried by potent guards. For Maryland, it's junior Melo Trimble. He sets the table for the Terps with 17 points a game. When he's on, the team's other sharpshooters feast. Xavier is keyed by junior Trevon Bluiett, who is averaging 18.1 points per contest. At 6-foot-6 and nearly 200 pounds, Bluiett is a clear mismatch for most teams.

It'll be a back-and-forth affair with an abundance of points. However, the Musketeers will live up to their preseason No. 7 ranking and get the edge. 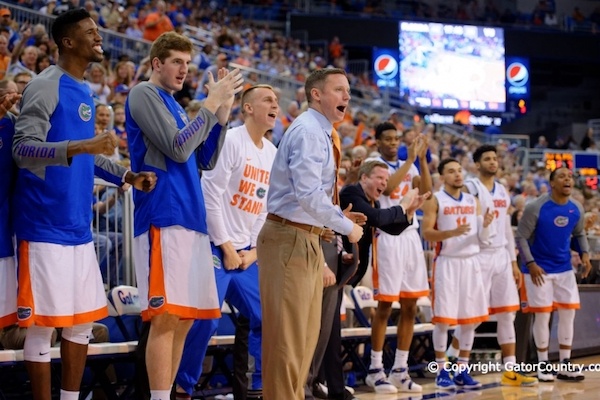 If not for losing starting center John Egbunu to a torn ACL, Florida may have been a good national champion pick. But without the big man in the lineup, the Gators haven't looked nearly the same, losing three of the last four. Florida's slump has lead many to pencil this game as a possibly upset. Pump the brakes on that.

The matchup will take place in Orlando, just a two-hour drive from Gainesville. Expect Gator Nation to be out in full force, as this will be a pseudo home game for Florida. Moreover, the team's recent downswing is being overblown. They lost on the road to Kentucky, followed by two losses to Vanderbilt in Nashville. Both those teams are dancing as a No. 2 and No. 8 seed, respectively, so what's the shame in road losses to them?

Matter of fact, all of Florida's eight losses have came against tournament-bound teams. They are battle tested, ranking in the top-10 nationally in RPI and strength of schedule. The hardened Gators will be able to handle inexperienced East Tennessee State, who are dancing for the first time since 2010.

We talked about peaking at the right time and few are riding a bigger high than Michigan. The Wolverines won the highly-contest Big 12 tournament after topping NCAA Tournament foes like Purdue, Minnesota, and Wisconsin. They'll try to continue their winning ways against a perseverant Oklahoma State team which dropped its first six conference games, before rolling up wins in 10 of the last 14.

Expect an offensive flurry in this battle. The Cowboys enter with the eighth most points per game (85.5) in the country, while the Wolverines averaged 76 points a game during their conference tournament run.

The problem is Michigan lives and dies by the three-point shot with a whopping 24.6 attempts per game. They're unstoppable if the shots are going down, but that's a big if. Even if the Wolverines are having a mediocre shooting night, Oklahoma State has enough offensive firepower to take advantage.