Sure, both are No. 1 seeds, but neither of their path to this championship game was without struggle. Gonzaga (37-1) carried the weight of previous Bulldog letdowns in March Madness to reach their first-ever NCAA championship game.

For North Carolina (32-7) it's been a year-long redemption tour after losing last year's national title game at the buzzer.

Much is being made of these two programs history. The Bulldogs for their Cinderella past and the Tar Heels for their familiarity with this stage.

North Carolina are appearing in their NCAA-record 20th Final Four and 11th championship. But a quick glance at the tale of the tape reveals there's a razor thin difference between both teams.

Perhaps the biggest matchup — and boy, we mean biggest — that'll swing this game on way or the other is down low. It'll be a war between Gonzaga's 7-foot-1, 300-pound Przemek Karnowski and North Carolina's 6-foot-10 and 260-pound Kennedy Meeks.

Karnowski, a senior, is the grizzled veteran on a mostly young roster. Meanwhile, Meeks is the energizer bunny of the Tar Heels, and is fresh off a 25-point and 14-rebound performance in the Final Four.

The difference here is Karnowski won't be alone. The Zags have another seven-footer in freshman Zach Collins. He's a serious threat to be a one-and-done player after this game and likely become a first-round pick.

Collins dominated in the previous game, dropping 14 points, along with 13 boards and a whopping six blocks. Meeks is a machine, but he's no match for the Bulldogs dynamic duo.

The second matchup to keep your eyes on is in the backcourt. Gonzaga is led by Nigel Williams-Goss, who leads the team with 16.9 points per game. He's the floor general on an offense that makes 50.8 percent of their shots — the second most efficient shooting team in the nation. Altogether, the offense averaged 83.1 points per contest, which ranked 15th in the NCAA.

North Carolina's offense is fueled by Justin Jackson, the AAC Player of the Year. The sharpshooting Jackson has drilled a school-record 105 three-pointers this year. However, he's playing his best now. During the NCAA Tournament, he's averaging 20.2 points per game, including a clutch 22-point outing in the semifinals. 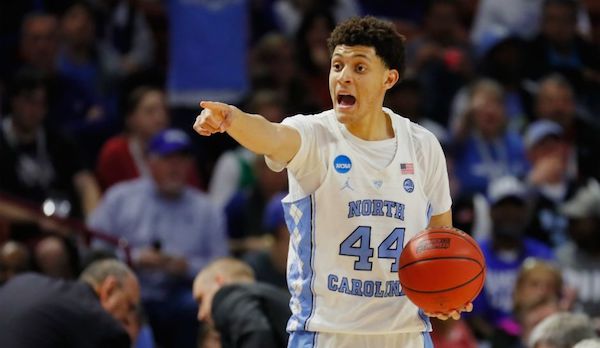 All in all, the Tar Heels averaged 84.8 points per game on the season, good enough for 12th in the country. They do much of their damage on second-chance opportunities as they led the country in offensive rebounds.

In a game so evenly matched, it might be useful to weigh in experience. In the national semifinal against South Carolina, only two Gonzaga players that logged minutes also appeared for the Bulldogs last year. That's a stark difference to North Carolina, which features a starting lineup that all played in last year's championship game.

However, we're not buying into experience too much. Look, there's a lot going against Gonzaga cutting down the nets. On one hand, a non-power conference team not named Kansas hasn't won it all since UNLV in 1990. Moreover, a one-loss team hasn't won the NCAA Tournament since North Carolina State pulled off the feat in 1974.

Both those stats will become nothing more than history on Monday as the Bulldogs pull off the (minor) upset as the Zags advantage in the frontcourt will de the difference maker.

I say minor upset because many are making this out to be David vs. Goliath. That's just not the case as the Zags have dominated this entire season and it finally culminates on Monday with a close victory.