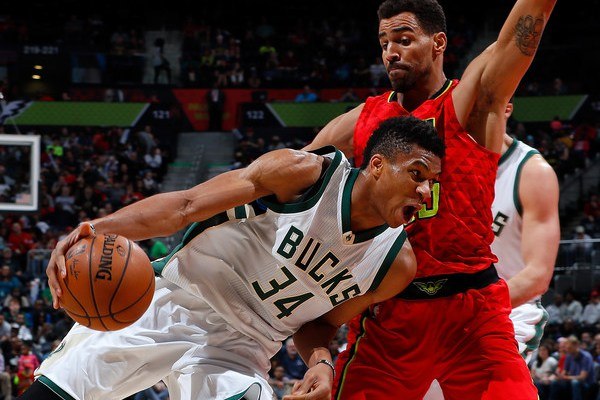 The Milwaukee Bucks' slogan is "Own The Future," but really, they've been owning the month of March. They are 10-3, with a tidy 4-2 record on the road, posting top-10 offensive and defensive ratings. They're 5-1 at home, where this one will be played, and in recent weeks, they have found a way to win close games—a struggle of theirs through the first 75 percent of the season.

Putting this squad up against an Atlanta Hawks team that won't have Paul Millsap or Kent Bazemore is almost unfair. The Hawks hung around without them against the Washington Wizards this week, but they ultimately bent.

With the Bucks now vying for the Hawks' playoff spot—the Eastern Conference's five-seed—this is a game they should win.

LeBron James wasn't happy following the Cleveland Cavaliers' Wednesday night loss to the Denver Nuggets. His crew now has the second worst defense, in terms of points allowed per 100 possessions, since the All-Star break.

Shoddy defense shouldn't stop them from coming out of the Eastern Conference during the playoffs, but it's something that could cripple their championship chase. They've been injured, but a lack of continuity isn't an excuse for a lack of effort.

All of which is to say we should expect a better effort from the Cavaliers on Friday night. The Charlotte Hornets are only now just working out of a months-long malaise, and they don't have the offensive creativity necessary to truly capitalize on Cleveland's turnstile.

Don't look now, but the Brooklyn Nets are coming. They absolutely flattened the Phoenix Suns on Thursday night, winning back-to-back games for the first time this season, and they've taken Ws in three of their last five competitions.

The Washington Wizards are still vying for top-two placement in the East while fending off the fourth-place Toronto Raptors. They have something to play for. But the defense has slipped of late, and they looked awful for the first half of a game against the Paul Millsap-less Hawks on Wednesday night.

It's a calculated risk taking Brooklyn on the second night of a back-to-back, but the crazy train keeps rolling, so we might as well keep riding it.

The Indiana Pacers have the NBA's best home-court net rating for the month of March. The Nuggets have the league's best road net rating during that same span.

This is going to be fun.

Yours truly keeps picking against the Pacers at home and getting burned. But they are the definition of average, while the Nuggets have shown they can light up even really good opponents. It's tough to give this contest to them strictly because they have Paul George.

Crap is hitting the fan for the Detroit Pistons. They are 1-5 since the start of March, with a bottom-five net rating. Head coach Stan Van Gundy benched Reggie Jackson for Ish Smith on Wednesday to infuse some life into his troops, and it didn't work. The Pistons were thumped by the Chicago Bulls.

Watch close enough, and you can see traces of a good team in the Pistons. Ish Smith has generally been better than Reggie Jackson with the starters all season, and the Orlando Magic are only talented enough to beat teams like the Philadelphia 76ers and Phoenix Suns.

Even if the Pistons aren't perfect, they should still get the win here.

This is a genuinely tough line.

The Houston Rockets have third place in the Western Conference wrapped up. They don't really have anything to play for now. That paves the way for bad habits and rest nights and losses that should have been wins.

But the Rockets are well aware of the blowout they suffered at the hands of the New Orleans Pelicans a little while back. They want revenge for that, and their brand of offense doesn't mesh well with a Pelicans' attack that is still stagnant as it tries incorporating both DeMarcus Cousins and Anthony Davis.

The three-point differential alone can, and should, be enough to help the Rockets cover.