Cigar, Dubai Millennium, Curlin and, most recently, California Chrome are recent winnners of the Dubai World Cup race. From only seven starts, Arrogate is already regarded as horse racing’s latest superstar and will try on Saturday to add the $10 million Dubai World Cup to his already impressive resume.

The four-year-old son of Unbridled’s Song carries the colors of Juddmonte Farms, one of the most decorated breeding and racing operations in the world.

Arrogate burst on to the national scene last summer with a record setting victory in the Travers Stakes (G1) in which he shattered the track record and defeated a quality field by 13 ½ lengths. From there, he went on to win both the Breeders’ Cup Classic (G1) and the inaugural running of the Pegasus World Cup (G1) which inflated his career earnings to just over $11 million.

Trained by Bob Baffert, the colt has been training well since shipping to Dubai and had three sharp workouts at his home base of Santa Anita prior to making the trip. He will have regular rider, hall of Fame jockey Mike Smith, in the irons. 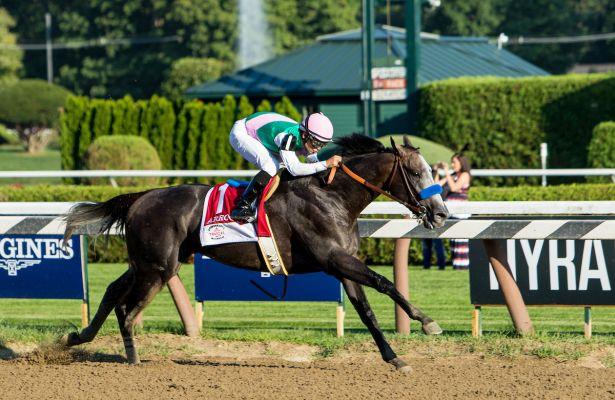 While the race has assembled a competitive and international field, his main opposition may come from familiar foes who have also made the trip from the United States. Gun Runner, third in the Travers Stakes (G1) last summer, has been the model of consistency and has developed a reputation for being a horse who runs his race nearly every time.

The chestnut son of Candy Ride (ARG) is trained by Steve Asmussen, and after electing to skip a rematch with Arrogate in the Breeders’ Cup Classic (G1), went on to finish second in the Breeders’ Cup Dirt Mile (G1). Since then, he has notched two victories against graded stakes competition.

Keen Ice may not be known for his consistency but he will always have one major distinction – he is one of only two horses to ever defeat Triple Crown champion American Pharoah.

He has won only two of his 20 starts and will be making his second trip to Dubai – he finished eighth in last year’s edition. His trip to Meydan last year sidelined him for nearly seven months and, after a third-place finish in an allowance race, he ran third behind Arrogate in the Breeders’ Cup Classic (G1). He was last seen finishing fourth in the Pegasus World Cup (G1), and with a step forward could be a factor from off of the pace to round out exotic wagers.

Arrogate will also face competition from his stablemate, Hoppertunity, who will be trying to improve off of a third-place finish in last year’s Dubai World Cup. The well-traveled veteran has an advantage over several rivals in that he has proven he can make the massive trip to Dubai and run his typical, competitive race. He is coming out of a sharp victory in the San Antonio Stakes (G2) at Santa Anita.

Here is the field for the 2017 edition of the Dubai World Cup.