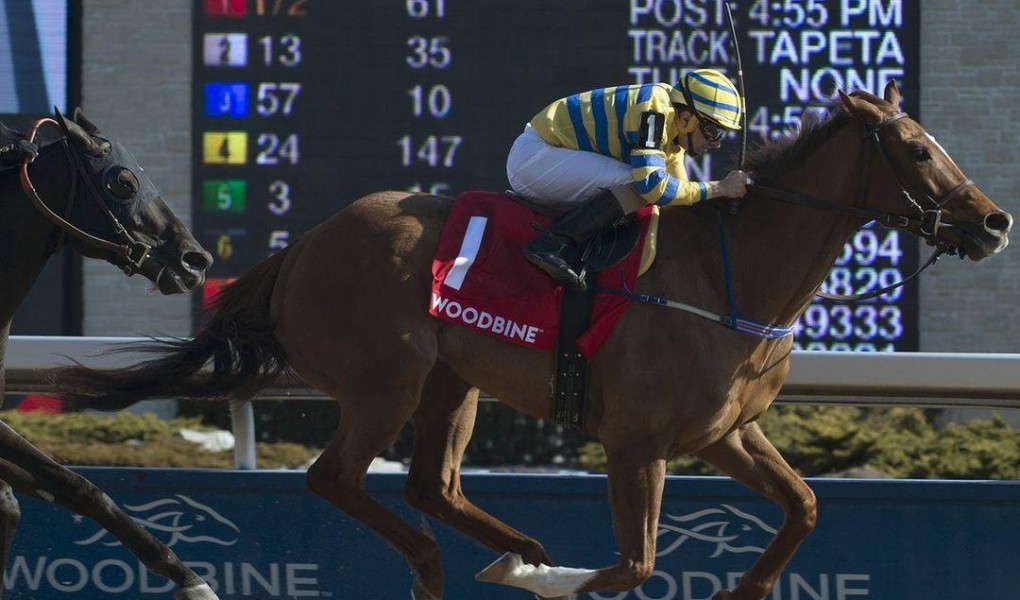 Run on the Woodbine all-weather track, the 2018 Coronation Futurity has drawn a field of seven to race 1 1/8 miles, with three solid contenders and four double-digit longshots available for betting at Bovada’s racebook.

Leading the way in the morning line odds at 6-5 is Avie’s Flatter, whose half-sister Ami’s Flatter is a graded-stakes winner in the US. Avi’s Flatter won his first career race on the All-weather track back in June, and was then switched to turf to run fourth in the (G1) Summer Stakes and last out stayed on turf to win easy in the Cup and Saucer Stakes at 1 1/16 miles.

On paper he’s the best horse in the race, and that debut win indicates he should run okay going back to the all-weather track, although he does seem a bit better on grass. He’s a deserving favorite, but this will be a tough test.

US Jock Ships In To Ride Tripwire

Trainer Michael Maker will be calling on the services of top US jockey John Velazquez to try and turn the fortunes for Tripwire, second choice in the ML at 2-1.

Winless in two starts lifetime, Tripwire has been knocking on the door in both those efforts, last time out running second in the (G3) Grey Stakes at Woodbine beaten just a half-length racing 1 1/16 miles. Prior to that he was third in his career debut.

Another step forward off his last effort puts Tripwire in with a solid chance here.

Breaking from the far outside, trainer Mark Casse has the most experienced runner in the field in the form of 3-1 ML choice Federal Law. The Coronation will mark his seventh start of the year, which began in England where he picked up one win and one second-place finish in four starts.

Casse then brought him to Woodbine to run 11th in the Summer Stakes, but last time out he was switched to the all-weather track and came flying through the stretch to get up for a two-length win. He doesn’t appear to have the overall speed of the top two here, but seems a logical choice in exotic bets.

If there’s an upset chance in the field it could come from D Magician at 12-1 in the ML odds. He was fourth in his career debut against a couple that have come back to win again, and then moved to turf where he went wire-to-wire to pick up his first win.

He’s another where turf may be his best surface, but he’s had two good works on the all-weather track since that last race, and that effort was impressive enough to try and find a way to use him on a ticket here.

Betting horse racing online gives you the chance to play the horses at all the top tracks in North America and around the world, such as Woodbine.

Check out these online racebooks to find the right one for you.